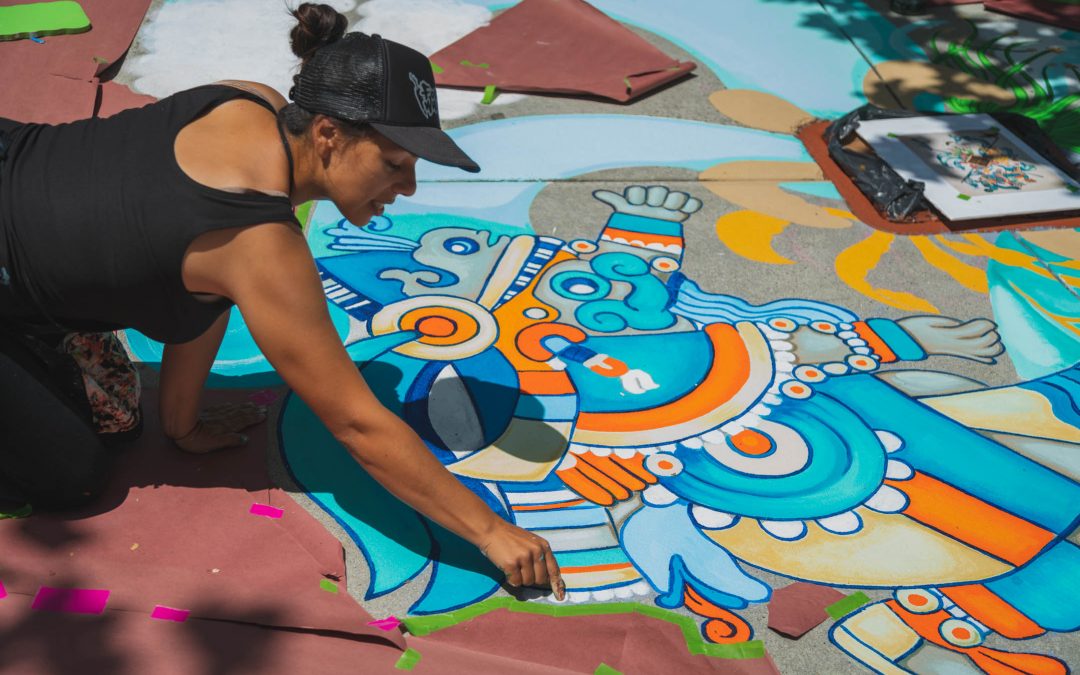 Storm drain murals beautify and increase public art in local neighborhoods, a priority for river neighbors, and help people visualize how their local storm drain is connected to the San Lorenzo River and Monterey Bay. Over the past year, community members from three riverside neighborhoods have worked with the Coastal Watershed Council (CWC) to bring new storm murals to life. Neighbors helped to select the artist to install their neighborhood’s mural and provided input on mural design, further strengthening connections between community, culture, stewardship and the San Lorenzo River.

The first storm drain mural was installed on Pryce Street in June 2019. Artist Ralph D’Oliveira led a community painting day on Saturday, June 9th with Pryce Street residents and friends. A total of 21 community members helped out during the painting day, including children and adults. The Pryce Street mural depicts a beautiful streambed and many beloved aquatic species found in the San Lorenzo River, such as rainbow and steelhead trout, coho salmon and western pond turtles. Following the community painting day, Ralph also installed a second mural piece featuring a clever raccoon peeking out from a storm drain. 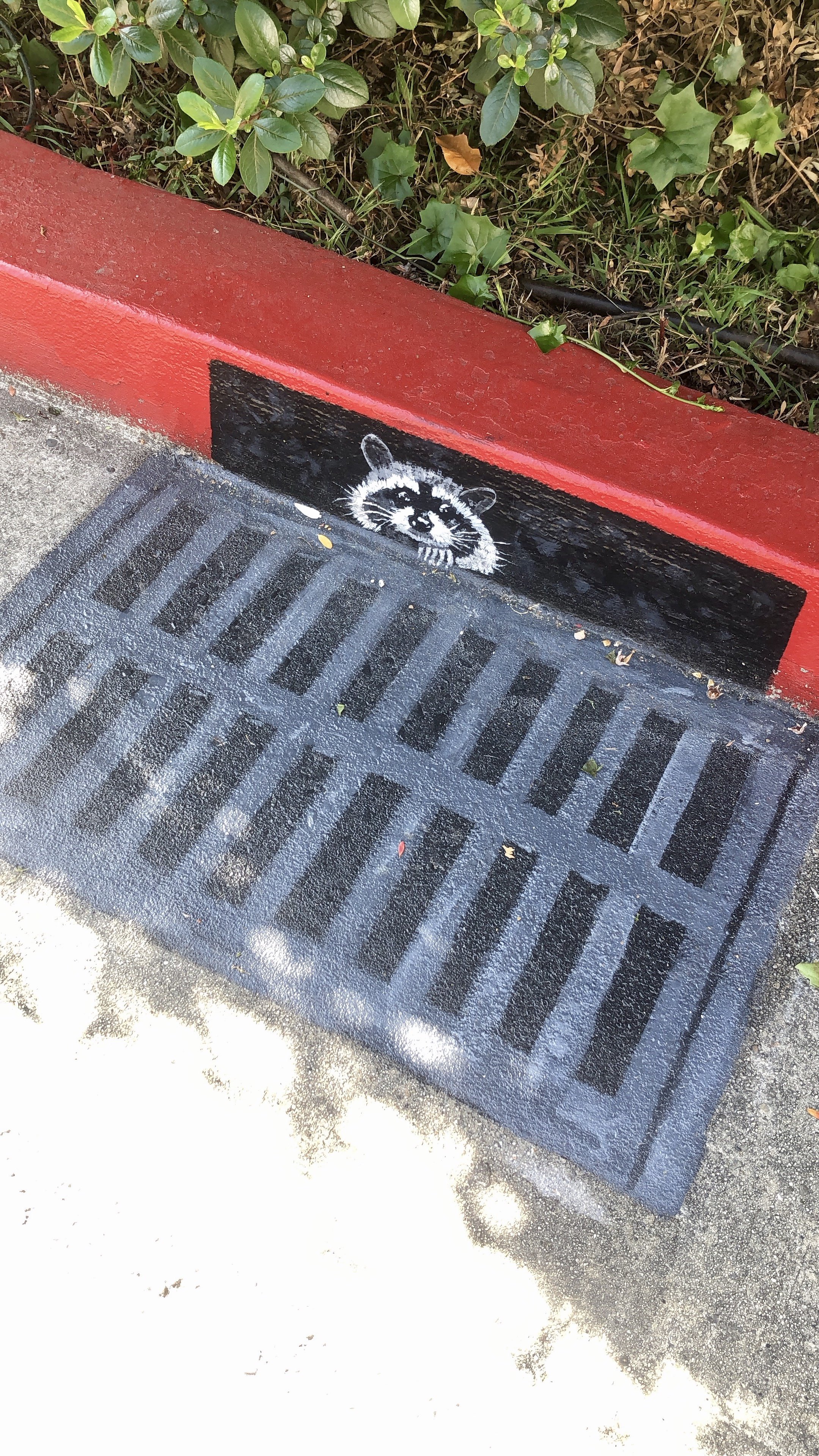 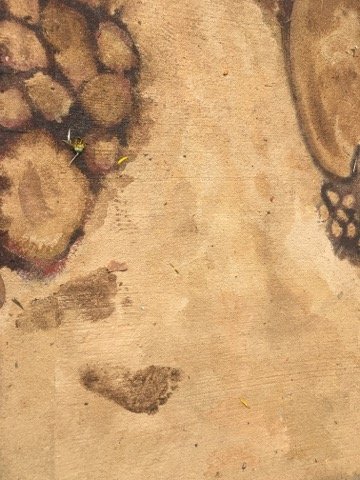 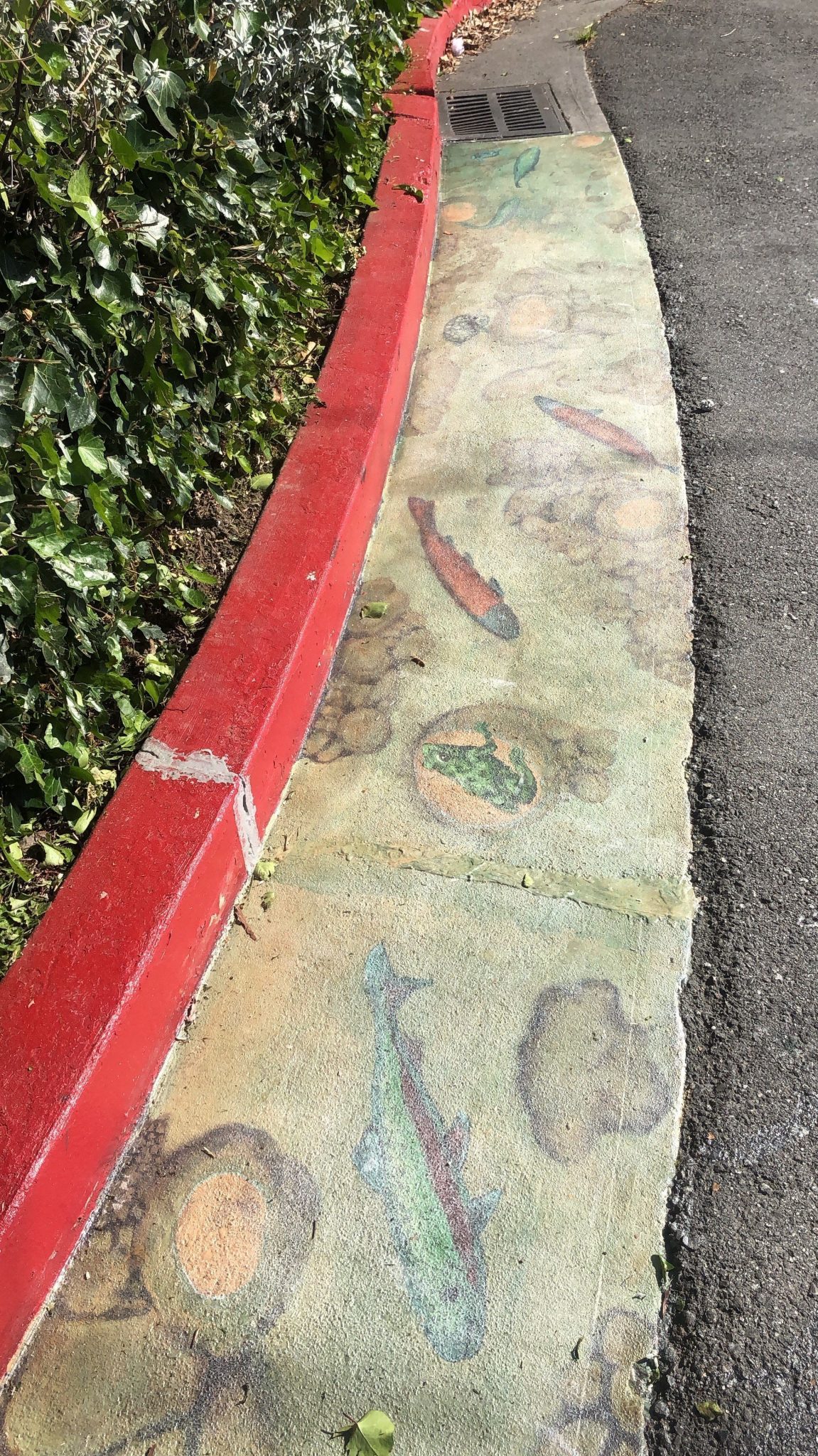 One special moment from the Pryce Street community painting day was when two children who live on Pryce Street got to put their footprints in the sandy streambed. We hope they can revisit this public art piece as they grow and be reminded of their connection to the river in their backyard.

During the Beach Flats mural installation, CWC staff reconnected with Nicole, who had attended the Watershed Rangers after-school program in the neighborhood six years ago. While she’s no longer a Watershed Rangers participant, she brought her little sister to the event to paint the mural that connects to the San Lorenzo River. Everyone who attended had the opportunity to pick up a paintbrush and contribute their own little piece to the mural. The day was filled with neighbors meeting neighbors, youth connecting with professional artists and passerbys stopping to learn more about Tlāloc and this critical piece of stormwater infrastructure. 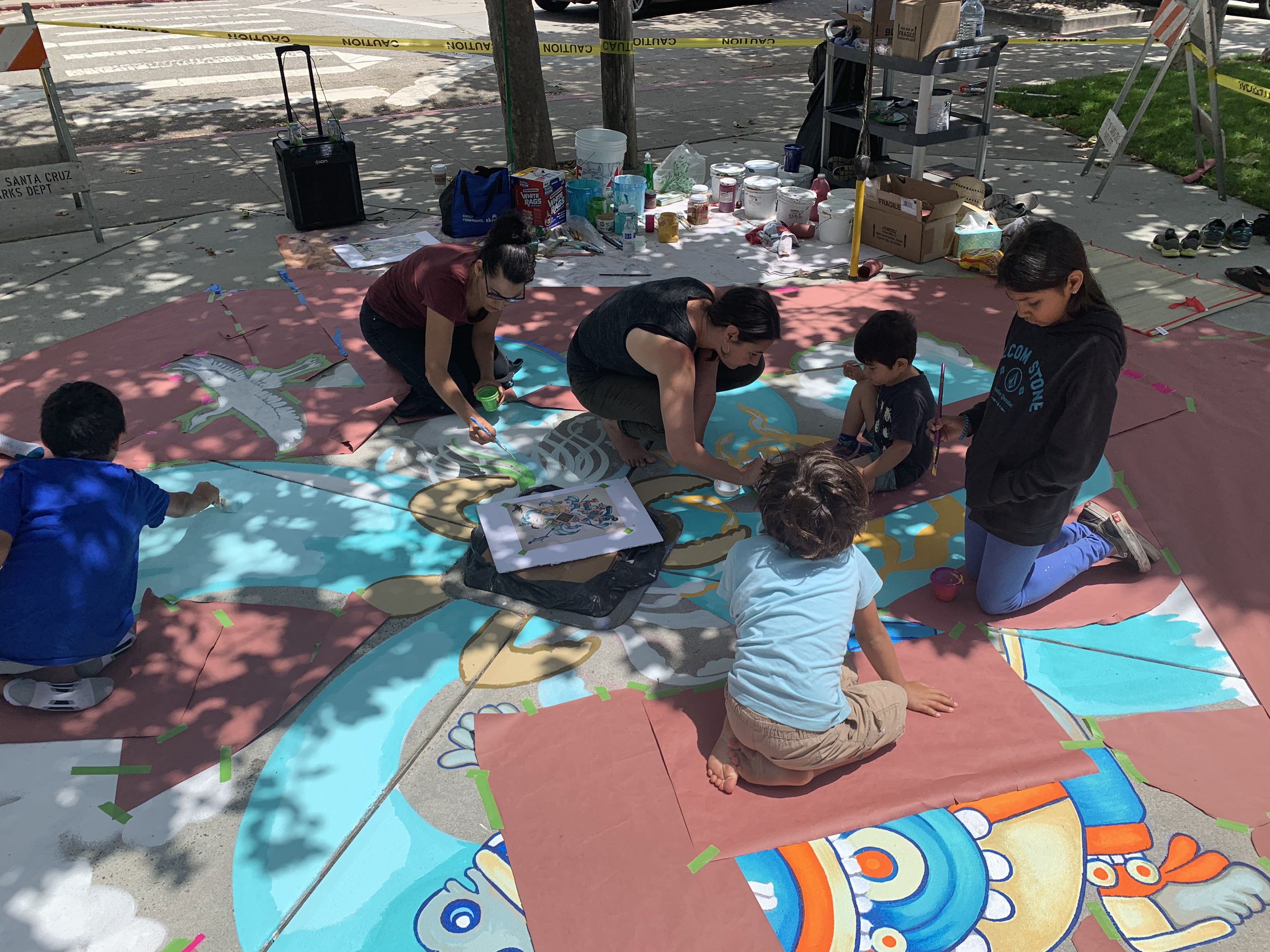 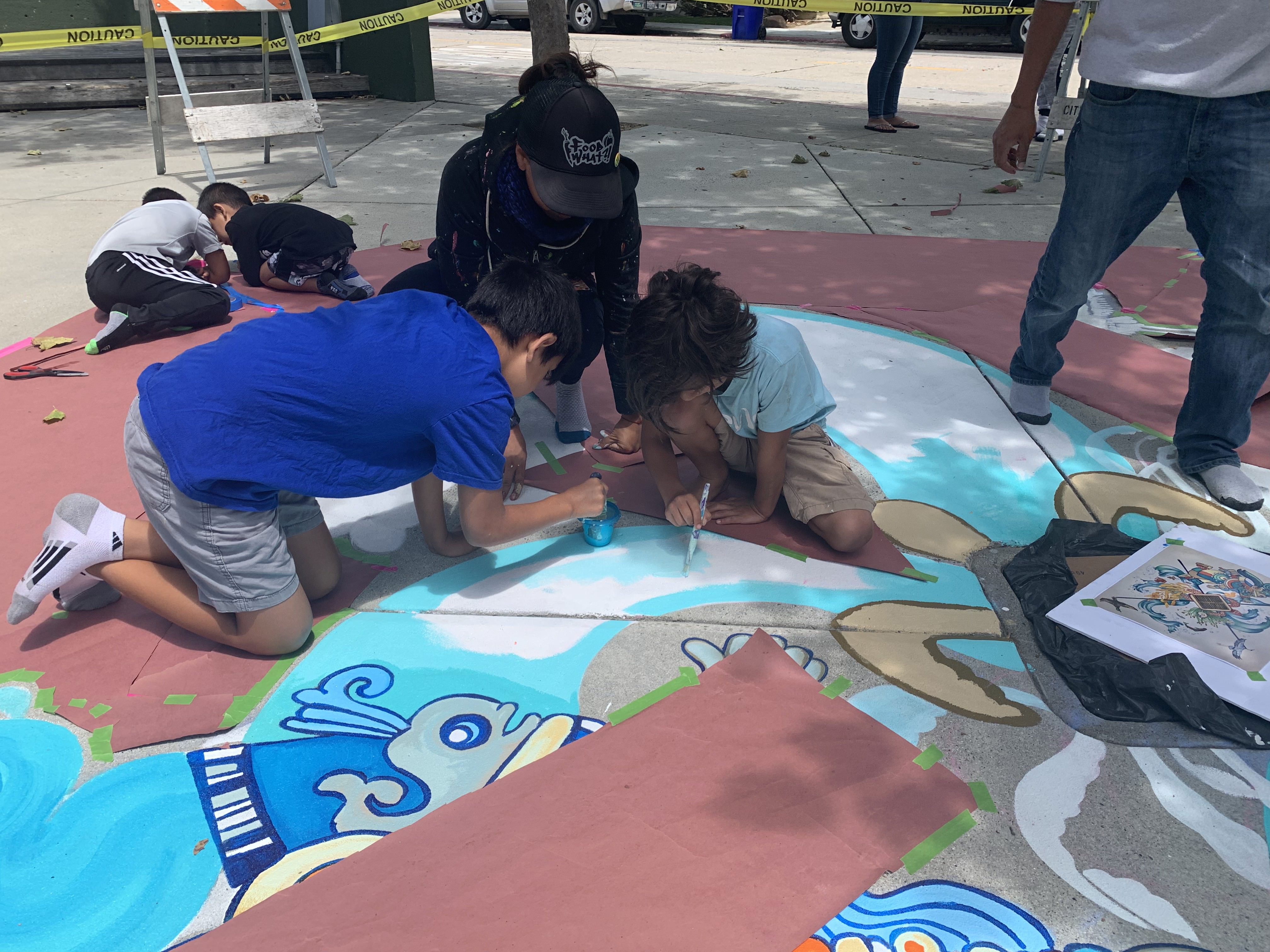 Artist Daniel Velasquez led the final community painting on Felker Street on Saturday, August 24th. A total of 56 residents and community members helped install the mural, including 15 youth and 41 adults. The Felker Street mural celebrates the community, wildlife and recreation opportunities that are central to the San Lorenzo River and the broader Monterey Bay ecosystem. For example, it features Felker Street’s famous feline Eddie the cat, pays homage to local recreational opportunities with a beachball and fishing bobber, and also depicts animals and plants that residents feel a particular connection to, including a pelican, beaver, racoon, fish, egret and a California poppy. During the mural installation, it was touching to witness Carol and Murray Walker, long-time residents of Felker Street, paint their beloved cat Eddie on the sidewalk. When approached by several other eager painting volunteers, Carol and Murray didn’t hesitate to turn over their brushes and let other neighbors participate in bringing Eddie to life in paint. At the end of the day, Murray and Carol were able to give the mural its finishing touch by inscribing Eddie’s name on his image, ensuring all those who visit the mural will also get to know the neighborhood cat who has touched so many lives. The Felker Street mural and community painting day transformed what used to be an overlooked cul-de-sac into a community gathering area and point of pride while emphasizing the special connections this community has to the river in their backyard. 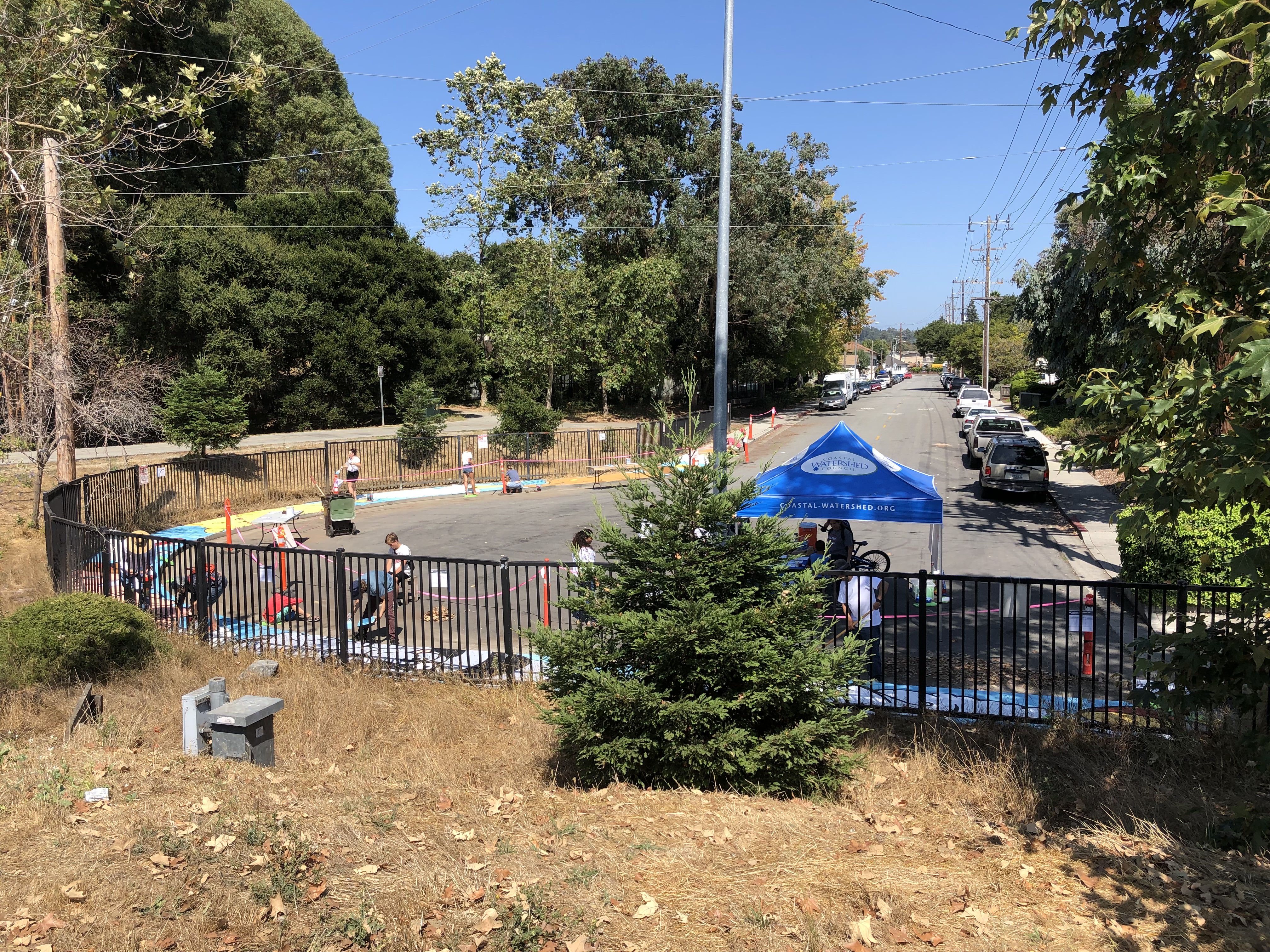 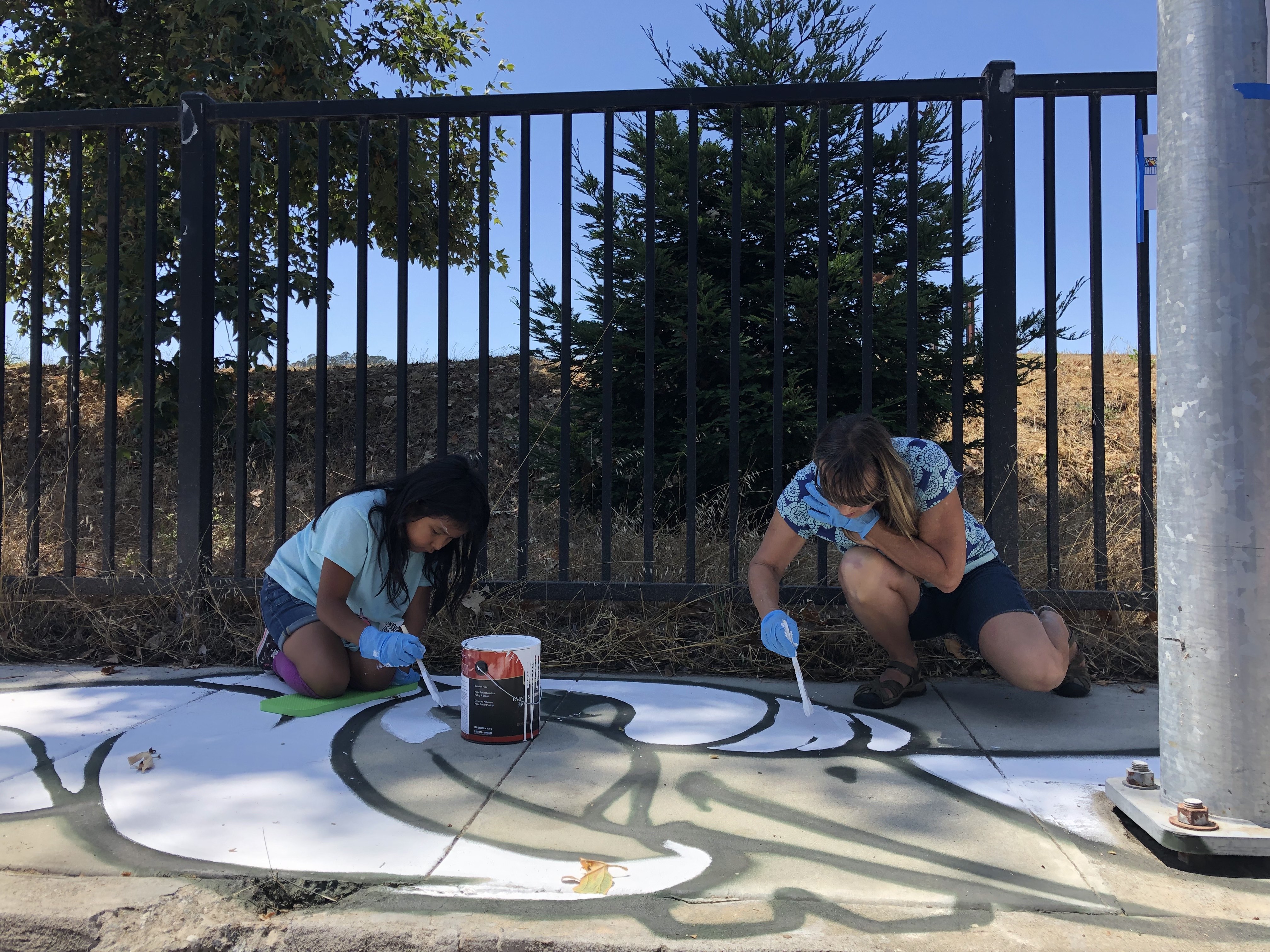