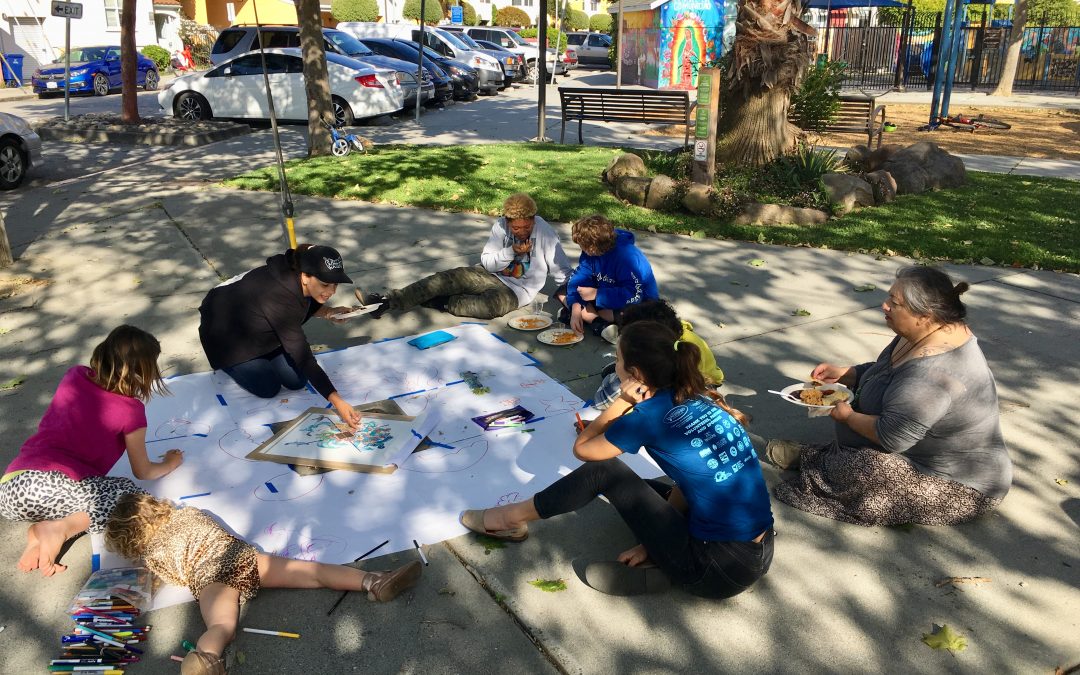 Thank you to all the Beach Flats community members who gathered on May 3rd to help design storm drain art at Beach Flats Park!

Beach Flats is one of three riverside neighborhoods that will be collaborating with the Coastal Watershed Council, the City of Santa Cruz, and local artists to co-create storm drain art. This stormwater education pilot program is intended to inspire enhanced stewardship by drawing attention to how pollution from streets and sidewalks can enter the San Lorenzo River. Engaging and colorful storm drain art delivers multiple benefits: it highlights storm drain infrastructure, brings awareness to neighborhood river connections, beautifies local streetscapes and reflects the unique identity and culture of each neighborhood.

Using paper taped around the existing storm drain at the park, community members of all ages used markers, colored pencils, and watercolor paints to add to Irene’s proposed design. Building on the river overtones in this existing park mural, Irene’s proposed design features Tlāloc, a “Mexica deity of waters, seas, rain, sky, and all watersheds”, as well as beloved animals and plants found along the lower San Lorenzo River. The storm drain itself is even incorporated into the mural, acting as the shell of a sea turtle. Suggested additions include a variety of aquatic animals found both in fresh and salt water, including lamprey, sharks, bat rays and different types of fish.

While considering and contributing to the mural, community members also enjoyed music and home-cooked food from Vrinda Quintero, a Beach Flats neighbor and community organizer and a much-appreciated River Champion!

Next up, Irene will integrate community suggestions into the final mural design and then present the design for approval by the City of Santa Cruz Arts Commission. Once approved, community members will be invited to participate in the actual painting of the storm drain mural later this spring!