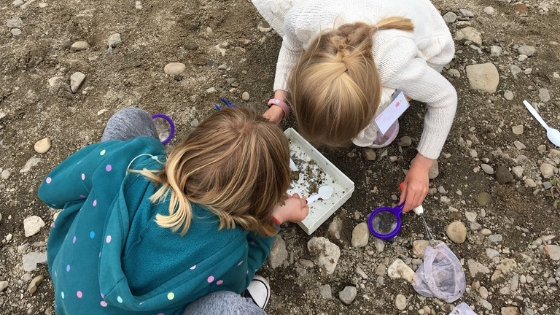 CWC’s Watershed Rangers summer programs are an incredible opportunity to connect youth to the San Lorenzo River Watershed. Through several field trips, students recognize the scope of the San Lorenzo River’s existence in their own backyard and beyond the city limits of Santa Cruz. Because of this program, 107 youth will discover that summer isn’t sleeping until noon and playing video games until dark, but a chance to explore what makes our community thrive and how we can contribute to its health in a fun and meaningful way.

One summer afternoon as students explored the banks of the San Lorenzo River, CWC Environmental Educator Sam Adelson heard, “There are too many baby fish! I can’t count them all!” It was a Watershed Ranger who was investigating the San Lorenzo River as it flows underneath the Chinatown pedestrian bridge in downtown Santa Cruz. Whether these young Watershed Rangers have binoculars, a paintbrush or magnifying glass in hand, they love exploring the river. There is never as much trash as students think there will be, and the water is always clearer than they expected. While some students capture the moment at their sit-spot using watercolor kits, others use dip nets at the river’s edge to collect and observe benthic macro-invertebrates (little water bugs, food for fish and birds). Bird watching with binoculars turns to rabbit watching, squirrel watching, and even turtle watching! The hardest part is getting them to leave the banks of the San Lorenzo River at the end of the day.

Watershed Rangers transforms the way Santa Cruz sees the San Lorenzo River, beyond the youth participants. It is not uncommon to look up from our bird watching station along the San Lorenzo in downtown Santa Cruz to see people peering down at us with a smile from the pedestrian bridge overhead. Students feel like celebrities and scientists at the same time while they communicate their observations with onlookers.

Upriver from Santa Cruz, the massive redwoods and beautiful curves of the San Lorenzo River in Henry Cowell Redwoods State Park are as exciting to the ultra-enthusiastic Watershed Rangers as counting banana slugs and imagining life as a native Ohlone youth thousands of years ago. Talk of video games and movies evolves into discussing the benefit of California hazelnut’s fuzzy leaves. Wading in the slowly meandering San Lorenzo River at Henry Cowell is a treat for everyone, especially for those students who have never had the opportunity to feel the sandy river bottom beneath their feet.

CWC’s educators, Sam Adelson and Mollie Behn, also bring young Watershed Rangers and accompanying chaperones to the headwaters of the San Lorenzo River at Loch Lomond Recreation Area, where they are surrounded by the source of much of their drinking water. Youth connect with nature through hikes, games, art projects and free time to explore the forest using scientific equipment. Loch Lomond is a great place to learn about water resources and forest soils, and it’s also a great place to relax and be thankful for all that we have.

CWC’s summer programs could not be possible without the coordination and strong partnerships with the Santa Cruz County Animal Shelter, Nueva Vista Community Resources and Boys and Girls Club of Santa Cruz and generous donors including The Richard and Susan Beach Family Fund, Robin & Doug Engfer Charitable Foundation and The David and Lucile Packard Foundation. These partners and donors support Santa Cruz youth in their growth in so many ways, and the Coastal Watershed Council is grateful for the opportunity to foster the relationship that youth develop with the San Lorenzo River. You too can support CWC’s summer camp programs with a donation today.