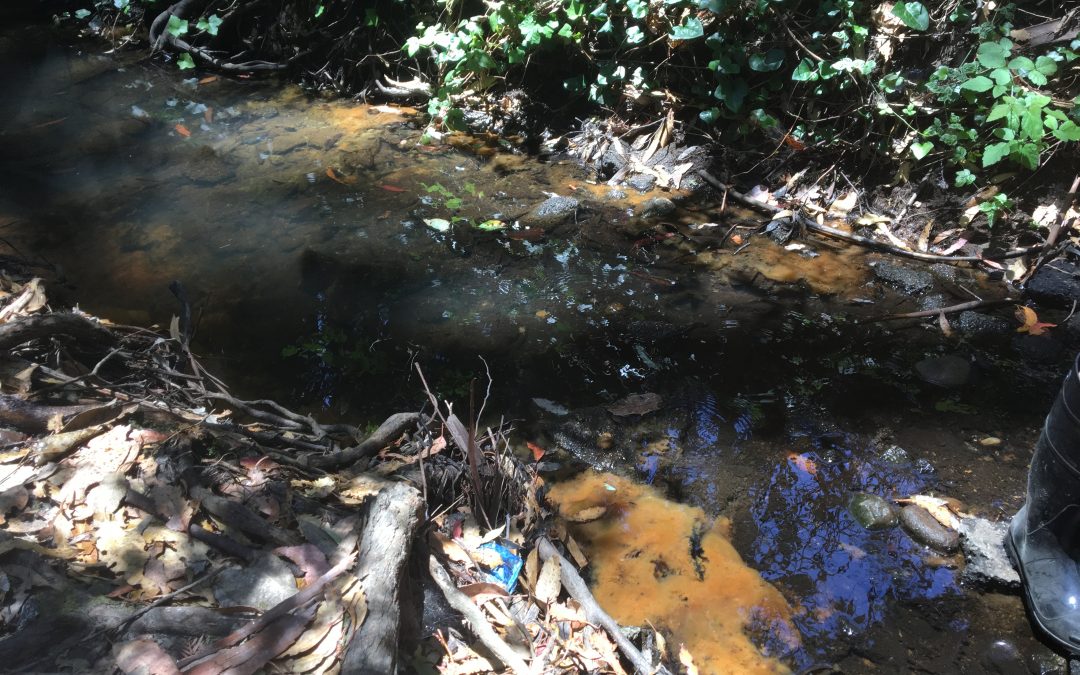 It’s impossible to ignore that there is something special going on at Noble Gulch.  A block from Highway 1 and shrouded by eucalyptus and ivy, this trickling stream has clouds of bright orange! For weeks, the Urban Watch volunteers had trekked down to the Noble Gulch at Highway 1 site to monitor the water quality and wondered about this orange substance. 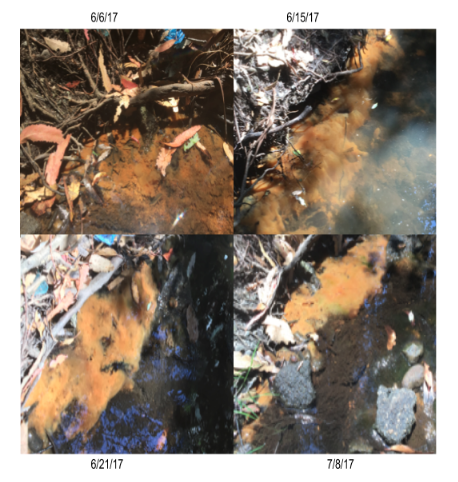 This mystery was too good to pass up! I decided to investigate what could be causing these orange deposits and if it is harmful or a sign of pollution. I started my investigation at the gulch, studying the stream environment for clues. Noble Gulch is a small tributary to Soquel Creek that runs from Soquel to the City of Capitola. At the Noble Gulch at Highway 1 site, the creek has little water and trickles through rocky riffle that eventually pools up against the mouth of a wide storm drain tunnel that transports water under Highway 1 Bridge. I decided that if I wanted to solve this mystery, I had to jump into this investigation with both feet. I started by studying the physical features of the creek. Here is what I found: 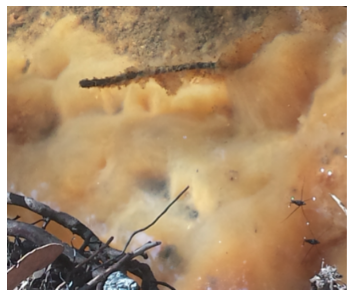 The orange rust-colored deposit was most prevalent along the sides of the pooled area. The deposit hugged one side of the bank and floated below the surface of the water all through the water column. Like all good scientists, I started my investigation by poking it with a stick. To my surprise, the stick passed through it like a cloud- there was no resistance. My motion had disturbed the substance and it swirled in the moving water and then drifted downstream. I noticed several water striders hovering above the cloud. It must not be toxic. 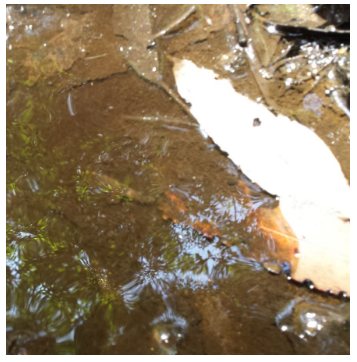 Adjacent to the orange cloud was a cloud of black flakey pieces floating in the water. When I disturbed the water, the black flakes just swirled around on the bottom and then settled back down in the river bed like debris. Was it dead plant material? 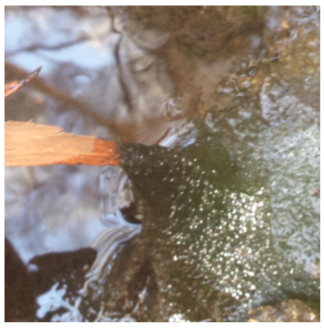 Next I poked at the mass of deep green algae growing up along the rocks above the riffle. The stick got caught on the algae. As I pulled, it stretched and revealed a thick, almost cloth-like filamentous mat. 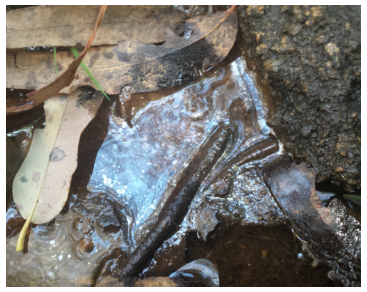 In eddies along the banks of the stream, an oily sheen sat on the surface of the water. I gently moved the stick through the oil sheen and unlike oil, which tends to bind back together, this fractured into smaller separate parts.

The creek bed was littered with plant material from the tall trees surrounding and oddly enough, some of the plant material was turning white! Was the water acidic? Was this something acorns do in all bodies of water? But I wasn’t done yet. I began looking around for anything that might possibly be a clue to what these physical indicators were or what might cause them. I started checking the local area to see if the surrounding habitat could be influencing the water quality.

Both banks of Noble Gulch are stabilized by tree roots, short grasses, and vines. The eucalyptus trees grow tall above the creek while the scattered alder provide understory shade. A lone redwood stands adjacent to the pooled area of the creek. The constitution of one stream bank is a fine sandy silt with gravel and decomposing organic matter. Were any of the surrounded stream vegetation causing the orange clouds? Eucalyptus is known to decrease soil nutrients and dry up springs. Could this process be leaving behind a higher concentration of  pollutants, thus causing the orange color? 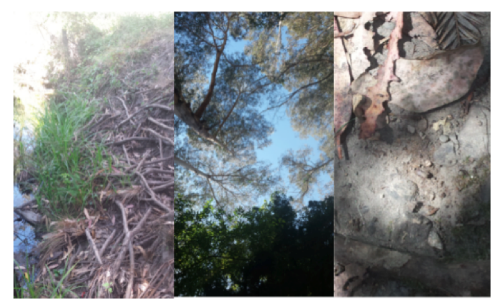 Then I noticed, just meters downstream of where I was standing, orange slime was coming out of two pipe mouths that were embedded in the concrete wall on either side of the tunnel. I couldn’t see the entire length of the pipe but I could hear the deafening sounds of cars and trucks just beyond the hill. These pipes must be part of the drainage system for Highway 1! 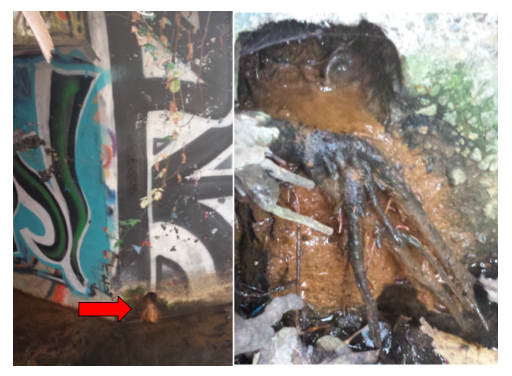 I took a closer look at the opening of the pipes and noticed layers and layers of orange slime oozing out. The runoff had stained the concrete wall below the pipe opening all the way down to the surface of the water. From there, the orange cloud crept along the sides of the pooled creek. Why were there orange clouds concentrated in one area? Could the chemical causing the orange color have dispersed through the stagnant water? Was there more than one source?

I trekked up the streambed to see what I could find.

Upstream of the site was an area of covered in dead wood scraps, remnants of a tree management project. Further upstream I noticed there was another pipe, this time bigger and suspended above the banks of the creek. I followed the pipe up to the road and found the storm drain it connected with. A paved private residential road was angled so that the water was all emptied into the storm drain. The road itself held an interesting clue. 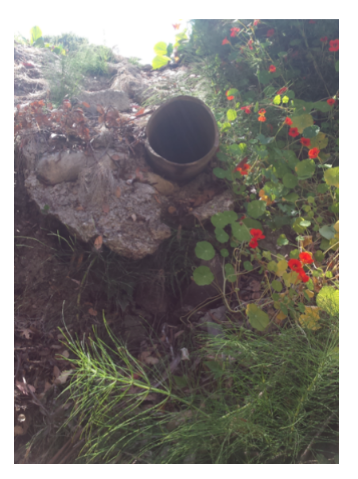 On the road, white watermarks indicated old water paths to the stormdrain. I knelt on the asphalt and studied the marks. Barely visible I could make out slightly orange tinge in the water marks! 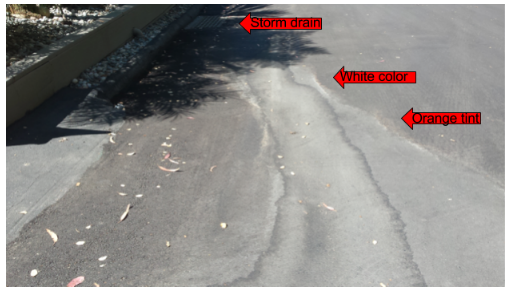 Now that I had catalogued the physical characteristics of the stream I decided to take a look at our chemical properties of the water in the creek to see if there were ties between water quality and the physical manifestations of the stream. During Urban Watch, monitoring volunteers use a YSI multiparameter probe to gather information about the water chemistry at seven sites along Soquel Creek and Noble Gulch. Here’s what I found

Conductivity, or the ability of the water to conduct electricity based on the concentrations of ions and alkalis, is one measurement that can tell us the amount of metals or dissolved inorganic material present in the water.

It is important to note that conductivity levels for freshwater range between 100 and 2,000 uS/cm and are impacted by a range of factors such as flow of stream or the volume of water passing through the system or geology of the area. If there is very low flow, as in the case of Noble Gulch at Highway 1, then ions can concentrate, thus increasing conductivity. Conductivity can also be impacted by the presence of dissolved solids.

Total Dissolved Solids, or TDS, quantifies the dissolved and suspended salts, minerals, and metals in the water. TDS can include suspended nitrate, chloride, sodium, magnesium and iron and is often spiked from causes like wastewater leaks and urban runnoff. Highway runoff with high levels of suspended material would also increase the TDS. The Noble Gulch site at Highway 1 has high TDS, which may be caused by highway runoff and support our hypothesis that materials from the highway are running into the river!

Now that I had identified some physical and chemical factors it was time for a quick Google search to identify correlations or causations. Some key words: orange cloud and slime, high conductivity, oil sheen. Here’s what I found:

Across the United States, counties are identifying harmless iron-oxidizing bacteria in their urban streams and most common in slow moving bodies of water, often with warmer water temperatures. Iron-oxidizing bacteria is easily recognizable by its orange-brown cloud, and more specifically, an oily sheen that breaks apart when disturbed, just like what we examined Noble Gulch. Here’s how it works:

Oxidation is a process by which a substance loses an electron to another substance thus transforming the substance. Iron oxidizing bacteria convert iron in the form of water-soluble ferrous into insoluble ferric by removing a single electron. This process, known as chemosynthesis produces energy to sustain the bacteria.

The iron-oxidizing bacteria in the stream create the orange cloud in a two-step chemical reaction:

When water levels contain more organic material than dissolved oxygen necessary to complete oxidation, iron-reducing bacteria can convert ferric iron and turn it into ferrous iron and oxygen that it can use to oxidize organic material:

Then, Iron-oxidizing bacteria utilize oxygen to oxidize, or take electrons, from ferrous iron and turn it into an orange-brown precipitate of ferric iron:

This chemical reaction may trigger a secondary reaction that forms black manganese dioxide deposits, which might explain the black flakes we saw growing around the orange cloud over time! Interestingly, this series of reactions also requires organic material, such as from gasoline or petroleum leakage. When I read this, I immediately pictured the watermarks from the road, and the two storm drains directly draining highway runoff into the gulch that might be exposed to  gasoline and petroleum leakage. Are the stormdrains making this reaction possible?

And where was the iron coming from?

Iron is the fourth most common element on earth. It is commonly carried into streams from groundwater (because it naturally occurs in rocks), abandoned mine runoff, and storm water runoff from rusted steel (such as rusty storm drains or car parts). I thought back to the white acorns- could the white coating actually be iron? And that orange-tinged white water mark- was that proof of iron running into the storm drain?

I began to compare everything I had seen and researched so far. The physical clues (the orange cloud, black deposit, white acorns, white-orange water mark) and the chemical clues (high conductivity, and high TDS) all support the theory that iron-oxidizing bacteria are present in Noble Gulch and are causing the bright orange cloud!

It turns out, iron bacteria is not harmful to biotic health and in fact has existed in streams for millions of years because iron naturally occurs in bedrock and can leach into groundwater. What we have in Noble Gulch may in fact be a naturally occurring abundance of iron-oxidizing bacteria, exacerbated by urban runoff, that turns the creek a seemingly unnatural orange, but will actually just be flushed out with the next big rains.

This finding only reinforces the importance of understanding our rivers, so that we can begin to understand the degree to which we impact our watersheds. By slowing down to examine our rivers and learn its secrets, we are creating a baseline to discern what is and isn’t caused by us. In this case: don’t judge a stream by its color.

It is important to remember that correlation doesn’t prove causation. To prove for once and for all that this truly is iron-oxidizing bacteria and not a series of coincidences, we have a couple of options. We could sample for iron bacteria and send our samples to a laboratory, or conduct the Biological Activity Reaction Test (BART) which measures the height and color change of bacterial growth in different nutrient levels to identify bacteria. When it comes to understanding the complexities of water, this is only the beginning.