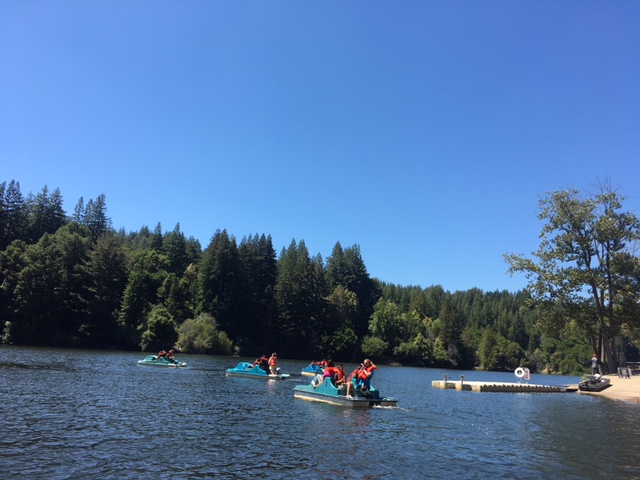 The Coastal Watershed Council’s summer programming is focused on working with local youth to spread awareness of the San Lorenzo River, and to introduce students to their own role in maintaining its health. Youth often grow up in Santa Cruz having visited the river only by crossing over it in a car, despite living only blocks from its banks. We seek to remind these kids of their nearness to the river, and show them what there is to enjoy along it. With these summer activities students are able to experience the river in a proximate and active context. I have been working as an intern here through the past month, and have been able to plan activities and work with elementary school youth through our partnership at the Nueva Vista Community Resources and the Santa Cruz Boys and Girls Club.

Over the past month, youth explored the watershed via a Roaring Camp Railroad train ride, following the San Lorenzo River through the redwoods and experiencing the many different environments that can be found along its length. And despite some initial squeamishness, two youth caught fish during our paddleboat ride at Loch Lomond Reservoir. You might have seen youth from Santa Cruz Boys and Girls Club investigating different sources of bacteria in the San Lorenzo river, and learning about why that bacteria is harmful. This past week campers searched the San Lorenzo riverbank for native wildlife and see what that bacteria can endanger native wildlife. We were able to find many native plants hardy enough to survive under bridges and alongside busy streets, such as sticky monkey flowers (Mimulus aurantiacus) and california poppies (Eschscholzia californica), and native birds like the snowy egret and american coot. This week, youth will be investigating the dangers that pet waste poses to the river and how to be responsible for our animals.

Later this summer we plan to bring campers to the water’s edge in order to measure indicators of its quality and talk about river health. Most importantly, we are bringing kids to the water for new, positive experiences with the San Lorenzo River that I am excited to share.