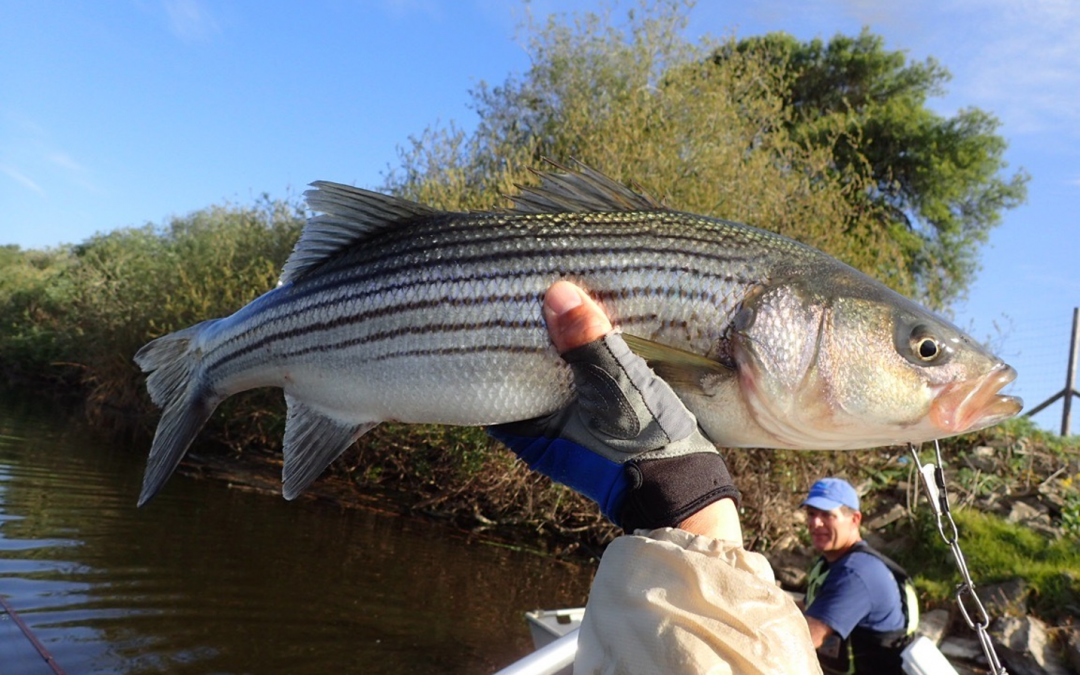 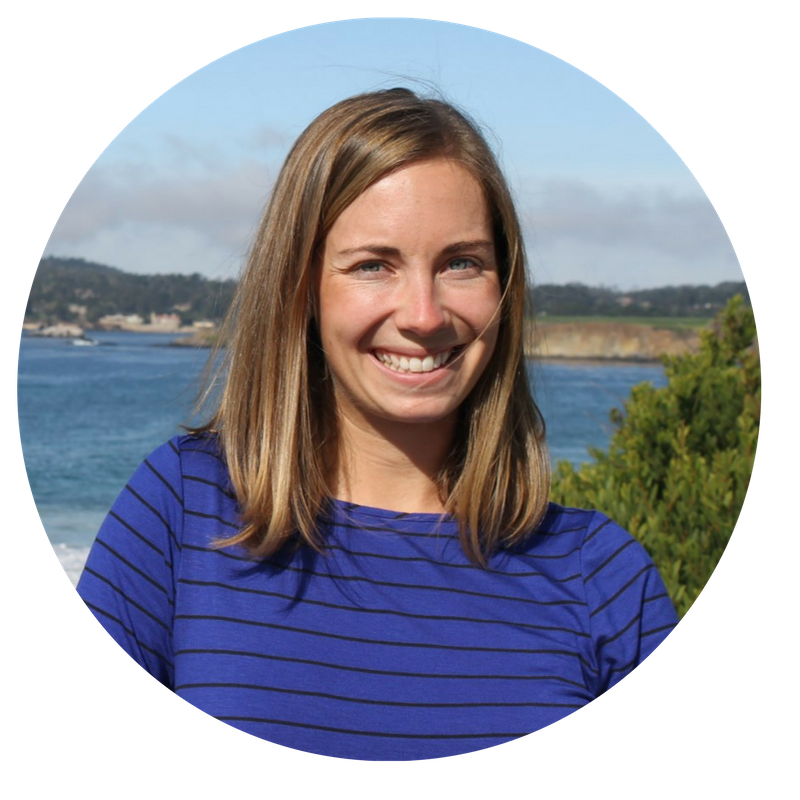 Striped bass (Morone saxatilis) are anadromous fish that spawn in freshwater and travel to productive ocean waters to reach impressive sizes. Within this general migration pattern, striped bass exhibit an amazing amount of diversity in their movement patterns (Chadwick 1967). Some bass live their entire lives in freshwater without traveling to the ocean, while others travel extensively in the Pacific Ocean. Striped bass are strong swimmers and can travel vast distances spanning both freshwater and marine habitats. To fuel this active lifestyle, striped bass have a large appetite (Loboschefsky et al. 2012). They travel and hunt in schools, roaming in rivers, deltas, oceans and lagoons while feeding on a wide variety of fish and invertebrate prey.

These prized game fish are native to the U.S. east coast, and 132 bass were planted in the Sacramento River in 1879 to start recreational and commercial fisheries. Striped bass populations persisted, thrived and supported a commercial fishery that harvested over 1 million pounds a year (Stevens and Kohlhorst 2001). The California Department of Fish and Wildlife actively managed and stocked striped bass until 2001 when concern arose over striped bass consumption of endangered salmon and delta smelt. Now striped bass live in the Sacramento-San Joaquin Delta, associated river tributaries, San Francisco Bay, nearby coastal waters. They even show up in the San Lorenzo River’s coastal lagoon!

City of Santa Cruz Water Department and Hagar Environmental Sciences seine the San Lorenzo lagoon each year to observe the fish community and monitor salmon populations. Striped bass are not usually present in their sampling, but mysteriously show up in large numbers from time to time. In 2015, 37 striped bass were caught by the biologists in just a few days! They showed up again in 2016, and a whopping 71 striped bass were caught this last June (Hagar 2016 and 2017). Striped bass enter the lagoon from the ocean when the estuary mouth is open, but do not spawn in the San Lorenzo as far as we know. 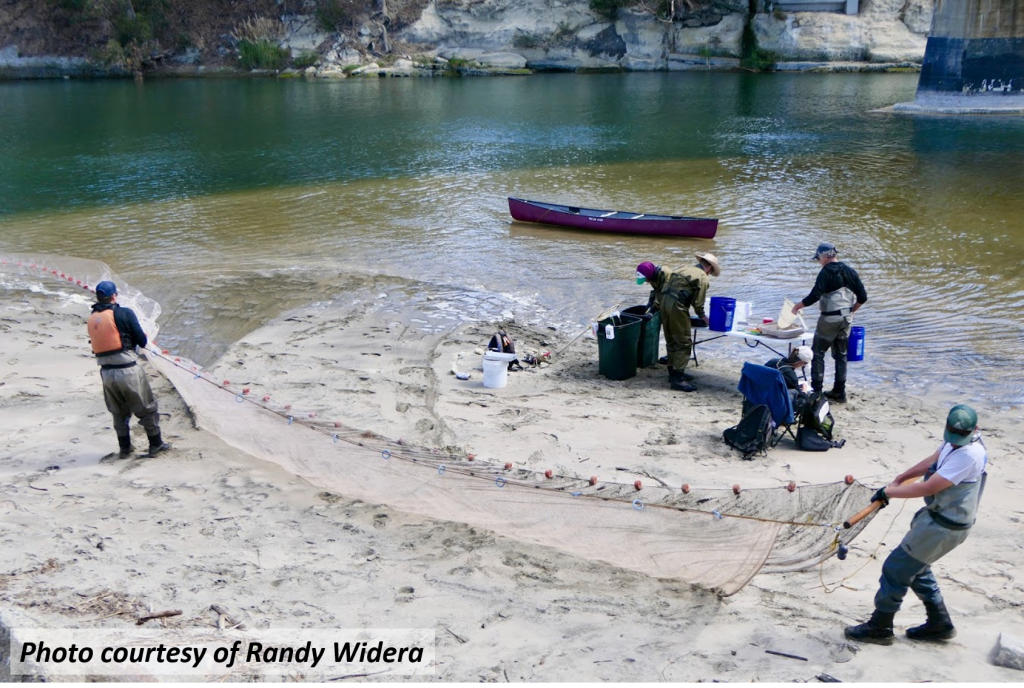 Anecdotal information indicates that striped bass presence in the San Lorenzo River lagoon is not a new occurrence and that they have been occasionally present for decades (Jon Bombaci, personal communication to Chris Berry, June 28, 2017). State and federal biologists have also observed striped bass in other lagoons along our coasts, including the Salinas, Pajaro and Carmel Rivers.

Many mysteries remain with these fish. What are striped bass doing in coastal lagoons? Do they spawn in local rivers? Or do they travel all the way down from spawning locations on the Sacramento River? Why do they only show up in some years? What is the impact of these nonnative striped bass on the native ecosystem? Striped bass are known to prey on native and threatened salmon, but the extent of predation and population consequences are unknown. Fortunately, scientists at California Department of Fish and Wildlife and the NOAA Fisheries South-West Fisheries Science Center are committed to discovering more about the basic ecology of California striped bass in our local lagoons. They have plans to estimate striped bass population sizes, movement patterns and distributions. This information will be valuable in assessing threats to native species, guiding management and helping us learn more about this fascinating fish. 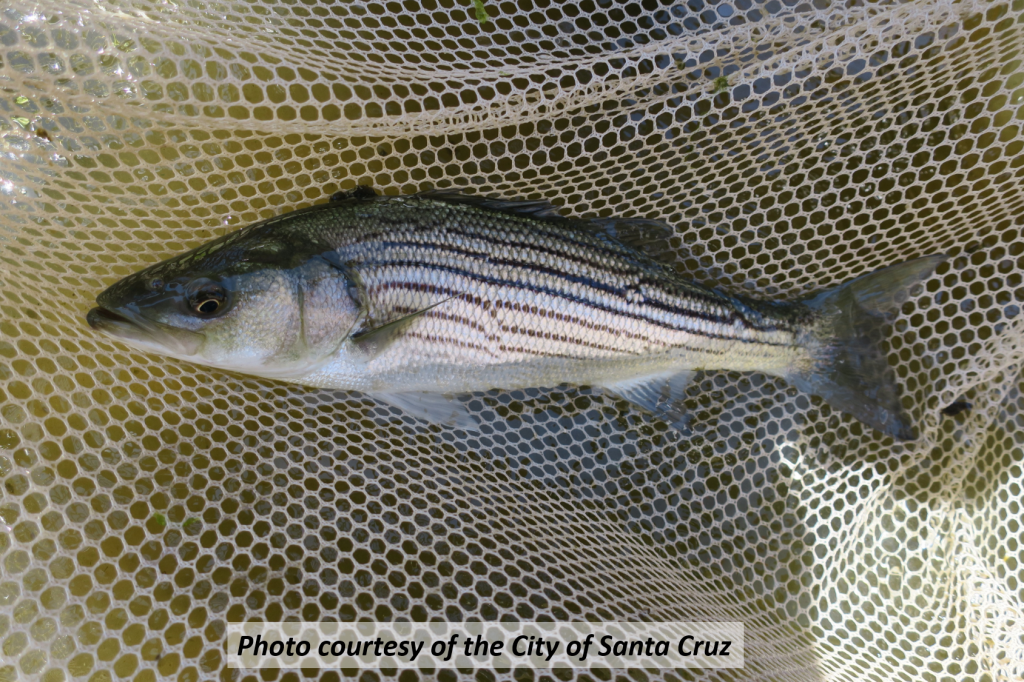 You can be a part of ongoing research! This month, scientists at NOAA Fisheries South-West Fisheries Science Center and Trout Unlimited are going to catch striped bass on the Salinas and Pajaro Rivers, attach external tags onto their backs and release them back into the river. If you are fishing in rivers, lagoons, or off the beach…you may catch one of these tagged fish! If you do catch a tagged fish, call the phone number listed on the tag to call the scientists to tell them where you caught the fish, which will provide information on how far they travel. Stay tuned for more updates on this program and, fishermen, keep your eyes out for tagged striped bass! 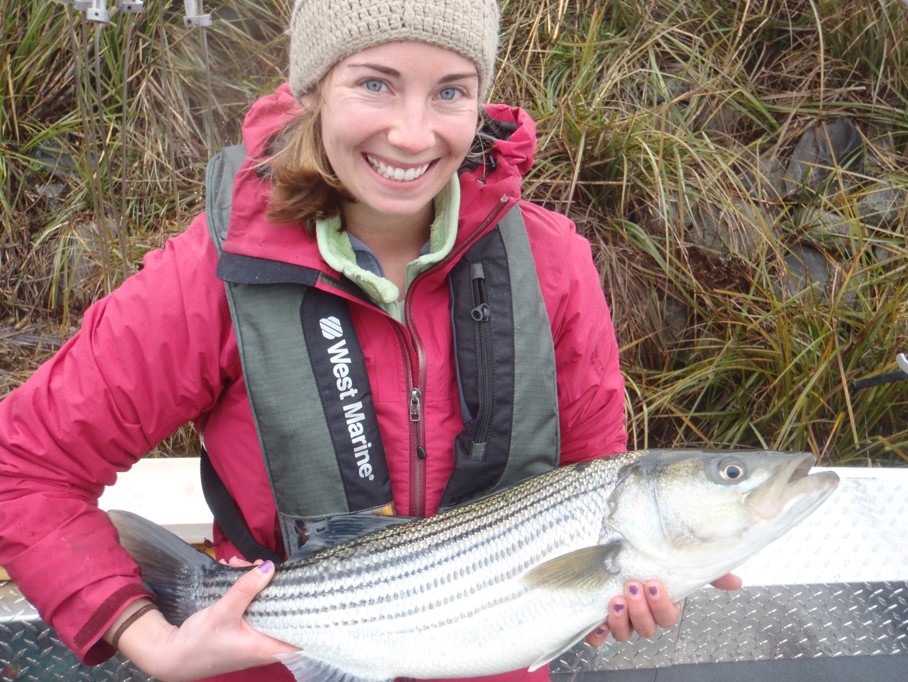