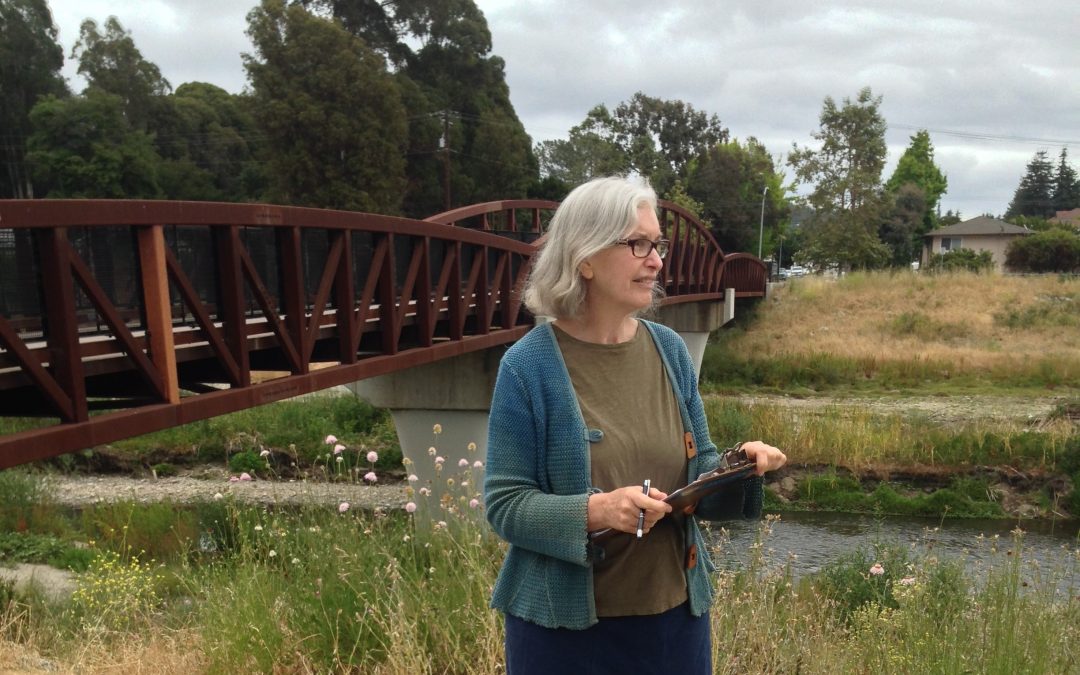 Since 2014, the Coastal Watershed Council’s Riverwalk Usage Study tracks who is using the Santa Cruz Riverwalk and what type of activities park users are engaging in. Rachel McKay, who has been volunteering for the Riverwalk Usage Study for a year, shared her reflections on her experience as a volunteer. Here is what she wrote:

I count people using the San Lorenzo River Walk as part of an ongoing survey for the Coastal Watershed Council. I have done this once a month, at noon, for a half an hour, for the past year. I started counting at the Trestle Bridge by the Boardwalk on a late spring weekend. People poured over the trestle, on bikes or walking, some with strollers, picnics, and dogs. Later on I did a day at the Duck Pond in San Lorenzo Park where some people hang out on the bench-lands below the walkway; others walk into town to shop; families use the playground; and office workers take walks on their lunch breaks.

Now, I’ve moved up river to the walkway near Highway 1, and I count on a weekday. It is farther from the heart of town, and at first I turned down this spot, worried about who might be there. I am used to walking alone and as I’ve gotten older, I worry a bit more. But tired of the crowds at the Boardwalk, I ventured north and am glad that I did. Some homeless folks hang out there, but most ignore me, others are civil, and some just talk to themselves. I have never been bothered. Another reason I like this spot is that it feels like being in the country. Today I saw a congress of crows bothering a red-tailed hawk; the hawk swooped and soared dancing with the crows.

After a rainy winter, my last two visits have been busy with people enjoying the river walk. Some were heading to the Gateway Plaza shopping center where I park when I don’t ride my bike. There were more dog walkers than usual today. A woman rode a bike followed by her young son on his bike. A man drifted past on what appeared to be an electric skateboard. Then as I left, I saw my favorite sight, a woman riding her bike in a lovely orange dress. It was breezy, the sun was warm, cooling when clouds hid it, the billowy clouds of April, and the San Lorenzo flowed briskly. A perfect day for the river.