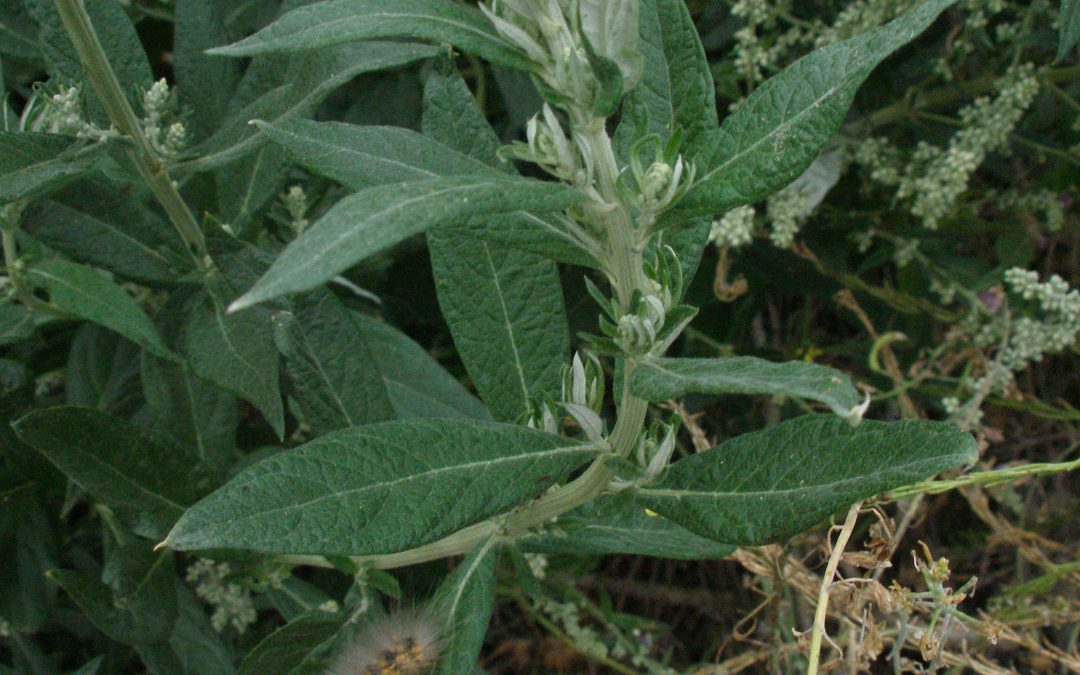 Every second Saturday of the month, CWC leads River Health Days where volunteers help plant and care for a variety of native plant species to increase biodiversity and habitat complexity and support a healthy river ecosystem. Mugwort (Artemisia douglasiana) is one beneficial plant you may spot growing along the river.

Mugwort is a perennial herb in the sunflower family. It can grow up to four feet tall and four feet wide. It is known for its aromatics just like its siblings sagebrush, and wormwood. It thrives in wet riparian habitats. In optimum conditions it will spread quickly through rhizomes. It is a great plant for erosion control because of its thick rhizomes and healthy root system. In the springtime, it has tiny white creamy flowers and in the winter it goes dormant.

Mugwort is used by Native Americans in California for medicinal and ceremonial purposes. Many Californian tribes burned mugwort leaves for its medicinal purposes including promoting healthy sleep, invoking sacred dreams, and warding off wicked spirits. They also inhaled the smoke to treat ailments including the flu, a cold, and a fever. The Chumash tribe chewed mugwort to treat dental problems including tooth pain, and gum pain. One of the most interesting uses of Mugwort is its use of it as an insect repellent. Not only does it repel insects but the plant has also been used as a sedative for nervousness and insomnia. California tribes used Mugwort for many holistic and ceremonial purposes and still use it today although it is currently not recommended to take internally.

Not much is known about the interactions between insects and mugwort but it is said that native bees use the plant as nesting material. It is also said that this plant attracts predatory insects which will decrease the number of pest insects. It’s known that this plant is a host for butterflies and moths including the American Lady, cosmopterix opulenta, and platyptilia williamsii.

Coastal Watershed Council has recently installed 45 California mugwort (Artemesia Douglasiana) plants thanks to volunteers at our January River Health Day event and volunteers at the Second Harvest Food Bank. If you would like to see a beautiful mural incorporating mugwort, CWC can also help with that. In the Summer of 2021, we with the help of Irene Juarez O’Connell created storm drain murals to create that bridge from the drain to the ecosystem it affects. The ecosystem which mugwort is a cornerstone of.

You can make a difference in the San Lorenzo ecosystem by caring for mugwort and other native plants that enhance the ecological value of San Lorenzo River habitat. Join other volunteers at monthly River Health Days to plant more native species like mugwort. Sign up below!