Are there plague minnows in the San Lorenzo River? 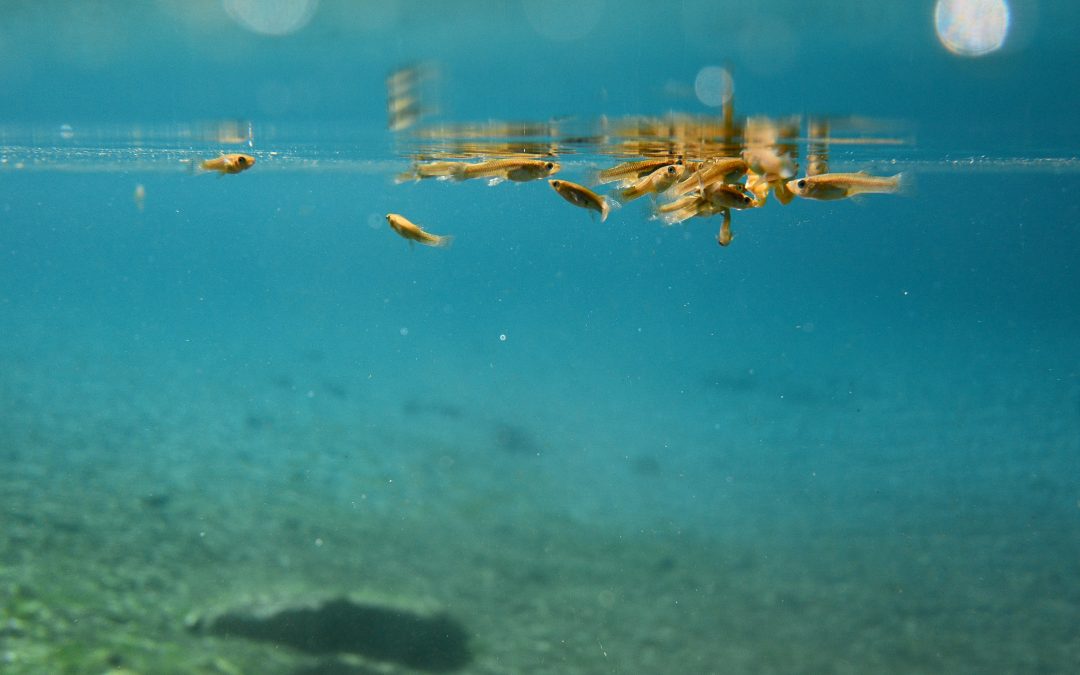 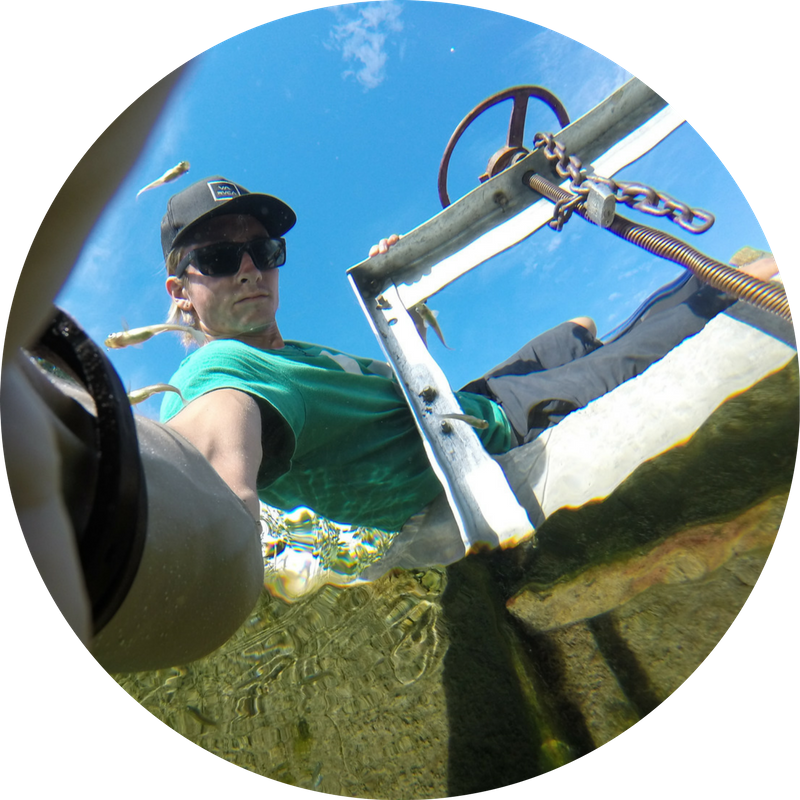 Gambusia affinis is one of the most widely introduced species across the globe. When they are destructive in their non-native ecosystems, they’re deemed an invasive species, yet in other contexts they may cause little to no harm. Read on to find out whether or not these non-native fish are found in the San Lorenzo River watershed and what that means for the ecosystem.

One of the most widespread non-natives in the world (Fig 1) and one of the world’s “100 worst invasive species” (Lowe et al. 2000) lives in the San Lorenzo River watershed. This species – Gambusia affinis (pictured above) – has been given various common names depending on its perceived ecological impacts. You may know this species as the “mosquitofish.” In places where this species’ ecological impacts are known to be devastating, it has differently and ominously been referred to as the “plague minnow.” 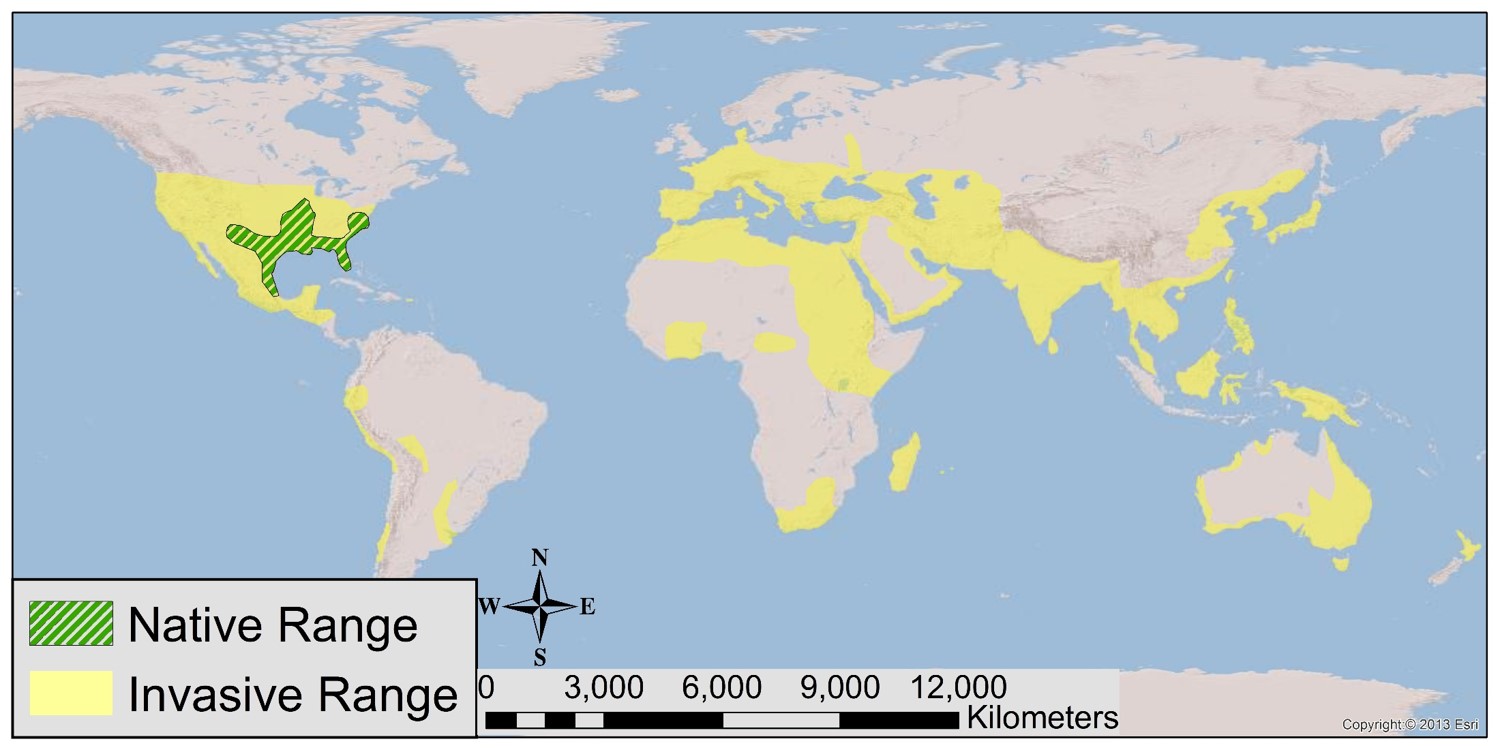 The name “mosquitofish” arose for this species in the early 1900’s. At this time, it had just been discovered that mosquitoes were vectors for malaria and yellow fever and so people then began their “crusade” against mosquitoes. The first popular methods to destroy mosquitoes were draining or “oiling” (adding petroleum products to water) water basins to kill juvenile mosquitoes, which live in water. These methods caused significant collateral damage to wild and domesticated animals, so people sought more ecologically-friendly methods. Moreover, some mosquito species live in shallow water with dense vegetation, so draining and oiling were not entirely effective.

The authors of the first books on mosquito control suggested that introducing small fishes could be an ecologically-safe alternative to draining and oiling, with the added benefit that fishes could penetrate dense vegetation to eat mosquitoes. Importantly, these authors lived on the east coast of the USA where Gambusia affinis was prevalent, so they suggested its use in particular (Howard 1901, Smith 1904). Long story short, many people read these books, which led to the global introduction of Gambusia affinis and its exaggerated reputation for destroying mosquitoes. Today in Santa Cruz County and across California this species is still used for mosquito control.

Gambusia affinis is by no means a specialist feeder on juvenile mosquitoes; the species has a diverse diet, from plankton to snails to amphibian eggs and everything in between (Pyke 2005, Lee et al. 2018). Where introduced outside of its native range, Gambusia affinis may thus harm native and commonly imperiled groups of species like amphibians and therefore has been given the nickname “the plague minnow.” Indeed, an extensive scientific literature documents this fish’s negative impacts on a global scale (Pyke 2008).

So, is Gambusia affinis invasive in the San Lorenzo River watershed? In other words, is our Gambusia affinis the dreaded “plague minnow?” That’s a question that should be addressed using the scientific process. If I were to address this question, I’d seek to answer two sub-questions.

If we do not consider Gambusia affinis invasive in the San Lorenzo River watershed today, we should still anticipate changes to that status that may come about in the future. The global climate is changing in ways that might favor the spread of the species locally. In particular, global warming is increasing air and water temperatures, undoubtedly making the San Lorenzo River watershed more amenable to Gambusia affinis. Thus, Santa Cruz residents using this species to control mosquitoes on their private property should be increasingly careful to prevent the possible escape of this fish into natural waterways. Special caution should obviously be taken for waterways with temporary or permanent outlets to the San Lorenzo River, which indeed has critical habitat for imperiled species.

In closing, although Gambusia affinis is considered one of the world’s 100 worst invasive species, in the context of the San Lorenzo River watershed TODAY, the species does not appear to be highly invasive. However, as San Lorenzo water temperatures warm in the face of global temperature rise, we must be increasingly careful to prevent this fish’s escape into natural ecosystems to be sure it does not become invasive here in the future.

Disclaimer: The views presented herein are the author’s hypotheses. These hypotheses should bear no influence on policies until they are tested through the rigor of the formal scientific process.