Lighting the Way (and the Riverwalk)! 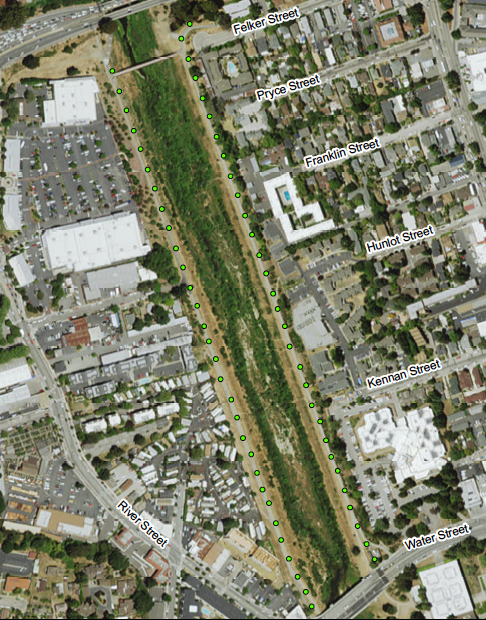 The Santa Cruz City Council recently approved the final step for installing more lights at the Santa Cruz Riverwalk and a contract for the work is to be awarded by the end of the year. The goal in lighting the Riverwalk is a safer evening and nighttime path for neighbors and others traveling this alternative transportation route in the dark.

CWC’s ongoing work with river neighbors identified improved Riverwalk safety as a high priority, so we support this investment in the park. But how do we bring more light to this linear park, to improve actual and perceived safety, while honoring that the fish, birds and wildlife in and around the river actually need the dark each night? It took a compromise, like so many other aspects of managing this urban stretch of the river.

The background is that the City earned a grant to illuminate a dark stretch of the Santa Cruz Riverwalk, both sides of the river from Water Street to the Highway 1 pedestrian bridge. Without these state grant funds, the lightning might not happen for years, if ever.

Recent research has demonstrated, however, that nighttime lighting causes harm to certain fish species, including threatened and endangered species found in the San Lorenzo River. Fish sometimes move at night, when dark conditions make it less likely for their predators to find them. Artificial light can throw off that natural rhythm and cause these fish more stress. It’s important to note that there isn’t a single cause that’s been identified for the decline of many species, but a combination of stressors. Why add another challenge to their already difficult chances of survival and thriving?

Unnecessary levels of artificial light do more than cause problems for already stressed fish. According to the International Dark-Sky Association, excessive lighting also wastes money and electricity and isn’t good for people either. The organization has an active Santa Cruz chapter, which advocated for changes to this latest round of lighting the Riverwalk. City staff were receptive to some of the chapter’s recommendations, while also balancing installation and maintenance costs, durability and the project goals of a more lighted path. CWC thanks the dedicated members of the Santa Cruz Chapter and supports their broader efforts to establish local lighting ordinances that minimize excessive lighting.

This tradeoff is a common theme for river management, particularly in an urban stretch of the river such as in Santa Cruz proper. It may most wise to get out of the way and let nature do its thing. Do rivers really need humans to manage them? Maybe someday we’ll do away with the levees and try a new approach. Until then, what we’ve signed up requires balancing habitat improvements with reducing flood risk and factoring in public safety and other human needs. CWC is here to advocate for that balance as part of our effort to realize Santa Cruz’s vision of a healthy, welcoming and fun San Lorenzo River that connects our diverse community to nature and that’s recognized as an attractive and desirable location for outdoor recreation and reflection.