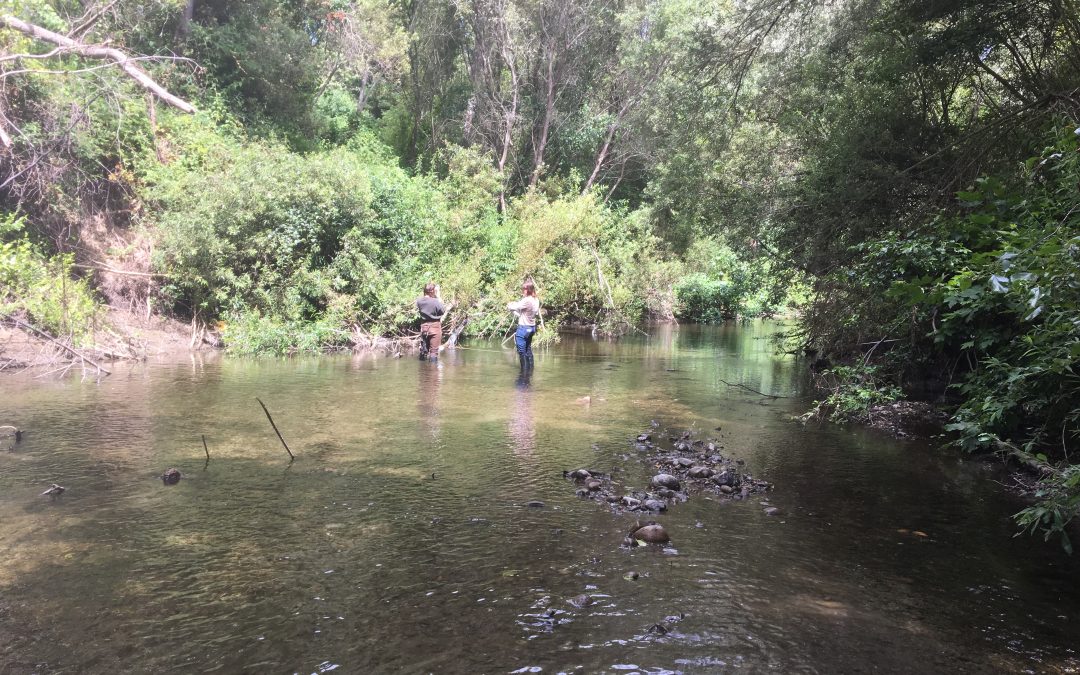 I would love to learn the language of streams. I’ve explored so many creeks and wondered what the water has seen. How many generations of salmon, mayflies, or ducklings has it supported? How hot or cold do it’s waters get? Where did that puffy orange cloud floating just below the surface come from and was it caused by the human communities that have sprung up around this stream? As someone who depends on water, how do my actions impact the life of a stream? If I could understand it, hear the stream’s story, I think I would better understand my role in its life. I would know why the rocks are covered in green algae, where the surface scum came from and more so, what I can do about it. When I know what the river needs, I can support the stream’s ability to support life.

As a summer Science & Monitoring Intern at the Coastal Watershed Council (CWC) I have the opportunity to learn and teach the language of the stream. CWC leads a water quality-monitoring program called Urban Watch in the City of Capitola that welcomes people of all ages to learn about two local streams: Noble Gulch and Soquel Creek.

Soquel Creek is a 16-mile stream that runs from the Santa Cruz Mountains and Nisene Marks to the Capitola Village and into the Monterey Bay. It was once a popular salmon and steelhead run and has in the past been impacted by low water flow and urban runoff from the communities that live within the watershed. Noble Gulch is a small highly urbanized tributary to Soquel Creek. 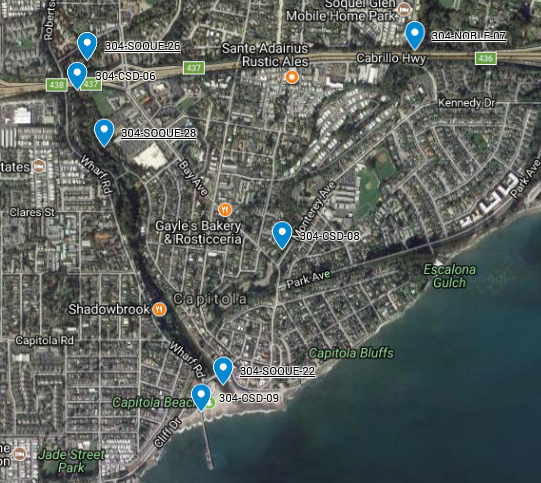 During Urban Watch volunteers monitor the health of these streams and measure the impact of the urban environment on water quality.  Specifically, we collect samples and take measurements from the surface waters and from storm drain pipes to examine what is being washed downstream from homes and businesses, streets and gutters and into aquatic ecosystems.

It was my first day in the field. When we arrived at Soquel Creek I noticed shimmering reflections of alders and willows glistened on the low riffles of the creek as it meandered past a concrete storm drain towards the ocean.  I pulled on my waders (waist high rain boots that allow us to walk into the river and stay completely dry!) and climbed down to the stream. I dipped the water quality monitoring probe in the water. The computer in my hand began to flash numbers next to names of different water properties: stream temperature, conductivity, total dissolved solids (TDS), salinity, dissolved oxygen (DO), pH, and turbidity. The numbers began to stabilize and like a translator, the probe began to decode the state of the stream, its health and what it needs to sustain life. Here is how we can learn from streams:

Measure the temperature to understand the viability of aquatic species (let’s not boil or freeze our fish in our river!). Steelhead, for example, are poikilotherms, which means that the temperature of the water determines their body temperature and their ability to metabolize. Temperature can determine growth rates, reproductive rates, and feeding rates. Water temperature also affects the chemical properties of water by increasing electrical conductivity or decreasing dissolved oxygen levels which fish need to breath.

Measure total dissolved solids (TDS) to quantify the salts, minerals, metals, and anything else that is dissolved or suspended in water. Excessive salts or mineral content can hurt fertilization and hatching rates of salmon and steelhead, and the survival rate of invertebrates. Measuring TDS gives us an easy way to see how much “other stuff” like bacteria, nutrients, and metals, are washing into the water from storm drains.

Measure the salinity to determine how much natural or human-caused salt there is. High salinity lowers dissolved oxygen levels and increases conductivity. It can lower reproductive rates for freshwater fish, and hinder plant growth. Plants are important because they provide oxygen to the stream ecosystem and hold the riverbanks in place so that they don’t wash downstream! With the increase in forest clearing, industrialization, and chemical-dependent land practices, salinity levels are rising and we can use salinity data to identify areas most threatened. 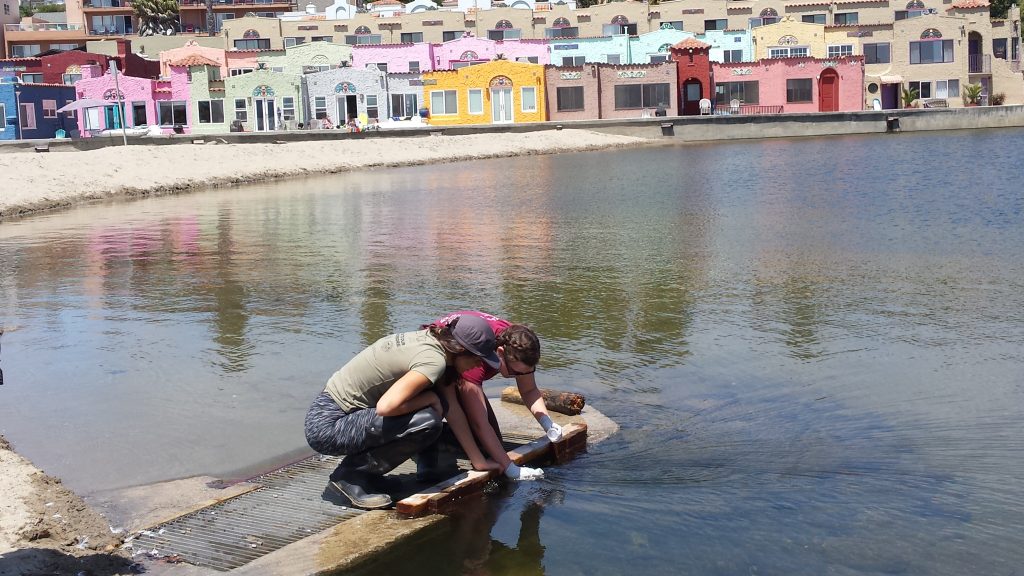 Gauge the river’s ability to sustain life by measuring the dissolved oxygen (DO). DO is oxygen absorbed by water that aquatic organisms depend on to breathe and that decomposers require to decompose organic matter. In a healthy system, plants convert carbon dioxide and water into sugars and oxygen. Some of that oxygen is released into the water and available to aquatic species. When excess nutrients, coming from human runoff, enter the watershed, algae feed off these nutrients and explode in population. When that algae dies, the decomposition of algae consumes oxygen that would be available to fish, leaving fish to suffocate under water. The DO tells us whether riparian species are able to survive here.

Monitor acidity of the river by measuring pH.  The pH is naturally balanced by photosynthesis and respiration that raise the pH, and precipitation that reduces it. pH can vary however further based on the inflow of dumped chemicals, such as shampoo or car wash soap. Measuring acidity is important because acidic waters determine the solubility of nutrients and metals in water and how much is available for biotic consumption, thus making harmless chemicals in the water lethal to aquatic life in acidic waters.

Learn how much light can enter the stream by assessing turbidity or water clarity. Water clarify it effected by the suspension of particles, such as clay, silt and algae in the water. Measuring turbidity is measuring how much light can penetrate through the stream water, impacting temperature and supporting plant and algal growth. High turbidity can make water too warm for riparian organisms to live in and hinder riparian photosynthetic activity. High turbidity occurs when there is erosion or high surface flow contributing sediment to the stream. When the water is moving fast enough that the flow can carry particles but when flow slows down the particles settle at the bottom of the stream.

I called out the numbers corresponding to each parameter to a volunteer taking notes on the stream bank. I paused to notice the water striders gliding on the surface nearby. I was excited: I had a new way to understand the stream. Now that I knew the ways to communicate, I wanted to ask the stream so many questions:

Next week I will return to the stream armed with curiousity and the tools to answer all my questions. Stay tuned for my next round of field notes and learn how Soquel Creek and Noble Gulch measure up in salinity, conductivity, turbidity and more. You can also join us in our study of stream health by volunteering! 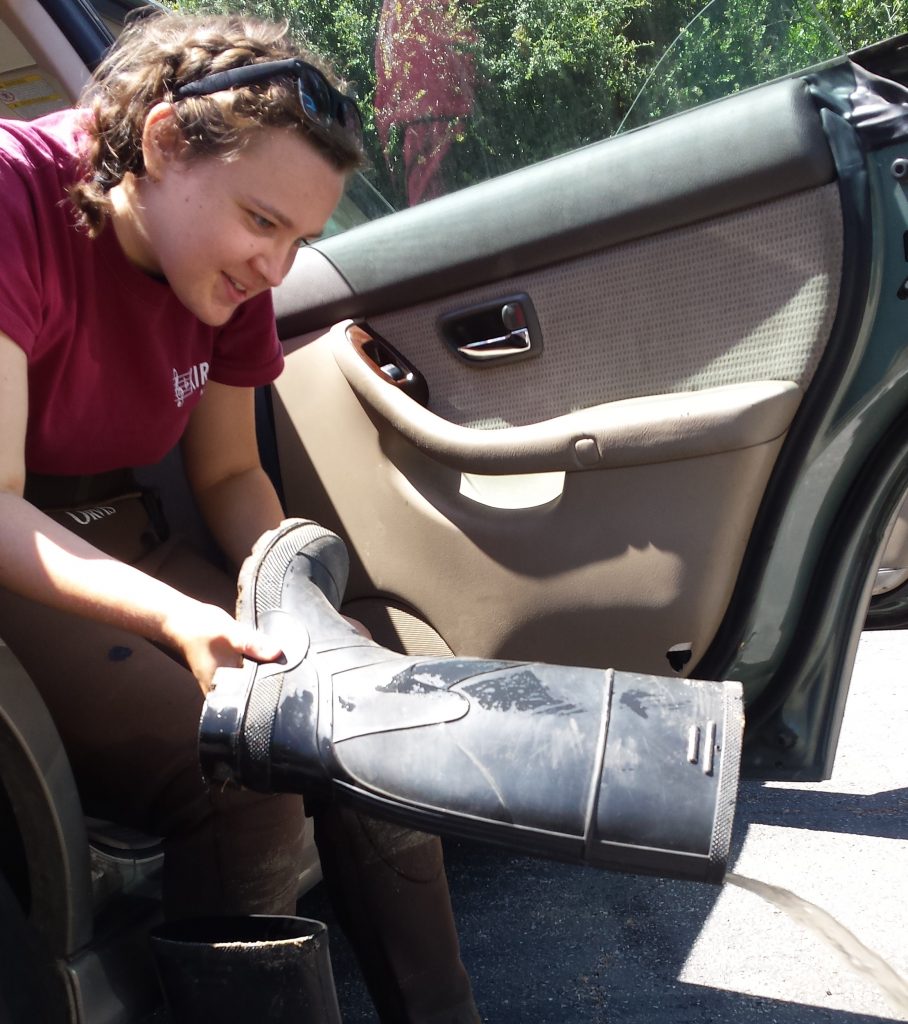