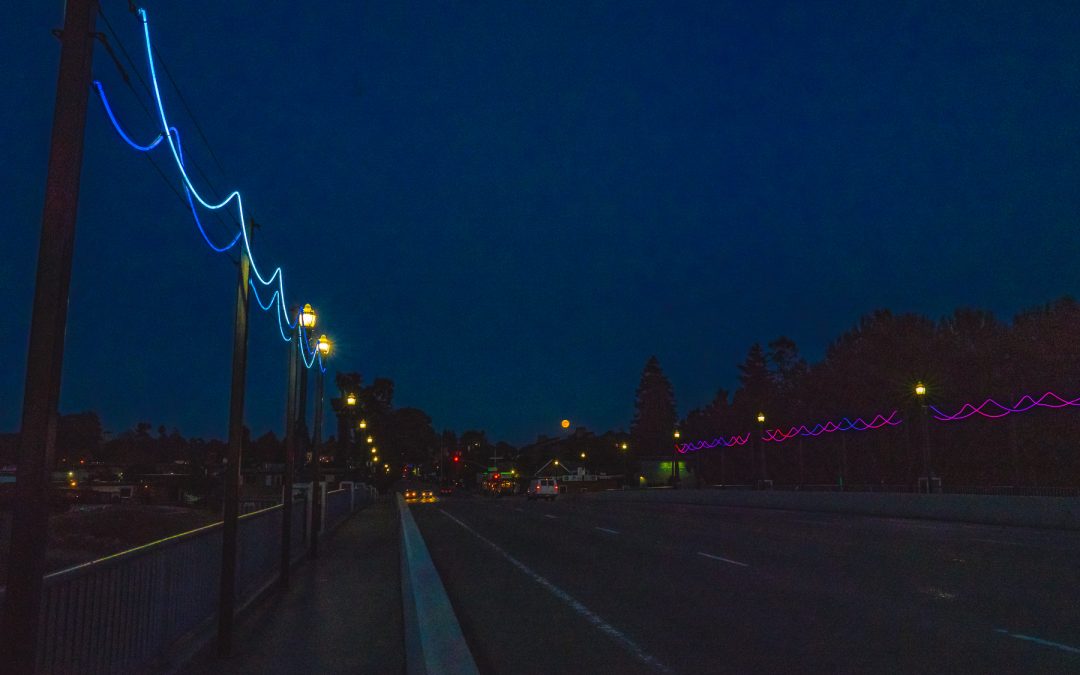 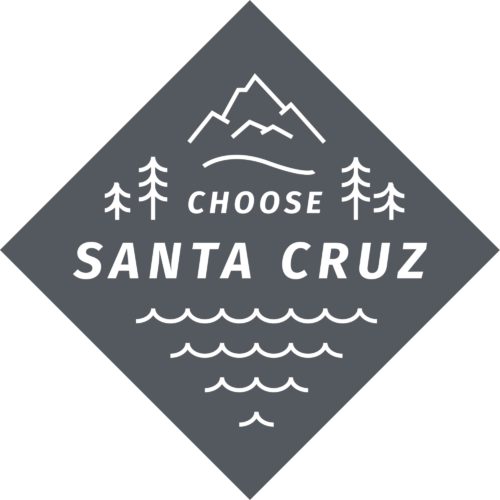 If you’ve taken an evening stroll along the downtown Santa Cruz Riverwalk this fall, or gotten an after-dark glimpse of the Soquel Bridge, you’ve probably admired a colorful, undulating LED light installation spanning the river. The neon wires bump and dip like ocean swell over the bridge, and when night falls, their color tones morph almost organically—transforming from hues of blue, to pink, and purple.

The art installation—designed by the Santa Cruz-based creative design firm Visual Endeavors—is called “River Motion.” Which is a fitting name, as the reflection of the expansive art piece reflects almost perfectly in the waters of the San Lorenzo River below. From the adjacent levee pathways, the prismatic lights have a lustrous and dazzling quality over the slow, rippling river, and illuminate a part of downtown Santa Cruz that craves more attention.

We want people who drive by to wonder why the lights change. Maybe they were faster one week, or the colors have changed to purple, and then hopefully that will make them curious to explore more.

And while the need for more illumination, more art, and more community presence is a simple fact of the downtown’s San Lorenzo riverbanks, the art installation “River Motion” accomplishes something else entirely that is much more subtle—almost brainy—but of great importance for Santa Cruz.

Despite the fact that it runs right through the center of downtown, it’s all too easy to neglect the San Lorenzo River and all of its merits—it’s a critical habitat, a municipal water resource, and a full-scale natural ecosystems conjoining the mountains and the sea. What many may not know, the lights of “River Motion” are a morphing, algorithmic beacon that actually indicate the health of our river. That might sound a little bit trippy, so let’s explain.

To begin, you have to understand who Visual Endeavors’ Aron Altmark and Rachel Stoll are.

A couple as well as creative business partners, Altmark and Stoll have carved out a unique space in the world of live entertainment arts, large-scale light installations, programming, coding, virtual reality, and how the technical merger of those things have the potential to culminate into something awe-inspiring.

“We can take all these things and really mash them together and massage them to create something that people haven’t seen before,” says Altmark, who founded the company in 2016.

The back-end programming for “River Motion” sources a variety of data on the San Lorenzo from the United States Geological Survey (USGS) and the local Coastal Watershed Council. And with those figures encoded into the LED’s sequencing and color outputs, the installation conveys visual information about the river’s salinity, flow rate, and oxygen levels.

Unveiled this past June in conjunction with the Ebb & Flow River Arts Festival, “River Motion” has been illuminating the river after dark for almost half a year. But with Daylight Savings Time ending soon—Sunday, Nov. 4—the lights over the Soquel Bridge will likely garner some fresh attention as the night greets us earlier – as the video below shows.

Santa Cruz has garnered attention as an artists’ hub for decades, boasting institutions such as The Tannery Arts Center, a robust First Friday artists program, and countless individual creators who collectively form the fabric of Santa Cruz. However, Santa Cruz is also a changing landscape, as new, technical industries find their footing and new economies ripple their way outward. So what form does that take in the Santa Cruz arts scene?

Altmark says. “There’s this iconic history of the arts here, which is appealing, but it’s also interesting because there’s a lot changing here, too. So, how does all that fit together?”

For Visual Endeavors, their mediums, in a sense, straddle that evolution—the intersection of old guard artistic representation, and the new technology available to leverage its potential.

Altmark originally hails from Alabama, and his artistic roots are in theatre and live stage performance. His career later evolved into larger scale events—Wrestlemania and Coachella, for examples—which imbued in him the desire to creatively captivate people emotionally, but on very large scales.

“We’ve seen an interesting growth in how people experience live entertainment, so what we’ve been trying to figure out is how to take all this technology that’s continually growing and all these ways that people are experiencing shows and these gallery installations and drill them down to what still gets the emotional reaction.”

As the technological muse for Visual Endeavors, Stoll thinks of one aspect of their job as artists as being able to open people’s minds to new views of what constitutes art.

“I always want to inspire people to think of things in different ways,” she says. “We’re very design-focused, but ultimately, you can only realize designs and ideas with the technology behind it…I think art has a lot of room to grow, especially as we have new technologies coming at us every single day, and I think people are going to look at art differently in 10 years than they do now.”

Stoll and Altmark say that moving to Santa Cruz was decided on partly because of the city’s geographic position in California, close to major airports—Altmark travels internationally regularly—and Silicon Valley, but also because of its uniqueness.

It’s really a long-form narrative and the river itself is, in its own way, a long-form narrative—it changes, generally very slowly, as water flows in and out, and this is a way to be more connected with those changes. The river is a really important resource for Santa Cruz, so this is an interesting way to make its value more accessible…The goal of this piece is to inspire curiosity, and to really get people to connect in a deeper way with the San Lorenzo River.

“It’s an easy flight to any major metropolis, but when you come over (Highway) 17, Santa Cruz has its own magical vibe—it’s a lot different than any place over the hill, and that’s really special,” he says.

The pair was also attracted to Santa Cruz for the beautiful mountain trails practically on their doorstep. Altmark grew up watching mountain biking videos from Santa Cruz, so when they began to consider the area for a new life chapter, his mind way already mostly made up.

“We both trail run and mountain bike, and love taking our dog out to the beaches, so for us it’s a place that’s easy to find inspiration. We spend our time in the redwoods, up in the mountains, on the water, getting quality downtime and inspiration for what we do.”

Stoll and Altmark work to create art that inspires awe for their spectators, because just like the recharge they get from exploring Santa Cruz’s natural beauty, reactions to their work is also a fuel that keeps them going.

“Coming from the theatre and dance world where we’re always aiming for this catharsis, this emotional release…that’a what I still strive for now—for people to come and experience this visceral reaction that takes them to a different place…You can feel this palpable moment of awe, and that’s what I strive for. I want to feel that reaction, I definitely thrive on that feeling.”

The City and the Arts Commission endeavor to install vibrant art projects that do not harm wildlife or the environment. Per policy, public art projects are reviewed for any possible negative impacts on wildlife and the environment. The Soquel Bridge Light Installation was reviewed by City staff and the California Department of Fish and Wildlife for potential impacts on birds and other wildlife and it was determined that the light levels would not cause detrimental effects to fish, birds or other wildlife.