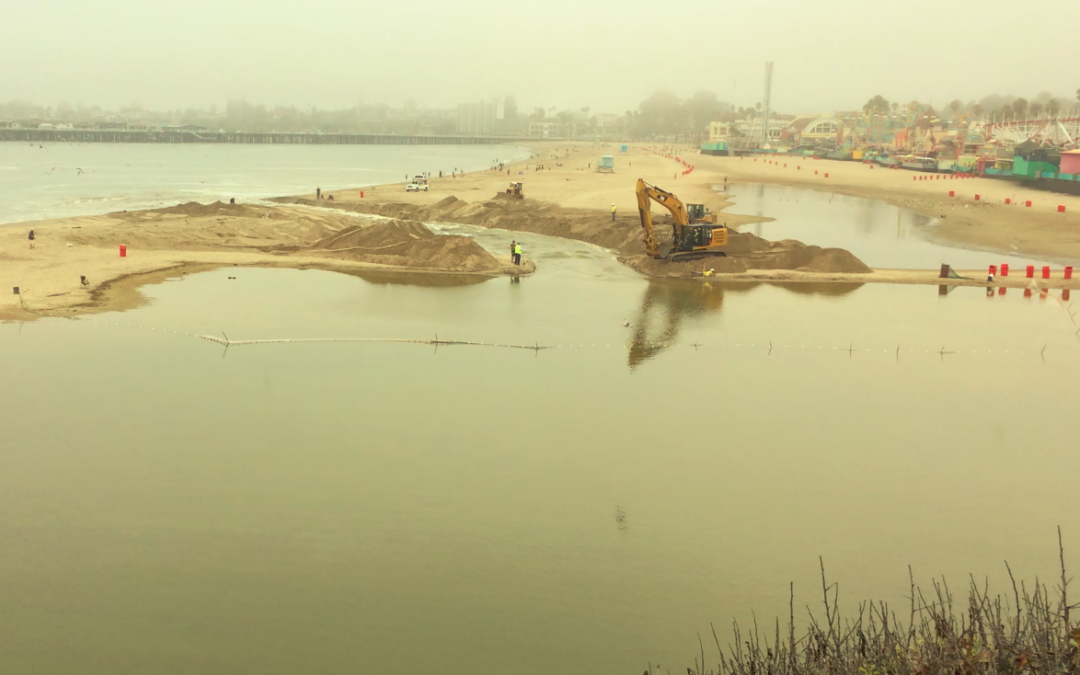 Like many coastal rivers in California, the San Lorenzo River forms a lagoon in most dry seasons that opens and closes based on ocean swells, tide conditions and river flow. Fish such as steelhead trout and Coho salmon (when they’re around) use the brackish lagoon as a critical transition zone going to and from fresh and saltwater. When conditions are favorable, these anadromous fish enjoy the safety of deeper water in the lagoon that helps them grow into healthier young adults. The lagoon can breach naturally, posing a dangerous condition for beachgoers, even turning deadly at times, such as in a recent drowning.

A closed lagoon can also lead to localized flooding in businesses and homes near the river, along with stagnant, warmer river water that can even lead to algal blooms. Scott Ruble of the City of Santa Cruz Public Works Department recently agreed to a written question and answer session to shed more light on a unique project designed to manage the lagoon differently. The City has been working with state and federal regulators in recent years to manually breach the lagoon, a costly effort that provides only temporary relief. The following questions were posed by CWC and the quoted answers are from Scott Ruble.

Let’s start off with just a brief description: what’s this project called and what’s it all about?

“The San Lorenzo River Lagoon Culvert Project is the name. It’s a multi-objective project that has been in conceptualization and development with the environmental regulatory agencies for almost eight years.”

What is the project, in a nutshell?

“Well, in an over-simplification, it’s a pipe that will transport flood stage waters from the San Lorenzo River lagoon to the ocean when the lagoon reaches a certain water level height in the summertime.” 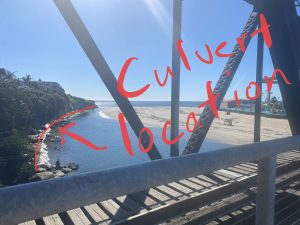 What are the goals of the project?

Ok, let’s start with the flooding.

“In the summertime, rivers along the coastline frequently close off in a natural process called shoaling caused by decreased flow in the river and increased sand deposition during south swell. When this happens to the San Lorenzo, the water level in the lower river – the San Lorenzo River “lagoon,” which is generally the river stretch between the ocean and south of the Highway 1 bridge – begins to rise.  That rising level, once it begins to exceed a certain level, begins to flood the surrounding areas of lower Ocean Avenue and Beach Flats neighborhoods as most of that area is a historic flood plain. When the river gets high enough it even begins to flood basements in the downtown area.  It’s a problem not only for those homes and businesses, but it also degrades our infrastructure. The large sinkhole that opened up in the Mike Fox Park parking lot this summer, for example, was caused by the flooding.”

Ok. How about the habitat protection and the public safety pieces?

“The habitat protection was what really drove the need for the project. The lagoon is home to many animals – but of most concern to the environmental regulatory agencies are the steelhead trout which is listed as Threatened under the Endangered Species Act and a little fish called the tidewater goby found only in California which is listed as Endangered. For many years, the lagoon would be breached by individuals in order to relieve the flooding. However, unless done under specific circumstances considering water levels, swell, tides and methods of breaching, the breaches were typically “catastrophic” breaches – meaning, all the water is quickly and violently expelled from the lagoon in a matter of hours. This can literally flush out and strand the fish, but also damages the lagoon habitat in that it goes fully saltwater when the lagoon fills in on the next high tide. So a number of years ago the regulatory agencies who have jurisdiction over the lagoon made clear that the City was going to need to deal with this problem and develop, in partnership with them, a more permanent solution to these catastrophic breaches. And those agencies include California Department of Fish and Wildlife (CDFW), NOAA National Marine Fisheries (NMFS), US Fish & Wildlife, the Coastal Commission, the California Water Board and the Army Corps of Engineers.  We’ve been working with these agencies for about six years now on this project to achieve the goals of eliminating the flooding as well as the catastrophic breaches.

Oh, and the public safety is related just to the catastrophic breaches. They’re extremely dangerous and incredibly difficult for the lifeguards to provide protection for. Oftentimes these breaches are not during the hours when lifeguards on the beach in order to help mitigate that risk to life safety.”

So how does the project accomplish those objectives?

“In short, the culvert will keep the lagoon’s water surface level from rising above 5’ NGVD 29. NGVD 29 is a sea level datum and is the standard by which lagoon water height is measured. Over years of observations it was agreed that at 5’ we see any appreciable flooding of the surrounding areas, but from the regulatory agencies point of view, it still provides an excellent lagoon in terms of habitat and the controlled outlet will reduce the potential for catastrophic breaches that are  dangerous for the public and impactful to the lagoon biota. Once the lagoon reaches 5’ in height, the culvert will begin to transport excess water from the lagoon to the ocean. The culvert will preferentially pull saltwater from the lagoon in order to maximize habitat value for rearing steelhead and other fish. It should be noted this excess lagoon water cannot practicably be re-used by the Water Department for water supply.

“Well, during the majority of the summer months, the beach going public really won’t see the culvert except at the outfall. If you can picture the cliff at San Lorenzo Point overlook, where the river typically flows into the ocean – at the bottom of that cliff there is a natural “bench” feature, where the cliff becomes horizontal. In that bench feature at the base of the cliff there is an old 2’ deep trench from where a sewer pipe used to be many decades ago. That trench is where the 2’ wide pipe will be – so in most spots you won’t actually see the pipe. And, actually, during the majority of the summer when the lagoon water level is at 5’, you won’t see the pipe at all as it will be under the water. You’d only see the outfall about 20’ off the end of San Lorenzo point.  Very similar to Capitola Beach – where you have that pipe that controls the level of the lagoon there – a pipe under the sand transports water from the lagoon to an outfall near the ocean’s edge. That culvert serves the same purpose – to provide a controlled lagoon for habitat, and allow for excess water to drain off to the ocean.”

When will this project happen?

“The culvert will be installed sometime in the spring/summer of next year. The amount of rain we get this winter could determine the exact construction window.”

Will fish swim through this pipe, the culvert? 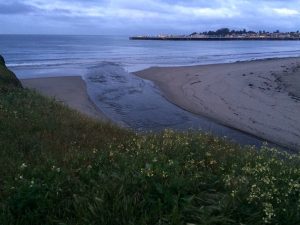 Do you have to take out the pipe during the winter during high river flows?

“Thankfully, no. Because the culvert is built into the existing trench at the base of the cliff, it is resilient enough to remain in place year-round – no installation and removal construction each year like Capitola has to do with theirs, for example.”

Who’s doing the actual work, and who’s paying for it?

“The work will be done by the awarded marine contractor under City and regulatory agency oversight. The cost of the project was 77% funded by a grant from the Wildlife Conservation Board – a preservation, protection and restoration arm of the California Department of Fish & Wildlife. The remaining 23% was paid from City funds primarily the Stormwater Fund and the Liability Fund.

Currently the lagoon is illegally breached by individuals from time to time. Will people still be able to do that after this project is complete?

It will be more difficult. The controlled water level in the lagoon will allow the natural sand berm between the ocean and the lagoon to grow taller and wider, making illegal breaching a more difficult proposition. Illegal breaches, I should add, come with a hefty fine from a Fish & Game warden.

Anything else to add that the public might find interesting or surprising about the culvert project?

This really will be a cutting edge project in terms of how it will protect that lagoon habitat and the City and the regulatory agencies are excited about the model it could be for lagoon systems up and down the state that face similar problems. For example, the sub-surface intake in the lagoon is designed specifically to remove the water from the bottom of the lagoon which is where the higher salinity water settles. Preferentially removing this higher salinity lens improves habitat by reducing lagoon temperature and increasing dissolved oxygen.

Many thanks to Scott for sharing these answers. If you’re interested in more project information, see the City’s project site.