City Hall to YOU 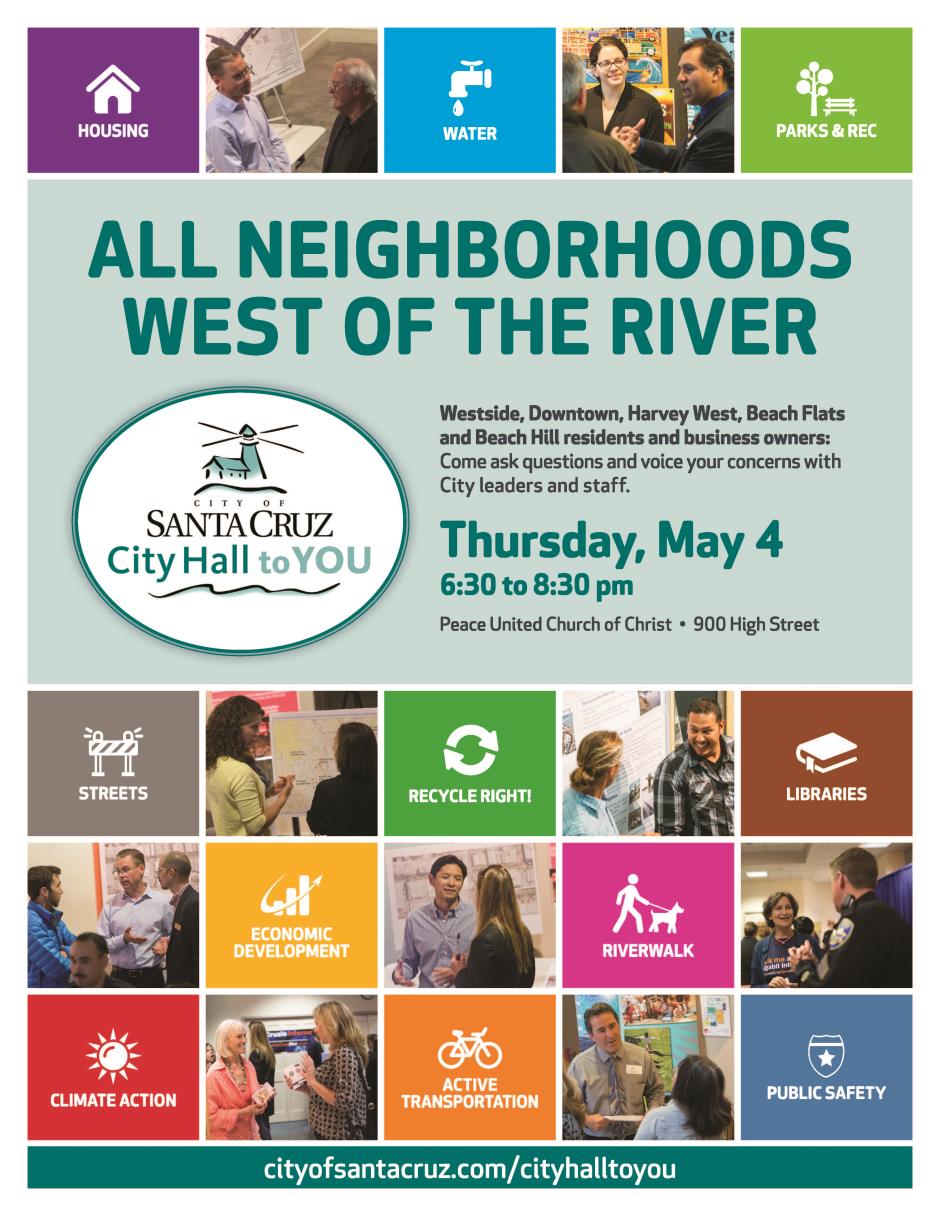 The City of Santa Cruz wants to hear the concerns and questions of residents and business owners from all neighborhoods west of the San Lorenzo River at City Hall to YOU on Thursday, May 4. The event welcomes individuals from the Westside, Downtown, Beach Hill, Beach Flats and Harvey West areas to speak directly with City leaders and staff at 19 open house tables and town-hall program. The forum’s venue is Peace United Church of Christ, 900 High Street, from 6:30 to 8:30 p.m.

This “West of the River” event will address the local housing crisis in response to public input received throughout the City Hall to YOU series last year. The City invites the community to share their housing thoughts through an interactive mural and informal voluntary surveys. Mayor Cynthia Chase will lead the evening’s town-hall program with details of the City’s upcoming housing outreach initiative. Vice Chancellor for University Relations Keith Brant will be available at the UC Santa Cruz table to discuss the proposal for approximately 3,000 new beds on the west campus.

City Manager Martín Bernal will be the only other town-hall speaker leaving 45 minutes for residents to ask questions. He will provide information on the City’s new strategic focus areas.

Questions about the proposed Wharf Master Plan, vacation rentals and corridor rezoning will be answered by staff overseeing these efforts. Engineers, elected officials and managers across all City divisions from parking services to climate action will be available for one-on-one dialogue.

Police Chief Kevin Vogel and both deputy police chiefs will be present to discuss Police Department community engagement, crime data and police services. Their three tables will include a video question and answer booth where dialogue will be captured to share with the greater community through social media.

There will be dozens of displays of City projects and programs relevant to neighborhoods west of the river including streets slated for Measure H paving, the Pacific Avenue Contraflow Bike Lane and  upcoming Safe Routes to School Crossing Improvement locations. There will also be a sneak peek of the City’s forthcoming Bike Share program.