A recent article in the Santa Cruz Sentinel highlighted the passing of the baton – or should we say trash picker – from the Leveelies, who have been diligent cleaners and defenders of the Levee for nearly a decade, to the Downtown Streets Team. Leveelies founder Janet Fardette was highlighted for her significant contributions to this work. The article states, 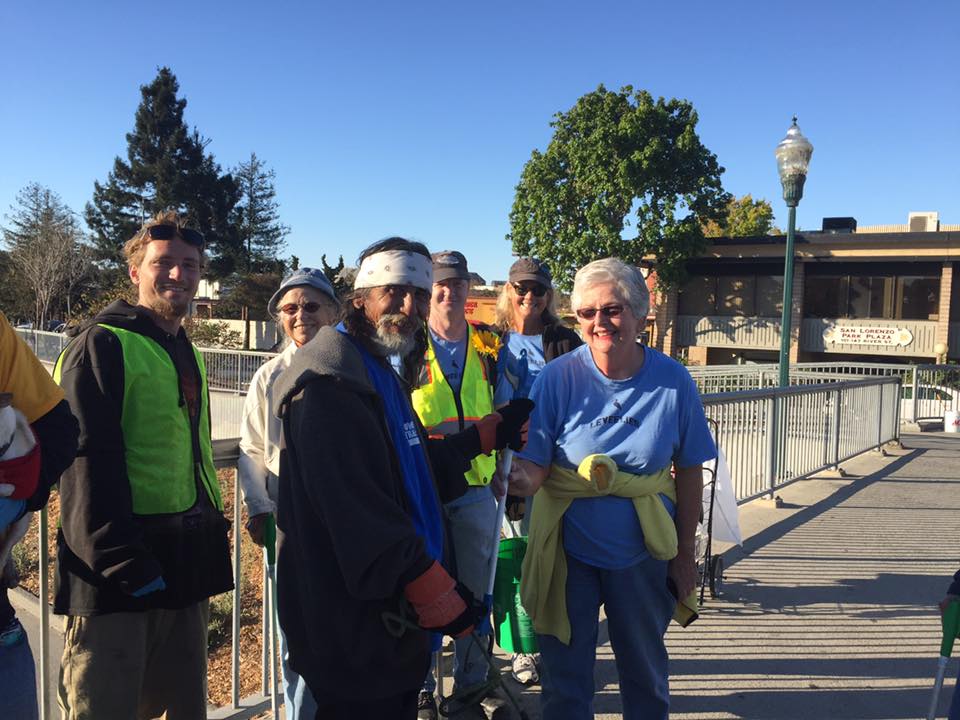 Since the Downtown Streets Team started cleaning the Santa Cruz Riverwalk, the park that lines the lower San Lorenzo River, in September 2017, we have heard from countless people that “the park has never looked better.” Indeed, since September 19th – our first day on the Riverwalk– we have removed an average of 27 50-gallon trash bags of debris per week (about 6 cubic yards) along with 25 needles each week. Special training with the Santa Cruz Public Works Department to safely remove and dispose of needles and coordinated trash pickups by Santa Cruz Parks and Recreation maintenance workers have allowed our Team Members to become extremely effective and efficient as they remove trash and other debris. Big kudos to the City of Santa Cruz for its partnership on this project!

But it’s not just our Team Members who are cleaning up the Riverwalk and San Lorenzo Park. The Team has reported that many of their peers in the homeless community at large are getting into the act as well. Every day they’re approached by other homeless men and women who dispose of their personal trash in our bins or ask for an empty bag so that they can clean up after themselves. This positive change in behavior is remarkable.

The praise that our Team Members receive – the simple “Thank You” that they get every day they’re out there – is so important. It’s such a simple way for all community members to support our project and goals here. Each day, I hear from Team Members about the business owner, city staffer, or visitor to downtown who stop to say “thank you!” At the very least this puts a smile on the face of someone who might not have had much to smile about, but it also gives them the confidence that they have their community’s support and compassion as they work their way out of homelessness.

Although we are a homeless services organization first, we are proud of the positive environmental impact that our model has in each community we serve. We look forward to working with the Coastal Watershed Council on the collective effort to create a space along the lower San Lorenzo River that is stewarded by Santa Cruzans from all walks of life.

If you would like to contribute to our cleanup efforts along the lower San Lorenzo River, one of our biggest ongoing costs is that of supplies, and we could always use additional funds to make sure our Team Members are well prepared for their daily routine. Costs include bags or gloves ($10), brooms and dustpans ($20), trash grabbers and buckets ($30) and push carts and garbage cans ($75). Give today at www.streetsteam.org/donate and choose to apply your donation to the Santa Cruz Team.