Abating Flooding along an Urban River 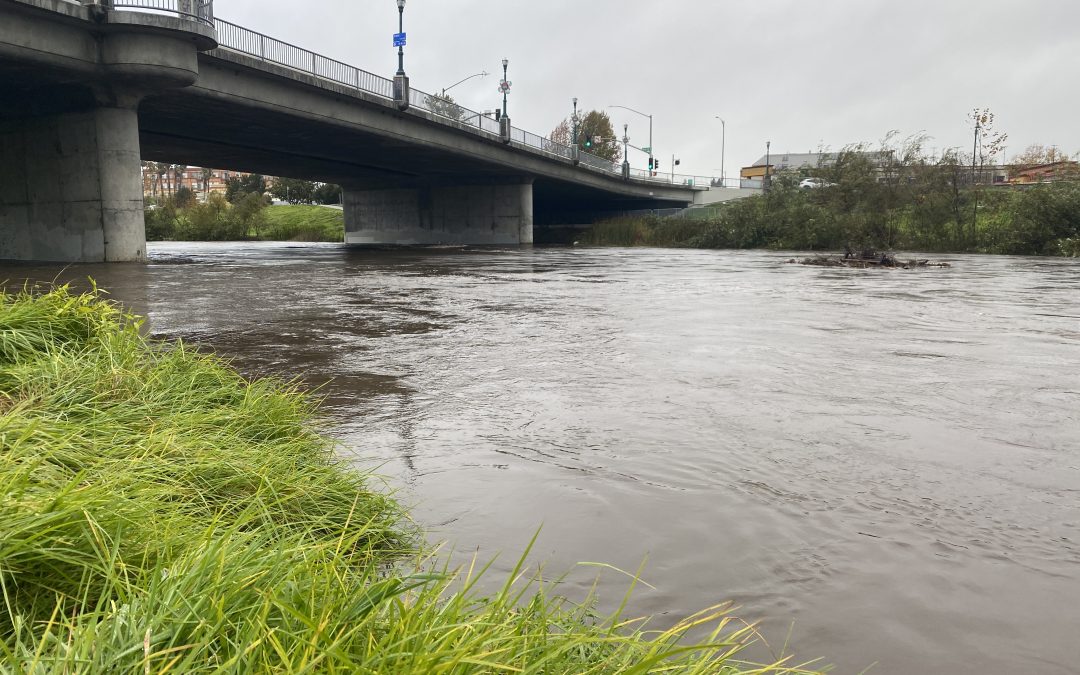 Managing an urban river requires a delicate balance to protect people and the surrounding environment. Each year, the City of Santa Cruz conducts its annual required San Lorenzo River Maintenance Project in order to help stormwater safely travel through downtown Santa Cruz without flooding the communities living along the lower river. This involves cutting vegetation within the leveed channel that has grown too large and could impede flow, among other actions. The work is overseen by a biologist to minimize the impact on important habitat.

For millennia before the founding of Santa Cruz, the river would overflow its banks into the floodplain during winter storms. But when development began to encroach on the floodplain, people began to try and manage these stormwaters. As written in the San Lorenzo Urban River Plan:

The first serious flood to hit the growing town was in the winter of 1862. This flood caused extensive damage and eroded the base of Mission Hill 30 feet. The response to this flood by the townspeople was the earliest form of flood control: they built a bulkhead to stabilize the riverbank near the base of Mission Hill and they began to change the river channel so that it would run past Mission Hill instead of straight at it (McMahon, 1997). At the same time the bulkhead was built, property owners along the western edge of the river began to fill their lots to raise the grade by as much as four feet to prevent the river from flooding their properties. The City of Santa Cruz established its first San Lorenzo River Commission in the late 1870s to address the flooding impacts of the river.

Flooding continued with events recorded in 1878, 1881, 1890, 1895, 1907, 1911, 1940, and 1941. The costliest, deadliest and most well-known flood in the history of Santa Cruz was on December 22, 1955. The river flowed down Pacific Avenue at a depth of three to four feet and caused multi-millions of dollars in damage and eight deaths. Following the 1955 flood, the lower 2.5 miles of the San Lorenzo River was channelized into a flood control structure in 1957-59 in a cooperative project of the City of Santa Cruz and the U.S. Army Corps of Engineers (Corps).

The flood of 1955 was devastating. Among that which was lost, was Santa Cruz’s final Chinatown which once stood where the Chinatown Bridge monument now stands along the lower river in downtown Santa Cruz.

Before the flood, in September of 1955, Santa Cruz had been considering a “non-intrusive plan” for levee construction along the San Lorenzo River to regulate flow. Following the Christmas Flood of 1955, the Army Corps of Engineers took action swiftly and the project was made even larger. The riverbank vegetation was replaced with rock levees. The levee construction greatly altered the natural flow of the river. When it was completed in 1959, the public criticized the levee for turning the river into a drainage ditch. Santa Cruz residents have advocated for more natural riverbank conditions ever since. The Coastal Watershed Council leads this effort today through our River Health Day program, which focuses on improving habitat and biodiversity within the flood control structure. 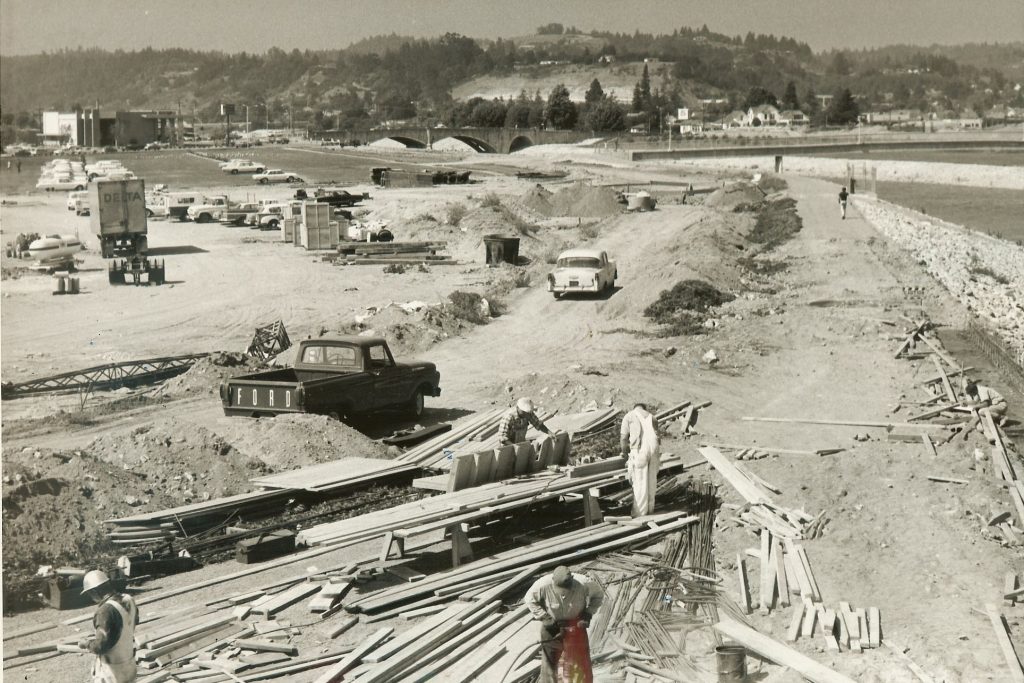 Levee construction officially ended in 1959. There was a lot of controversy on whether the levees were necessary and people still debate over the correct innovations for flood control today. Photo courtesy of and © City of Santa Cruz Economic Development Department.

In more recent memory, the flood of 1982 was devastating for the city of Santa Cruz and remains in the memories of many local residents. The flood began on January 4th when the river flooded over its banks and flowed towards the County Building. The next morning, a crack appeared in the Soquel Avenue Bridge. Soon after, the eastbound lanes collapsed taking with them telephone lines that connected the east and west sides of the river. During the flooding, 22 people died, the majority in the mountains when the heavy rainfall caused mudslides. 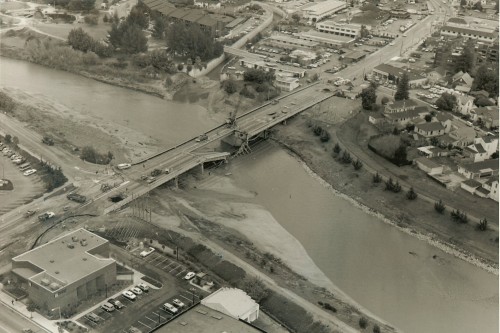 During the peak flow of the 1982 storm surge, the Soquel Avenue Bridge was damaged. The above photo was taken a day after the water subsided. Photo courtesy of and © City of Santa Cruz Economic Development Department.

The last time the San Lorenzo River experienced significant flooding was in early 2017, as described by the Santa Cruz Sentinel here. While we don’t know what the winter ahead has in store, we can expect flooding again in the future. Both by looking to the past significant flooding events and by looking to the future using predictive climate models, we know it is only a matter of time before the river’s waters will rise again.

Read on for more information about the history of flooding along the San Lorenzo River and how you can prepare for future flooding events.

Learn More About Flooding along the San Lorenzo River 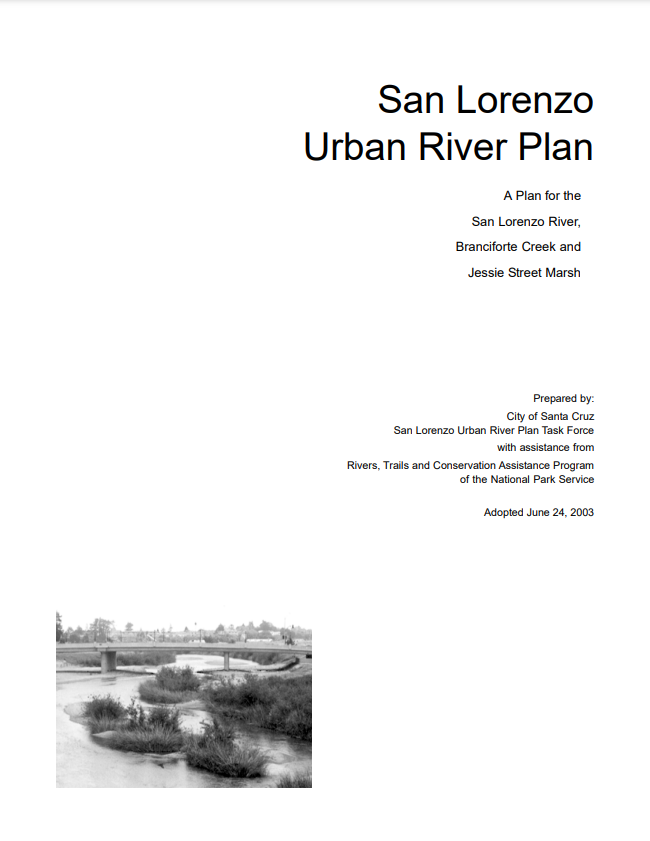 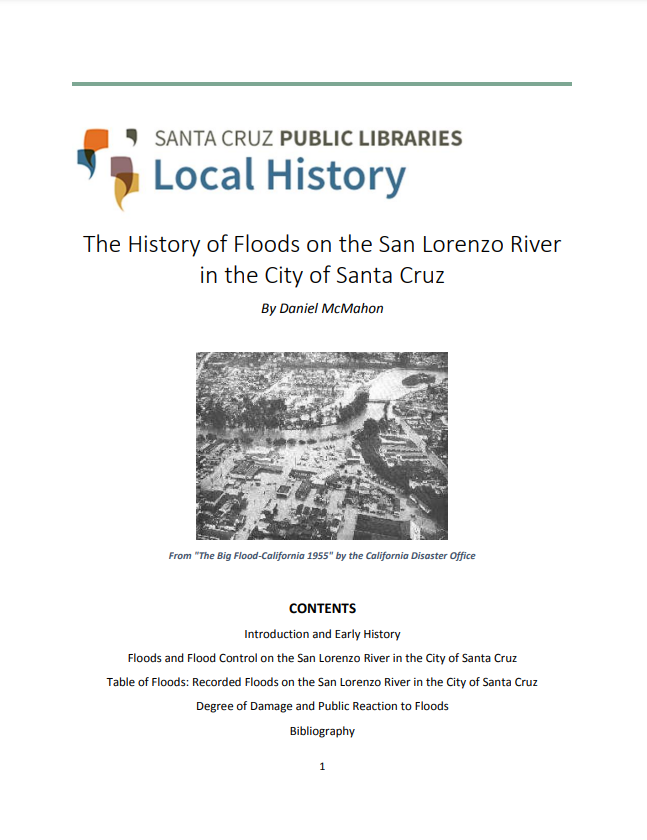