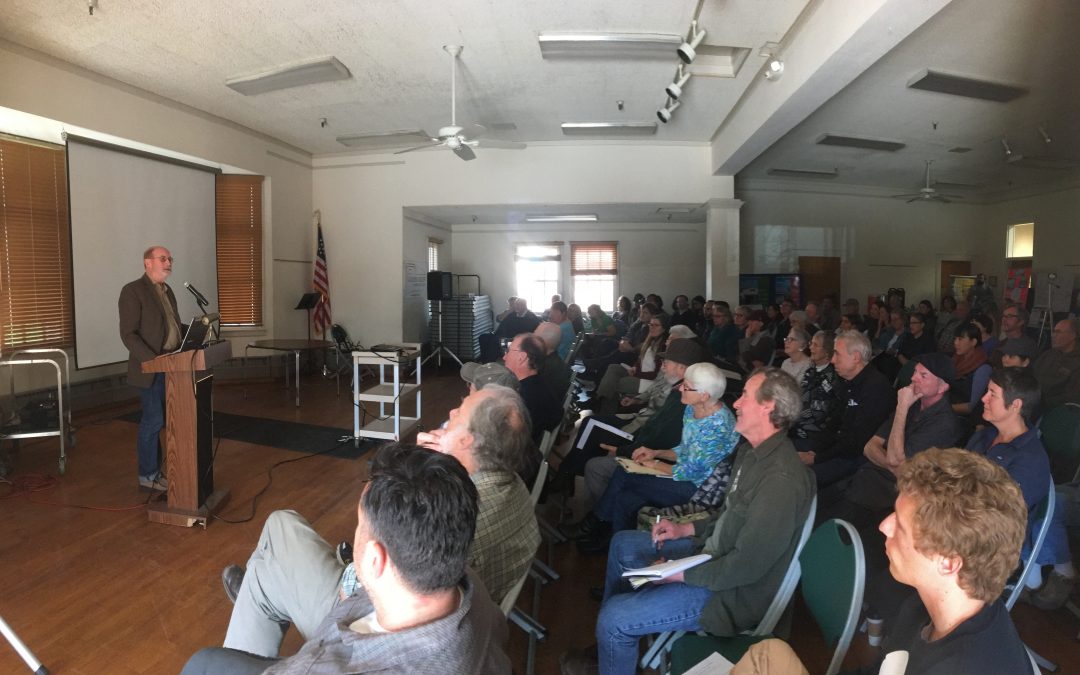 Kicking off with an overview from City of Santa Cruz Watershed Compliance Manager Chris Berry, attendees took an ecological, geological, historical and cultural look into the San Lorenzo River watershed. The diversity of land use and historical uses of the watershed stood out, putting today’s efforts to revitalize the river into 150 years of context. Learn more about the City of Santa Cruz Water Department’s Watershed Section.

Next up was one of the best known names in San Lorenzo River watershed management, John Ricker, Water Resources Division Director, County of Santa Cruz Health Services Agency, who has been working in the watershed for decades. John focused on hydrology, specifically how groundwater is being managed to improve flows in the San Lorenzo River.

Did you know that 40 to 50% of dry season flow of the San Lorenzo River comes from the Santa Margarita Basin? We’ve seen that recent groundwater declines of up to 250 ft. have reduced flow by 0.2 to 0.5 cubic feet per second and approximate flow reductions of 10 to 20% in lower Bean Creek. John emphasized that it is critical that we continue to manage groundwater, particularly in the face of climate change as natural recharge rates to replenish the groundwater may be reduced by up to 30% by 2100. Scotts Valley Water District, San Lorenzo Valley Water District, the County of Santa Cruz and the City of Santa Cruz are working on the creation of a sustainability plan and a joint agency required under a new state law. Learn more about Santa Margarita Groundwater management at smgwa.org.

Geologist Jeffrey Nolan continued the conversation about how aquifers contribute to surface water flow, specifically the karst aquifers of Ben Lomond Mountain. Different from granular aquifers like the Santa Margarita, karst formations are characterized by underground drainage systems with large cavities, sinkholes and caves. It’s like a system of pipes. Water flows through these openings very quickly, with very little of the filtration that usually benefits groundwater. Because of that, they can be subject to contamination. In contrast, the Santa Margarita that John Ricker focused on is a granular aquifer, which has much smaller openings between the tightly packed individual grains. Because of that, groundwater recharges a granular aquifer much more slowly and is well filtered as it moves along.

The symposium continued into the afternoon with Kristen Kittleson, Fishery Resource Planner, County of Santa Cruz, who presented on the fish of the San Lorenzo River, particularly the anadromous fish Steelhead and Coho Salmon. Anadromous fish are fish that are born in freshwater, migrate to the ocean and back to freshwater streams. Steelhead found in the San Lorenzo River spawn multiple times in their lifetimes and therefore make the journey from fresh to salt water multiple times. Flow is crucial for this journey, as anadromous fish will face both natural and human made barriers that require enough flow to pass.

Natural features like bedrock cascades or riffles may block the passage of migrating fish. To examine whether or not a barrier is passable, fisheries biologists examine the depth across the feature, the jump height, launch or jump pool depth and the jump complexity. The velocity across the feature that determines how easy it is to swim past it is also factored into the rating of a barrier. Human structures, such as legacy flashboard dams for recreation, also create barriers for fish passage. While in normal flows they may seem insignificant, during low flows even small barriers become a challenging obstacle, particularly for juvenile fish migrating downstream.

Later in the afternoon fisheries Biologist Don Alley continued the conversation of fish and flow, looking at correlations between fish, flow and habitat improvements in the San Lorenzo River system.

John Laird, California Secretary of Natural Resources, in the midst of statewide travel and flights to Washington, D.C. comes home to Santa Cruz and the San Lorenzo River watershed as many weekends as he can. Recently, John has been busy working on the Oroville Dam crisis. He spoke of the importance of balancing human and ecological uses of water in California and the challenges that come with moving from the driest five years on California’s record to what might just be the wettest year on record.

Another challenge that the state is addressing is the potential weakening of federal protections for the environment. When it comes to the protection of endangered species, California does have our own endangered species act, but we lack the appropriate funding, staff and measures to monitor the entire state if the federal government steps back. Secretary Laird and his team are examining how the state can respond to potential major policy and funding shifts proposed by the federal government.

Secretary Laird emphasized the importance of local leadership. He emphasized that whether you’re working in the San Lorenzo River watershed, at the state level or nationwide, what’s most important is leadership, to make sure that action continues and does not get derailed in changing political climates. He also shared how important it is that the public knows what’s going on. That’s one of the goals of events like this 3rd annual State of the San Lorenzo River Symposium.

Following Secretary Laird, Chris Coburn from the Resource Conservation District discussed all the ways in which his special district inspires leadership with private landowners taking ownership over improving their natural resources. The work of the RCD is a win-win for homeowners and for the watershed. Learn more at rcdsantacruz.org. 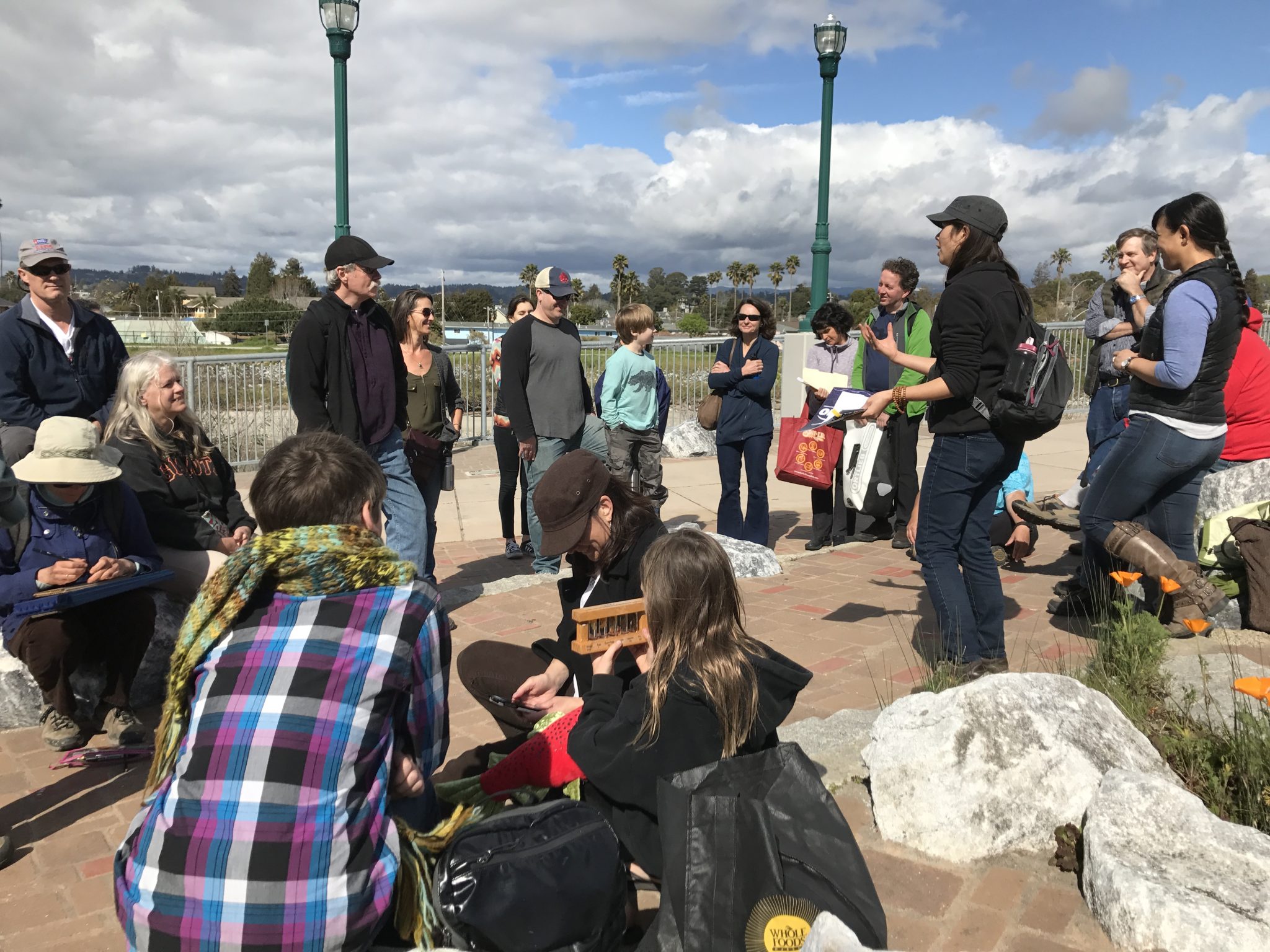 ‘Rapping’ Up a Day of Learning

CWC’s rap ‘Incidental Flows’ put a musical tune to the stewardship actions you can take in your own backyard. The Coastal Watershed Council demonstrated how you too can be a leader in watershed management, right at home by reducing incidental flows. Incidental flows occur in dry weather months when water runs off from homes and yards into storm drains. During dry weather, incidental flow can feed bacterial growth in biofilm in the storm sewer system. These bacteria are then flushed into the San Lorenzo River and the ocean during high flows.

As the crowds dissipated from Louden Nelson, some continued the day of learning out by the river with the “Flow and the Life of a Fish” tour led by Erin Loury and Shaara Ainsley of FishBio. This tour was the third installment of the Exploring the San Lorenzo River Series and followed the lifecycle of a steelhead trout in the San Lorenzo River from eggs in creeks of the upper watershed to smolts in the lagoon to leaving the watershed for adulthood in the ocean. Tour attendees engaged in interactive games and group discussion to explore habitat, adaptations and barriers that can determine survival of anadromous fish.

Thank you to John Laird for sharing this keynote, all of the expert presenters at the Symposium and all of the organizations that work every day and show leadership and action for our watershed. Thank you to all partner organizations who worked together to host this 3rd Annual Symposium. Organizing partners include the Coastal Watershed Council, City of Santa Cruz Water Department, the County of Santa Cruz, the Resource Conservation District and the San Lorenzo Valley Water District. Tabling organizations included the organizing partners above as well as the Santa Cruz Museum of Natural History and the CA Dept. of Fish & Wildlife. Stay tuned for more events where you can learn more and get involved at www.sanlorenzoriver.org.