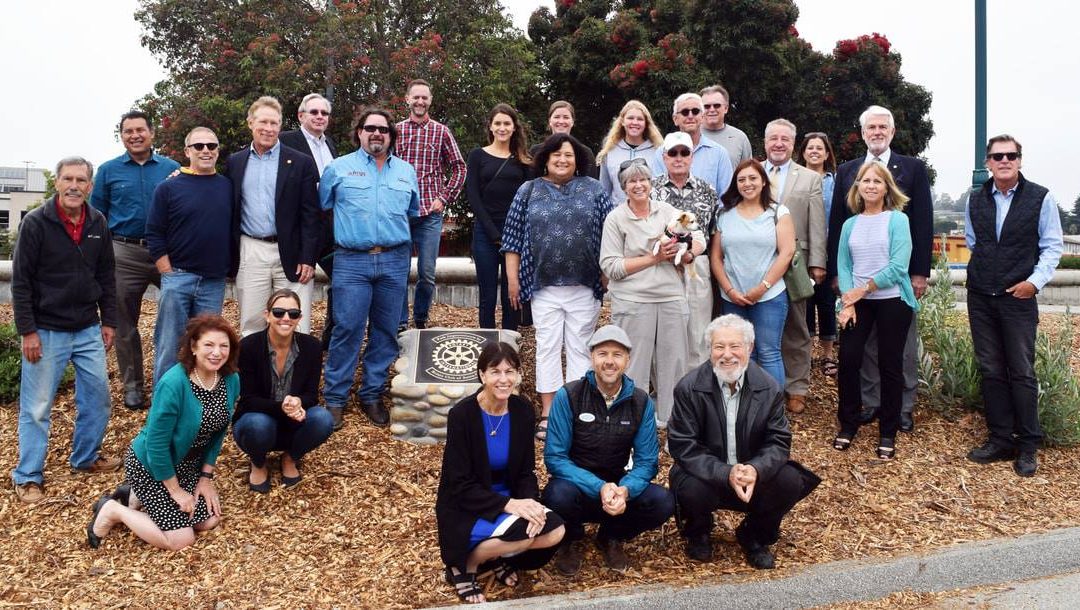 The Santa Cruz Riverwalk is the City’s longest park, extending 2 miles on either side of the San Lorenzo River from Highway 1 to the river mouth. The Riverwalk connects our community to the dynamic San Lorenzo River ecosystem and provides a quiet respite to observe colorful and diverse wildlife in downtown Santa Cruz. Recently, community groups have been investing time, money and energy in ecological landscaping of green spaces along the Riverwalk through the Adopt A Parklet program.

The Rotary Club of Santa Cruz was one of the pioneering groups to participate in the Adopt A Parklet program. In spring 2016, the Rotary Club began working with staff from CWC and local landscaping firm, Ecological Concerns Inc, to design their parklet. The new design drew from a palette of native plants in order to bolster habitat and improve aesthetics of the park. 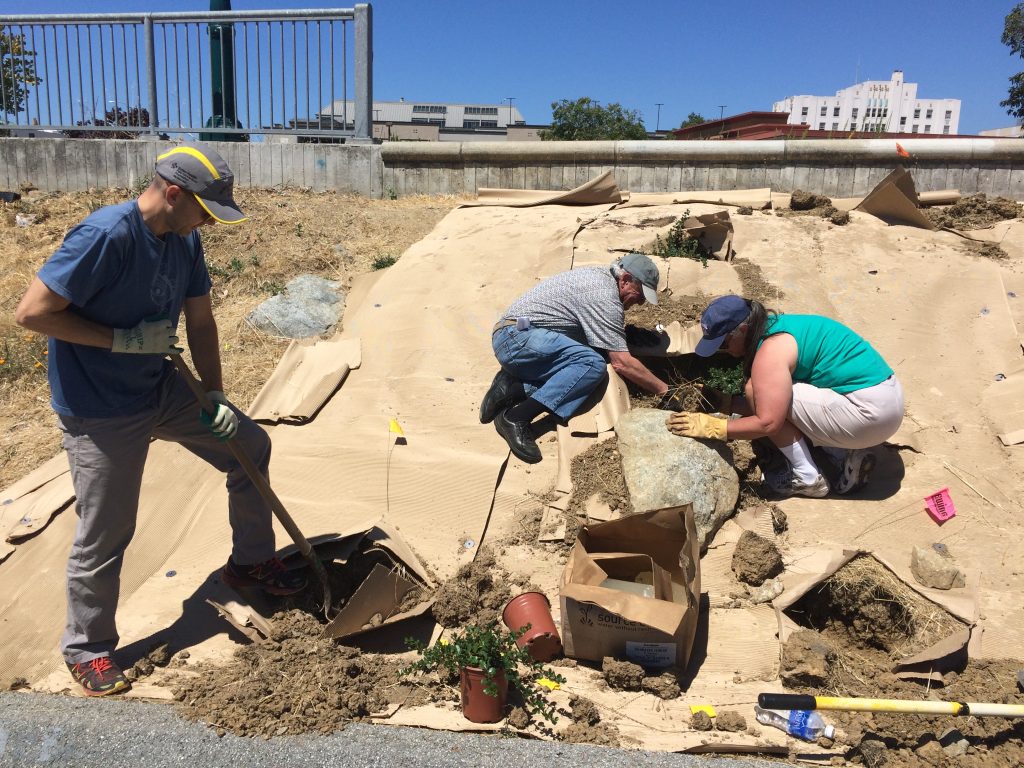 Rotarians and CWC staff plant and sheet mulch at their parklet in late June.

On June 26, the Rotary Club broke ground on a 366-sq. foot parklet on the northeast corner of the Soquel Avenue bridge and River Street. Led by Ecological Concerns Inc. staff, Rotarians planted natives like sticky monkey flower, California lilac, coffee berry and black sage alongside the existing mugwort and California poppy. The park was then sheet mulched, a process of layering cardboard and mulch, to prevent growth of weeds.

Over the next few months, the Rotarians maintained and watered the new parklet. Some plants faired the heat of the summer and welcomed heavy rains in November. Rains brought on thick invasive grasses, a new challenger to the native plants. But the Rotarians were persistent and committed to the success of the parklet. As the weather dried in the spring the Rotary Club returned to remove weeds and add layer after layer of mulch to stifle any further weed growth. Now, the eye-catching orange of the sticky monkey flower and California poppy shine against the color of the mulch. 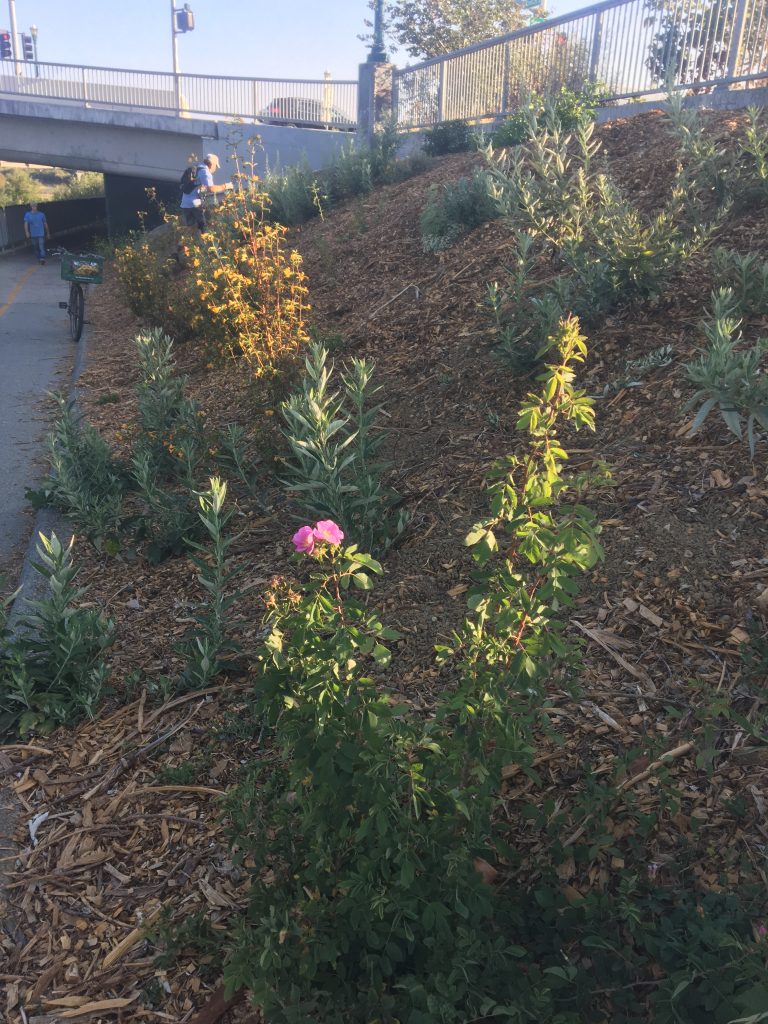 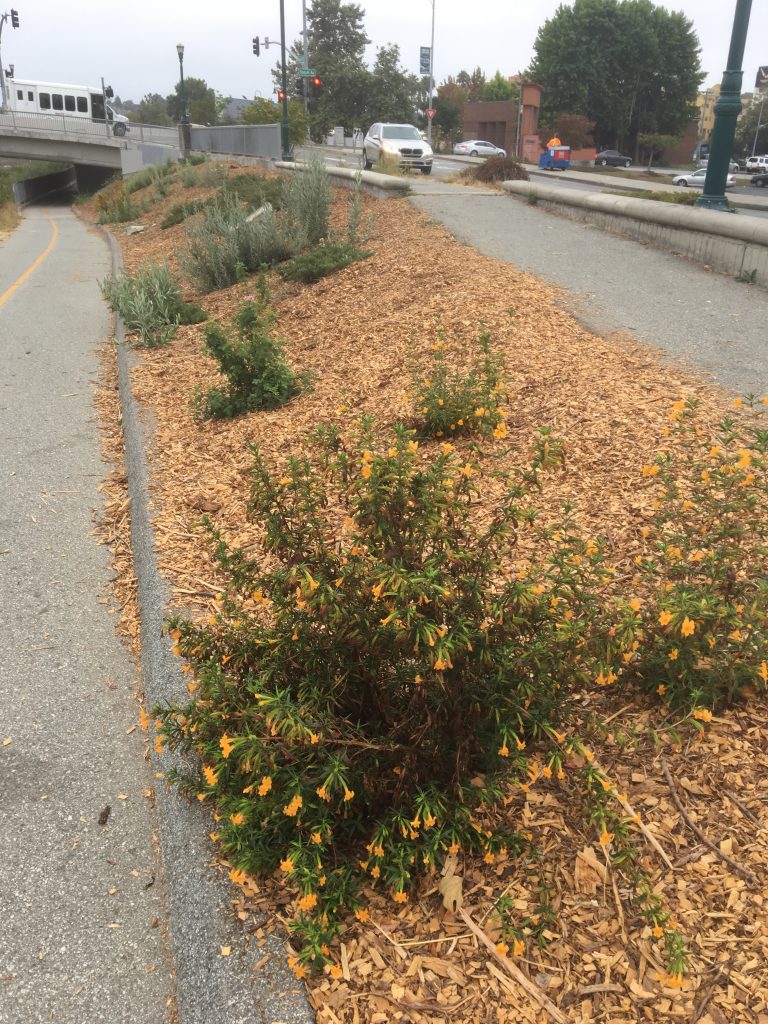 On the morning of July 7th, the members of the Rotary Club of Santa Cruz, Santa Cruz Councilmembers, CWC and ECI staff gathered at the parklet for the unveiling of a new Rotary Club plaque. The congregation recognized the Club members for their hard work and investment in the parklet and their contribution to making the Santa Cruz Riverwalk a beautiful and inviting space.

This fall, the Rotary Club plans to add new plants to the parklet just in time for the rainy season and is prepared to battle it out with the any invasive weeds.

Thank you, Rotary Club of Santa Cruz, for your commitment to your parklet and the improvement of the Santa Cruz Riverwalk. We appreciate you!