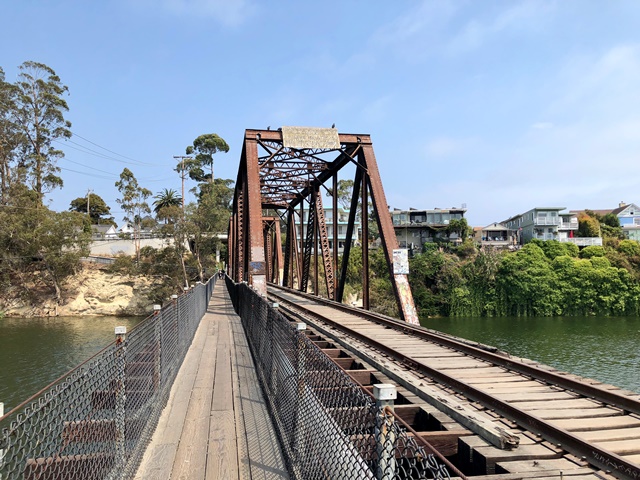 If you’ve ever crossed the San Lorenzo River at the Trestle Bridge in the peak of summer, you know it can be a harrowing experience. There are bikers, dog walkers and beachgoers bumping past one another to get to the opposite bank. Next summer, that will change. On Tuesday, November 13 the Santa Cruz City Council approved the San Lorenzo River Parkway Phase III/Trestle Trail Project construction award to Cushman Construction. The project will replace the existing 4-foot wide walkway on the San Lorenzo River Railroad Trestle Bridge with a new multi-use trail that is 10 feet wide, thanks to a partnership between City, County, state and nonprofit representatives. The Trestle Trail Project will provide direct bike/pedestrian access between the Santa Cruz Beach Boardwalk and the Seabright neighborhood and the Santa Cruz Riverwalk levee path and downtown Santa Cruz.

The 306-foot bike and pedestrian path will be cantilevered from the existing bridge and will connect to the existing access ramps at each end of the bridge. It will be made of steel with fiberglass decking with horizontal cable railings replacing the current chain-link fence. A structural analysis funded by the Land Trust of Santa Cruz County determined that construction upgrading the walkway on the existing trestle system would provide significant cost and time savings. With the cantilevered design, the Trestle Trail Project is slated for completion before Memorial Day 2019. The project cost of $2.03 million is funded with a California Natural Resources Agency grant, Transportation Development Act funds and City of Santa Cruz and Santa Cruz County Regional Transportation Commission Measure D allocations. CWC acknowledges all of the hard work and dedication that City, County, state and nonprofit representatives have poured into this project that will make it easier to access and enjoy the lower San Lorenzo River. Thank you!