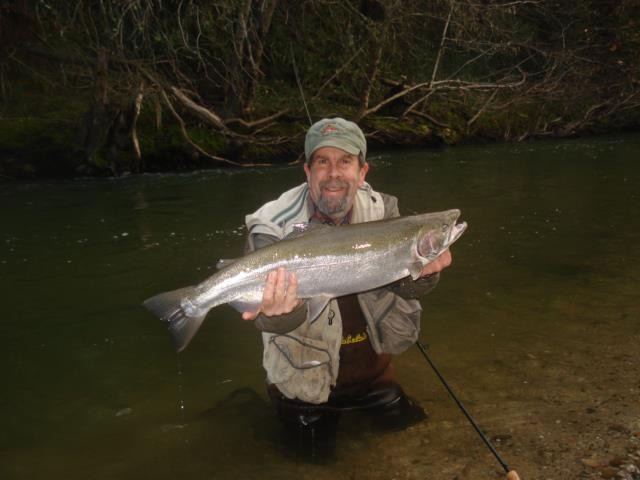 I always look forward to December because it marks the beginning of yet another Steelhead season on the San Lorenzo River. The opener in particular, on December 1st, has been a long standing tradition with me and many of my friends who, not only look forward to the possibility of hooking one of the greatest sport fish on the planet, but also enjoy the comradery of connecting with old fishing buddies that they may not have seen since last season.

Steelhead fishing is the reason and excuse I use to visit the river of my youth. Hitting the river on opening day is like visiting an old friend that you haven’t seen in a year. Though San Lorenzo steelhead runs are only but a shadow of what they formerly were, I still approach each opening day with a certain sense of optimism and the San Lorenzo doesn’t disappoint.

This year’s opener was no different.

The early rains we had in October and November coupled with the high tides and big swells had blown open the mouth of the river and afforded the fish plenty of opportunity to get into the system. It was with high expectations that my buddy, John, and I arrived at the river at O’ dark thirty and began our half hour hike up stream by headlamp to fish our favorite hole on the river.

As first light broke and the mist of early morning rose off the water, I couldn’t help but think of how few people are aware of the mystical, majestic beauty of this small coastal stream and how fortunate I was to still be experiencing its wonders on this crisp December morning. My reverie was soon interrupted by John’s shouts of “Fish on,” and I watched a spunky little smolt (juvenile steelhead) break water at the end of his line. Early season fish are typically on the small side and on opening day we’re usually happy to catch what we refer to as eggeaters or half pounders that average between 16 -20”. These fish have spent only one year in the salt water unlike the mature adult spawners that come in later in the season and can average 8-10 Lbs. and measure as much as 36”. Smolts on the other hand have never been out to sea and will at some point in the next year migrate out to the ocean. A good smolt population is a good sign of the overall health of the river and an excellent indicator that future runs will be abundant so it was with the utmost of care that john released his fish unharmed. This was to be one of dozens of smolts we caught that day and although we we’re pleased to see that every hole we fished was loaded with these 10-12” residents, we were hoping to hook some lager chromers straight out of the ocean.

Those who have fished this river consistently will attest, the mighty San Lorenzo doesn’t give up her fish easily. By the end of the day, after covering 5.2 miles on the river and putting in 6 hours of fishing time, we both managed to each land a handful of respectable eggeaters that fought like crazy and John actually hooked and lost one nice mature adult that he claims may have gone almost 6 lbs. They are always bigger when you lose them. All in all it was a very satisfying day on the river.

So begins another steelhead season on the San Lorenzo.

We are so fortunate to have so close at hand such a diverse venue to fish for these magnificent fish. Historically the San Lorenzo was one of the most heavily fished rivers on the California coast and sustained one of the healthiest populations of steelhead as well as Coho salmon. Even though we will probably not see those numbers today, it is still exciting to me to know that I could be catching fish downtown in an urban environment by street lights in the morning and on the same day finish up by fishing the wild stretch of the river in the gorge surrounded by temperate redwood forest.

What a treasure we have in this wonderful resource!

Barry Burt has been a resident of Santa Cruz County for the past 55 years. He is a retired educator from San Lorenzo Valley Unified School Dist. Barry was the Educational Coordinator of the Monterey Bay Salmon & Trout Project and created the STEP (Salmon&Trout Education Program). He is an avid fly fisherman and a conservationist and is currently Chairman of the Santa Cruz Fly Fishermen.