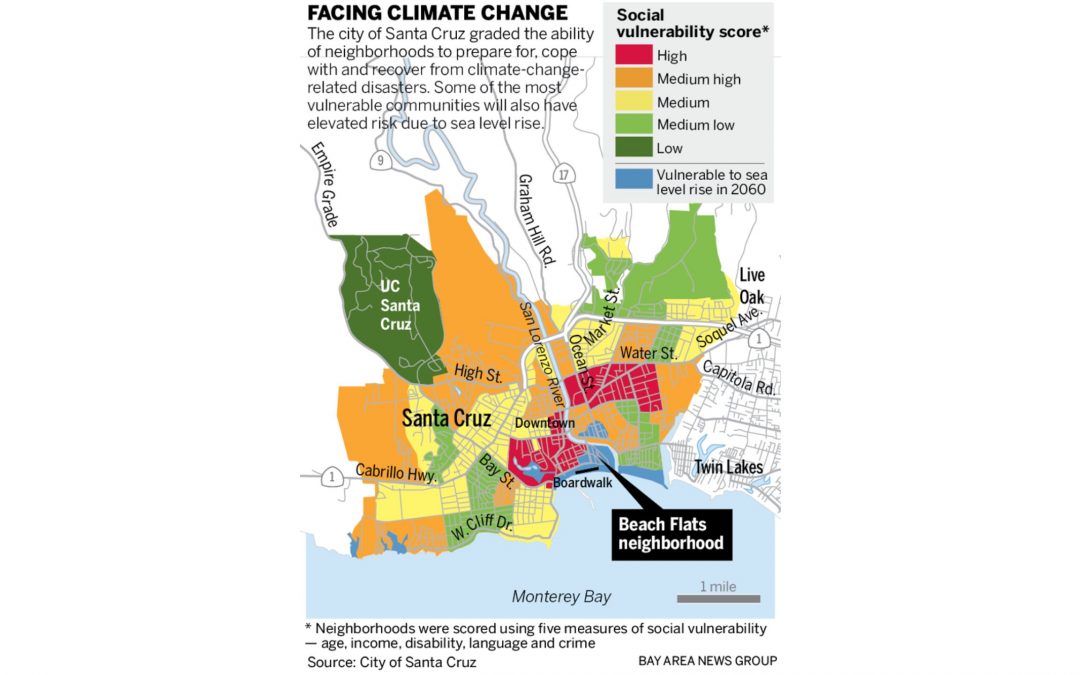 Residents who live along the lower San Lorenzo River are predicted to experience more extreme storms and flooding as a result of climate change. The Beach Flats and Lower Ocean neighborhoods, which straddle the mouth of the San Lorenzo River where it enters the Monterey Bay National Marine Sanctuary, are highly susceptible to flooding due to the combined impact of proximity to the river and sea level rise.

To address these pressing coastal issues, the City of Santa Cruz launched Resilient Coast in 2019, a collaborative initiative to unite government, research, nonprofit and residents. A study conducted under this project in 2019 by the City of Santa Cruz, University of California Santa Cruz Coastal Science and Policy graduate students, and San Jose State University instructors and graduate students demonstrated that:

In 2022, the Coastal Watershed Council joined the effort, now dubbed Resilient Coast 2.0. In our role, CWC is supporting engagement in the Beach Flats and Lower Ocean communities through a series of bilingual monthly conversations with residents about how to increase preparation and response for climate impacts. These conversations are led in partnership with Nueva Vista Community Resources (a program of Community Bridges), the City of Santa Cruz, UC Santa Cruz and San Jose State University. CWC has received funding from River Network to launch this new facet of our work in this riverside neighborhood.

While this project may be new to CWC, it is built upon a 10-year foundation of leading youth programs in the neighborhood through after-school, spring break and summer camps as well as river-focused community art, highlighting the stormwater infrastructure that keeps the community safe. In the years ahead, CWC will continue our leadership and participation in this project to support Beach Flats and Lower Ocean residents in preparing for the storms ahead.