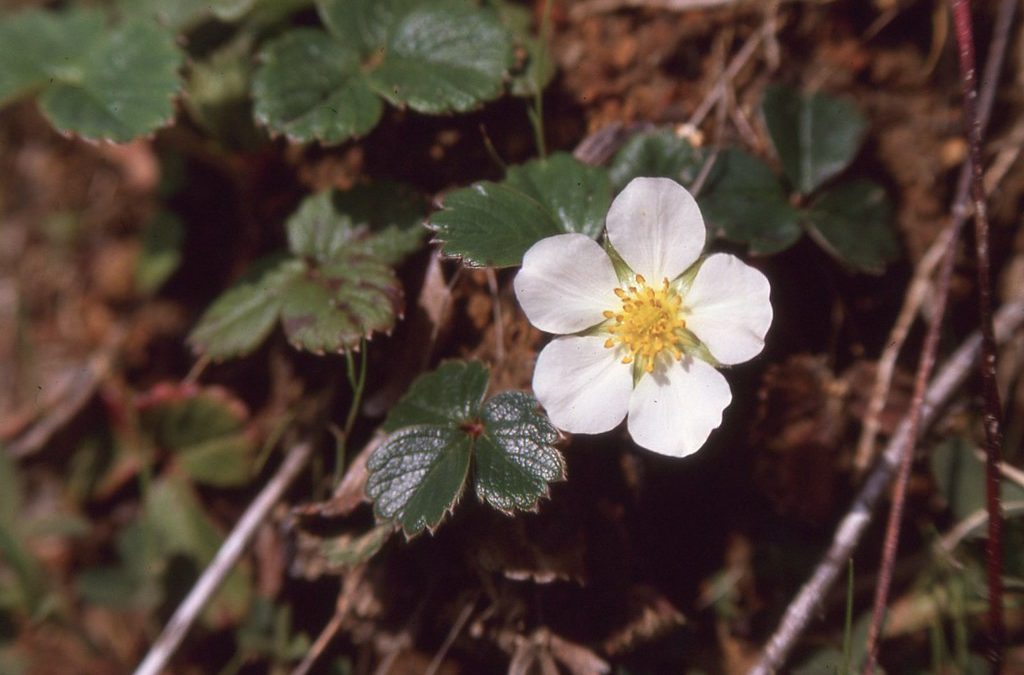 Every second Saturday of the month, CWC (Coastal Watershed Council) leads River Health Days where volunteers help plant and care for a variety of native plant species to increase biodiversity and habitat complexity and support a healthy river ecosystem. Beach Strawberry (Fragaria chiloensis) is one beneficial plant you may spot growing along the river.

Beach strawberry is in the family Rosaceae alongside blackberries, raspberries, and many more species. It is a perennial herb which resides on the pacific coastline from Alaska all the way down to the coastline of Chile. Beach strawberries have three large glossy leaves adapted for protection against the harsh elements of the coastline. In late springtime and early summer beach strawberries develop a white bloom which once pollinated turns into a delicious strawberry. It grows by stolons also called runners which are creeping horizontal plant stems that allow the plant to asexually create new plants or clones. They are short ground cover species spreading several feet but only at the height of 1-4 inches. Beach strawberries are very drought tolerant and need minimal maintenance.

The name Fragaria is latin for fragrant which accurately describes the sweet aroma from the flower. Nocturnal pollinators like moths are attracted to their scent and to something unexpected: the white petals. In the moonlight the white petals of these plants reflect the moon and create a landing strip for nocturnal pollinators. Beach strawberries also create a relatively large fruit that is an important food source for coastal bird species. Birds are actually presumed to be the main reason beach strawberries range has increased. It is also speculated that they dropped seeds on the mountains in Hawaii where the species thrives today.

Many California tribes used beach strawberries for both medicinal and dietary purposes. California native americans used strawberries fresh, dried, and preserved. They preserved their strawberries into delicious jams and jellies. The Pomo tribe were some of the first peoples to have their very own strawberry festival. They celebrated it in mid-spring when the first berries of the year were seen. Only after the festival were tribal members allowed to harvest strawberries.

Many California  tribes used the strawberry plant for their ailments as well. Wild strawberry leaves were used to brew teas high in vitamin C. A tea was also made from the roots for relief of stomach disorders. The roots were also chewed to reduce gum inflammation and clean teeth. Strawberries were one of the many native plant resources that California Native Americans tended to and used for many generations up until this very day.

Today western society doesn’t use beach strawberries for much of anything. However California and its booming farm culture can be attributed to these cute little fruits. In France in the 1750’s  Fragaria chiloensis hybridized with Fragaria virginiana to make our first Modern Day Strawberries. Now California grows 75% of modern day strawberries at the rate of 1 billion pounds a year. Next time you eat a delicious strawberry say thank you to the Native Tribes that tended them, and the farmers who worked long and hard to bring us this tasty treat.

You can make a difference in the San Lorenzo ecosystem by caring for Beach Strawberry and other native plants that enhance the ecological value of San Lorenzo River habitat. Join other volunteers at monthly River Health Days to plant more native species. Sign up below!