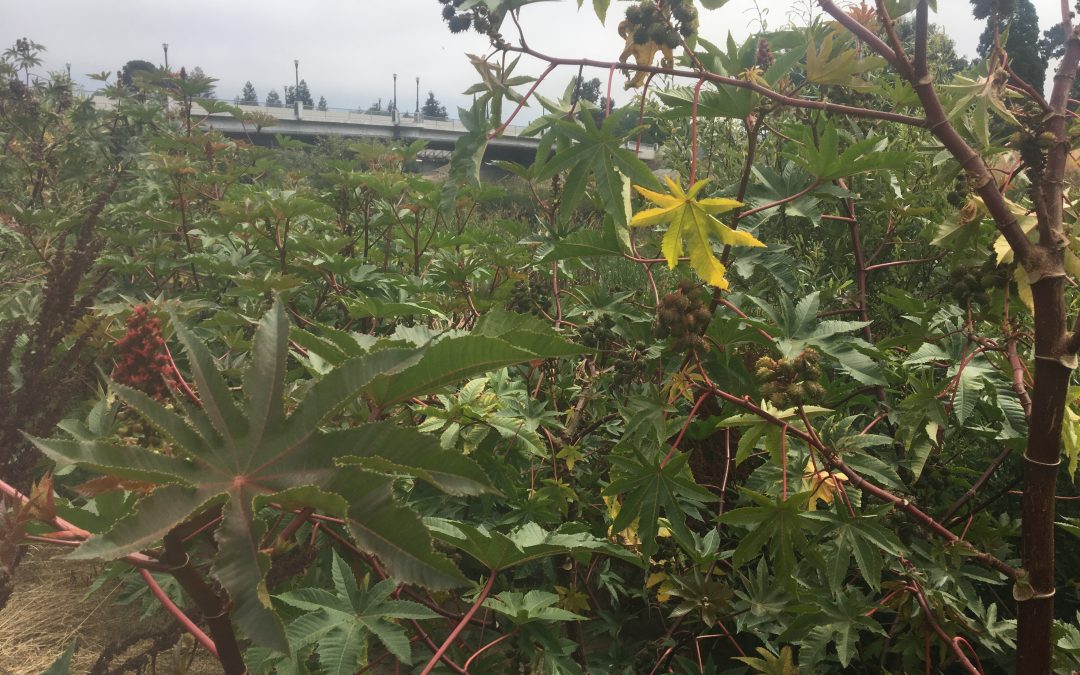 Streamside plants play an integral role in a healthy river ecosystem. Native trees distribute leaves for nutrients and they provide shade to cool water temperatures and shelter fish from predators. Their root systems slow and sink urban and natural runoff and stabilize the river banks. Native plants also sustain insects, such as ants and flies, which in turn aerate the stream bank soil, distribute seeds, and act as an important food source for amphibians, birds, and fish.

By contrast, invasive plants along the river corridor do not provide the same ecological support as natives. Their deep narrow root structures reach moisture quicker than native counterparts and do not provide structural support to a riverbank. The lower San Lorenzo River is home to native plants like willows and alders that provide nutrients and habitat for birds, fish and bugs. It is also now home to stand of castor bean: relatively new on the scene but quickly taking hold.

Once called “Thunder Trees”, the Castor Bean originated in Eastern Africa and indigenous peoples believed that the tall plant protected them from lightening.  The Castor Bean was later cultivated in the United States for a multitude of uses from motor lubricant for internal combustion engines during World War I, to mosquito repellent, pain relief, and even skin cancer treatments! Now, it spreads across the southern half of the United States and is present in our very own San Lorenzo River watershed. 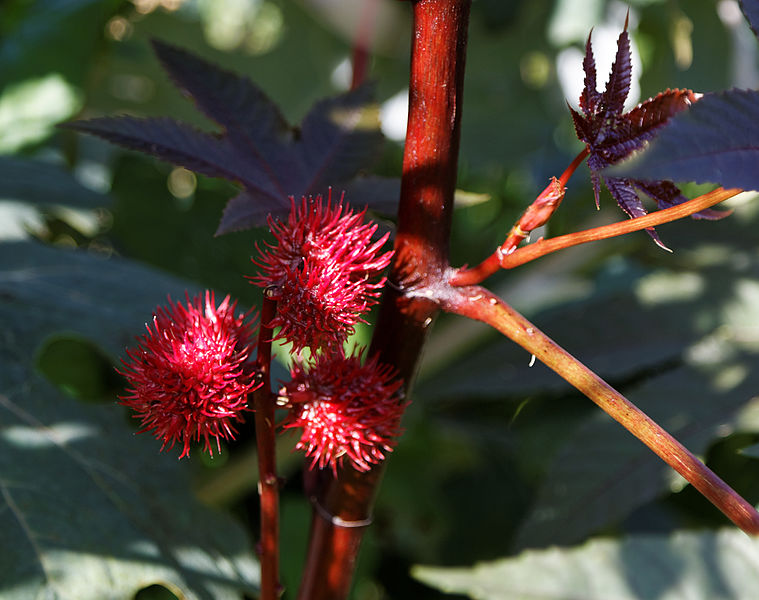 The Castor Bean is a perennial shrub that can grow up to fifteen feet tall.  The plant grows a tubular tap roots, which unlike the web-like root structure of willows, do not effectively slow runoff or stabilize banks. Castor Bean grows rapidly and has thick palm like leaves that effectively shade out native plants. Without abatement the castor bean will grow in monospecific patches. Castor bean is particularly harmful to the surrounding ecosystem because of its toxicity. With a high concentration of ricin in the seed and leaves, the plant can poison local fly, beetle, and ant populations and deposit ricin into the river ecosystem.

Because of the allergenic nature of the plant, castor bean needs to be removed by professionals with equipment. We do not recommend volunteers or concerned citizens take on removal. But, you can still make a difference in the San Lorenzo River ecosystem by helping with the removal of other invasive plants. Volunteer with River Health Days to learn about native plants and also identify and remove invasive species.  Sign up to for upcoming August River Health Days now and stay tuned for more in September!