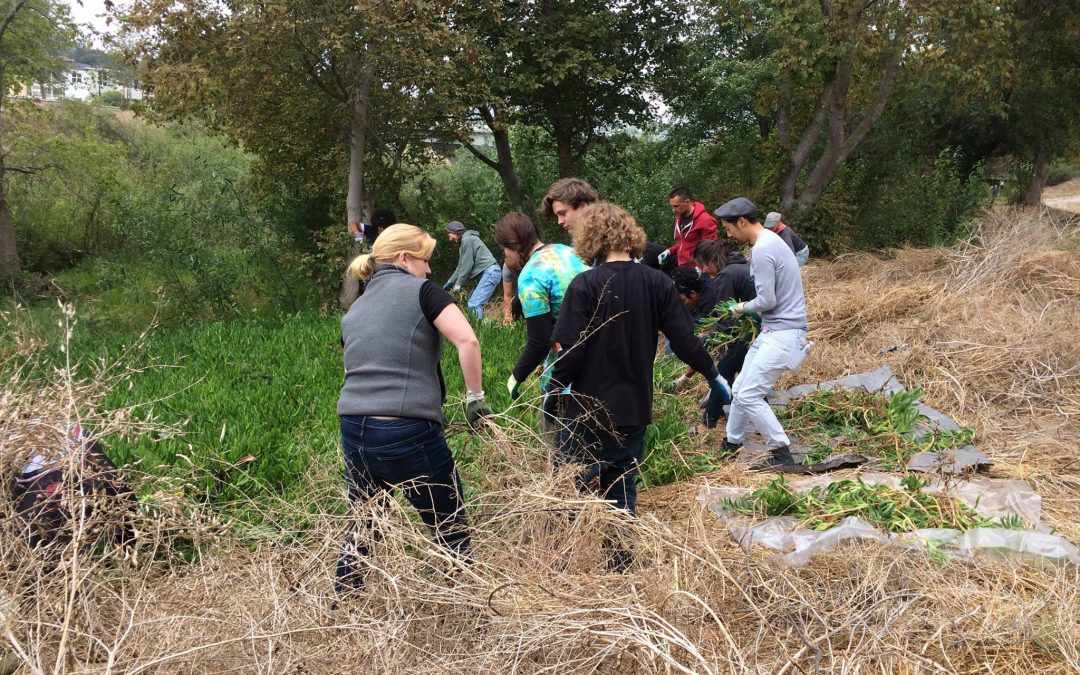 On an overcast morning of September 9th, the San Lorenzo River was quiet and serene through a screen of cat tails and native grasses. Coastal Watershed Council and group of 20 volunteers from the Santa Cruz Museum of Natural History, Ponderosa High School and the Bosch Baha’i Center of Learning convened at the banks of the San Lorenzo River with a common objective: restore riparian habitat in order to improve the health of the San Lorenzo.

Led by plant aficionado and Habitat Restoration Program Leader of the California Native Plant Society, Linda Brodman, we set out to remove ice plant, an invasive plant rampant along the Central Coast and now cropping up along the San Lorenzo River. Native to South Africa, ice plant was first introduced as a hill stabilizing plant along California highways. Unfortunately it also grows rapidly, choking out native species that birds and insects rely on. As we tore out clumps of ice plant and hauled it out of the site some exclaimed at the water weight of the meaty succulent.

We were thrilled to come across native blackberry vines burrowed within the ice plant and preserved them with care. Linda pointed out distinctive features of the iceplant including the fig-like seedy fruit. At the end of the 2 hour process we looked proudly on the embankment we had cleared. The soil was moist and fresh, a perfect site for new native seeds. Or even a picnic!

If you would like to help with invasive removal and spend time along the San Lorenzo River, join CWC at the next  River Health Day, September 30th from 10 to 1.