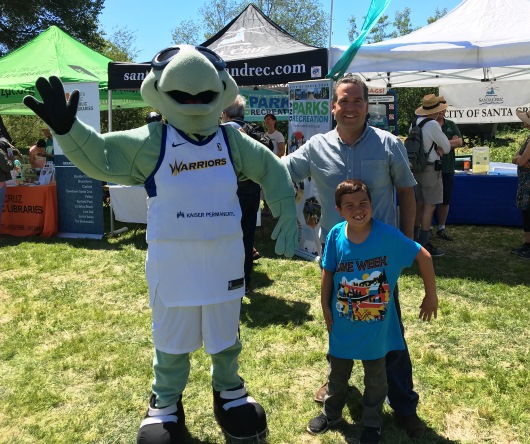 The City of Santa Cruz welcomes young and old to a Street Smarts Family Bike Ride from 10 a.m. to noon on Saturday, June 30. The event commences at Laurel Park, adjacent to Louden Nelson Community Center, 301 Center St., and is part of the Street Smarts quarterly traffic safety series hosted by the Santa Cruz Police Department.

Ecology Action staff will lead bicyclists through town and along the Santa Cruz Riverwalk to the Penny Ice Creamery for free ice cream. Santa Cruz Police officers will participate on the ride in uniform. The bike ride departs at 11 a.m. and returns by noon to and from Laurel Park.

From 10-11 a.m. bike safety activities are offered at the park including helmet fittings and free bike tune-ups with Spokesman Bicycles. Santa Cruz Warriors mascot Mav’Riks will be teaching correct bike turn signals to youth and Ecology Action will dramatize helmet safety with a melon drop demonstration.

The Santa Cruz Police Department and AAA will each host traffic safety booths with games and prizes and Sgt. Scott Garner will be available to answer traffic safety questions. There will also be a bike decorating station.

The City is grateful to the Penny Ice Creamery for its generous donation to this event and to Ecology Action, Spokesman Bicycles, Santa Cruz Warriors and AAA for their participation.

All participants must sign a liability waiver which will be provided at the event.

Street Smarts is a City of Santa Cruz traffic safety campaign with mission to reduce the number of traffic-related crashes and injuries in Santa Cruz. Year one of the campaign is funded in part by AT&T/It Can Wait and AAA Northern California, Nevada & Utah. More information is available at www.cityofsantacruz.com/StreetSmarts.