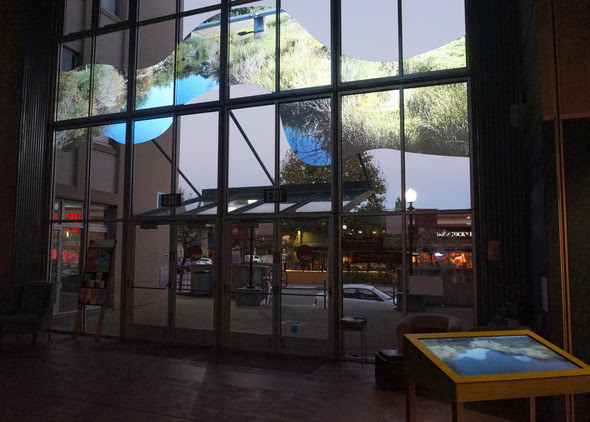 For the past year Camille has been collaborating with Santa Cruz Museum of Art and History to create a site-specific artwork for the museum’s lobby. The project is funded by a Creative Work Fund Grant received in 2015. The artwork opened to the public at the Glow Festival on October 22 and will be on view for at least a year.

If you would like to see Vital Current – Seeking the San Lorenzo, Camille will plan to be on site on December 2, during the Free First Friday, from 6-9pm. The event includes a cash bar, live music, and art activities for all ages.

Utterback’s interactive installation for the MAH lobby provides a visceral experience of interacting with contemporary and archival images and video of the San Lorenzo River, which flows through Santa Cruz and is key to the city’s location and history. The artwork consists of a large-scale river shaped projection in the lobby windows depicting a dynamically changing collage of historic and contemporary images of the river. Participants can explore the visual history of the river from the 1800s through today by “dipping” their fingers into the river via a touchscreen interface housed in a custom kiosk in the lobby. Interacting with the kiosk causes images of the past and present to appear and intermingle in the projection.

To create this work, Utterback has collaborated with archivists, librarians, historians and many individuals in the Santa Cruz community. Images and video featured in the piece are drawn from the MAH archives, The Santa Cruz Economic Development Group archive, The Santa Cruz Public Library, the UC Santa Cruz Special Collections at the McHenry Library, Oddball Film & Video, the Santa Cruz Museum of Natural History, and the personal collections of many individuals who generously shared their photos and films for this project. To gather these images Camille has also received valuable support of The Coastal Watershed Council and Santa Cruz County Arts Council.