Join us for the kick-off of the Exploring the San Lorenzo River Series, weekly interactive tours on the topic of fish and bird species of the watershed co-hosted by the Coastal Watershed Council and Santa Cruz Museum of Natural History. Learn about and explore the ecology of the San Lorenzo River with experts.  Tours are open to all ages and will be hosted every Saturday from 8:30 to 10:30 from February 18th through March 15th culminating in a San Lorenzo River Bioblitz on Earth Day April 22nd.

On the February 18th kickoff tour, we will discuss coho salmon families and the science behind what keeps them returning to their home streams. The tour will include games to explore how scientists use DNA and genes to preserve diversity in small populations of salmon and chat about the role of this science in salmon hatcheries. This tour will meet here at the Riverwalk next to the Courthouse. Parking is available in the County building parking lot. The tour will be led by Diana Baestcher and Hayley Nuetzel. 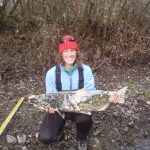 Diana is a PhD candidate in the Ocean Sciences department at UCSC. She uses genetic methods to study fish populations, ecology, and evolution. Her thesis research investigates movement of rockfishes in Monterey Bay. Diana previously studied and admired salmon from many vantages, including field projects and restoration work throughout Northern California. Her research group within the National Oceanic and Atmospheric Administration (NOAA) uses research to inform fisheries management including work with salmon and Steelhead hatcheries statewide. 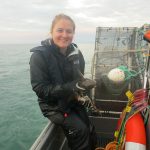 Hayley is a second year PhD student in a cooperative research unit at the Southwest Fisheries Science Center in Santa Cruz, which includes NOAA and UCSC researchers. Her thesis work will utilize genetic and genomic data to understand the processes of speciation and adaptation within a group of highly diverse marine fishes (Sebastes spp. or rockfishes). Hayley has also used genetic tools to understand the influence and contribution of hatcheries to nearby coho salmon populations in California,
thereby informing management and conservation efforts.

To learn more, contact CWC River Scientist Alev at abilginsoy@coastal-watershed.org. To sign up for the tour fill out the form below. Tours are marked “Fins” for fish tours and “Feathers” for bird tours. You can sign up for one or for all of them.

The Exploring the San Lorenzo River Series in funded by the Santa Cruz Fish and Wildlife Advisory Commission and Clif Bar Family Foundation and Ebb and Flow.