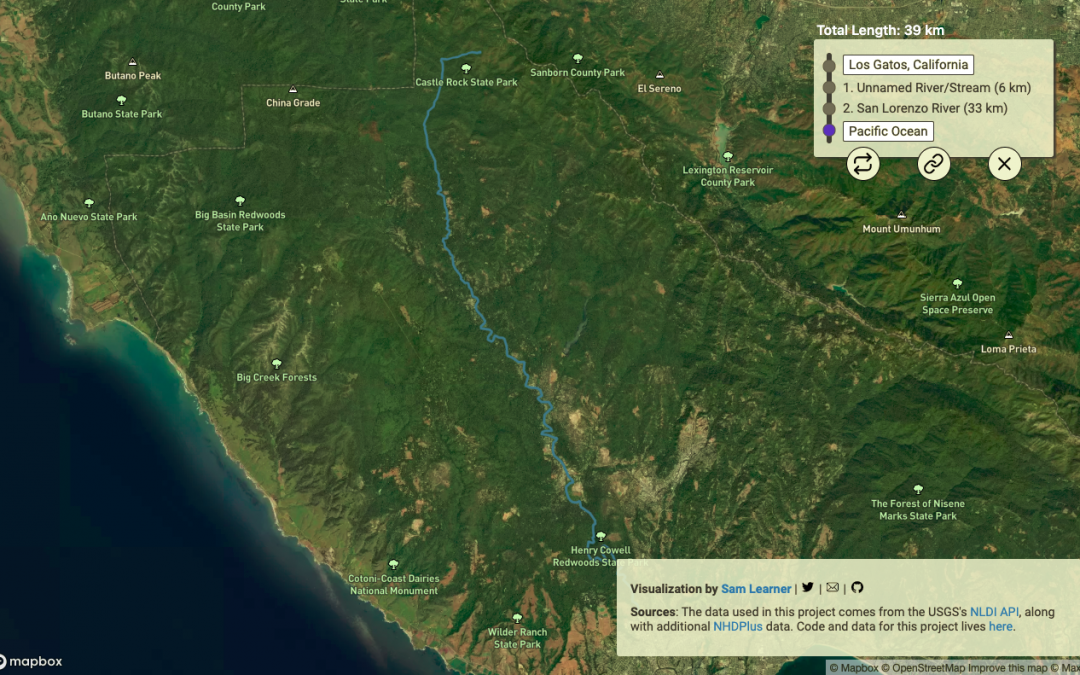 We commonly ask people attending CWC events: “Which watershed do you live in?” Many of us know, though it’s also something a lot of people don’t think about. Now there’s a cool map animation showing where water flows when a raindrop falls anywhere in the continental United States. For some, it could make it more fun to pay attention to watersheds, creeks and rivers.

Named River Runner, the project developed by Sam Learner lets you place a point anywhere on a map of the continental U.S., then virtually accompany a drop of water from that point as it travels to the ocean or its eventual destination. (Wait, doesn’t all water flow to the ocean? Not everywhere, as sometimes a river drains to a closed inland lake.) Here is an example of a River Runner animation, showing the path a drop of water takes to Monterey Bay from the San Lorenzo River headwaters near Castle Rock State Park in the Santa Cruz Mountains, a trip of approximately 39 miles: Running the San Lorenzo River, source to sea, using River Runner by Sam Learner

(Maybe this silent video should be backed by a soundtrack, perhaps Creedence Clearwater Revival’s “Have You Ever Seen The Rain?“)

Map and technology enthusiasts, river lovers, educators and others are loving the new tool and having fun exploring in a new way. CWC Education Manager Mollie Behn sees the tool as a fun way to engage students and others in watershed exploration, adding “We’re definitely sharing River Runner with teachers and showing kids how this is one more way to get to know their watershed.”

Paul Roger’s piece in the San Jose Mercury shares some more details about the development of the project. As Rogers points out, with the onset and continuation of this current drought, River Runner offers a way to learn about and pay more attention to where our water comes from and where it goes. An interesting companion tool might be a map that shows a user where their drinking water comes from, as it’s easy to get confused about groundwater and surface water sources in a given area and which water agency serves a particular area.