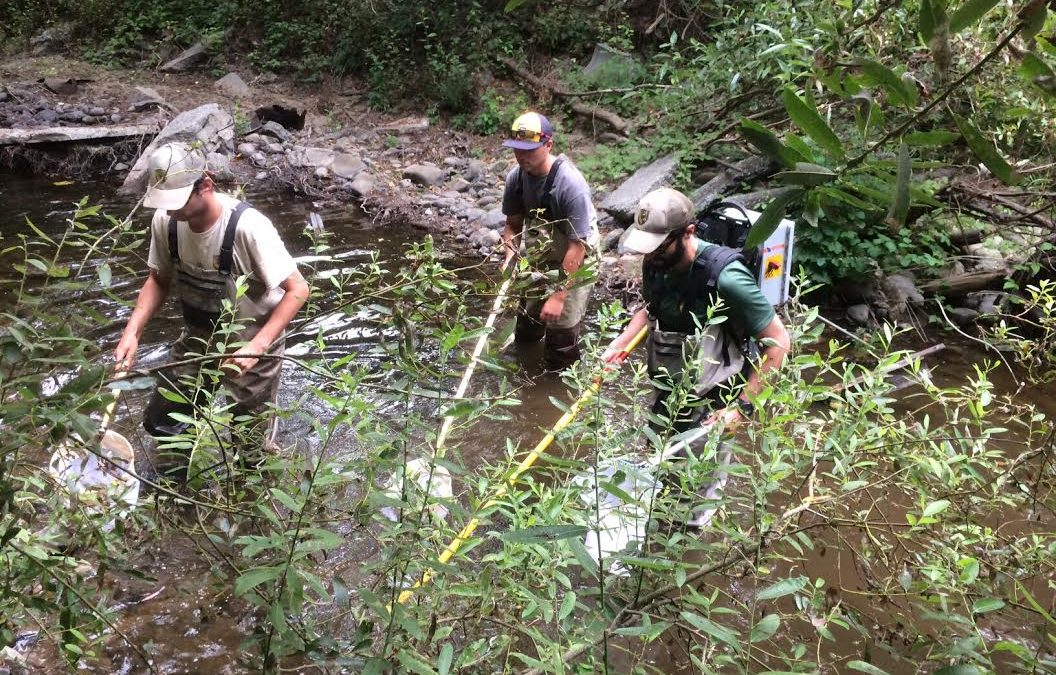 “The lower reaches of Corralitos Creek were drying up by August 3, 2017. Already long stretches were dry with small pockets of clear water; some pools were already dead due to heat and lack of oxygen, but most were still alive with small Steelhead, stickleback, sculpin, suckers and crawdads. Our goal was to re-locate as many of the Steelhead as possible to the upper reaches of Corralitos Creek, where the water flows year around. (It is against the law to relocate the fish to a different watershed.)

Two years ago there was what many of us consider a disaster on Bean Creek. Thousands of Steelhead were trapped in a stretch of the creek that was drying up. There was plenty of time to rescue and relocate them, but there was no process was in place. Because Steelhead are an endangered species, they could not be relocated without approval by a few government agencies (NOAA & CDFW). It took a month to get approval and by then all the fish were dead. No one wants that catastrophe to happen again.

A team was assembled headed by Kristen Kittleson of the County of Santa Cruz County, Jon Jankowitz of California Fish & Wildlife, and Chuck Backman, Seth Bowman and Sam Bishop of the Monterey Bay Salmon & Trout Project. The team consisted of the above, plus several volunteers. We assembled near Corralitos Market, got our instructions and divided into teams: Team 1) Rescue (electro shock, net and put fish into buckets, transport to the holding trucks, Team 2) Holding truck team, receiving the fish, counting and ensuring that the tanks were aerated and Team 3) Relocation team, hauled the fish in the truck up to locations like the Varni Bridge and released the fish.

Slowly and methodically, Jon and his assistant Kyle would use an electroshock (looks like GhostBusters) device to ferret the fish out from under woody and rocky cover. They, plus a couple of other volunteers would net the fish and put them into buckets with aerators, which others of us carried. It was very rocky stream bed, crisscrossed with fallen trees and saturated everywhere with poison oak, so caution was the order of the day. Only one temporary casualty and that was when I punctured the top of my head through the cap, while going under one of those fallen trees. But at this writing I don’t know if I or anyone else caught the dreaded poison oak affliction. I know my clothes went straight to the washing machine that night.

Along the way in the streambed we met a local lady who told us this long dry stretch we were on at that moment had been flowing nicely only seven days before. In fact she pointed upstream to where it had been flowing only 2 days before, so it was clear we could not have waited any longer.

The team with additional volunteers, including more Santa Cruz Fly Fishermen members was prepared to go out again the next day, but the stream had already dried up so much that we went much faster than expected and were able to finish up around 4:00 p.m. I then adjourned to the Corralitos Brewery where I regaled the fellow imbibers about our heroic actions to save the Steelhead! Got a free beer too.”

Written by Sam Bishop, Monterey Bay Salmon and Trout Project and past president of the Santa Cruz Fly Fishermen