The Coastal Watershed Council loves steelhead, the ocean-going “anadromous” form of rainbow trout. This blog post offers an exploration of San Lorenzo River steelhead trout history based on conversations with local scientists, first-person experiences, and stories from the community. We’d love to hear from you if you have more to add, or any suggestions or corrections to offer!

Steelhead trout, or “steelies”, are incredible fish! They spend the first 1-3 years of their life in the San Lorenzo River before migrating to the ocean for up to 3 years, then they find their way back to the San Lorenzo to lay their eggs. Steelhead trout have a similar life cycle to salmon, however one main difference is that salmon die after laying eggs. Steelhead have been known to lay eggs, return to the ocean, and then come back to spawn again in following years. Steelhead are more resilient than “normal” salmon but are still included in the group called salmonids.

Rainbow trout and steelhead are actually the same species! Some rainbow trout have genetic predisposition or are put into environmental conditions that lead them to leave the river system and migrate to sea. We have a term for those ocean going rainbow trout- We call them steelhead! Their name is because of the silver color of the ocean adults. 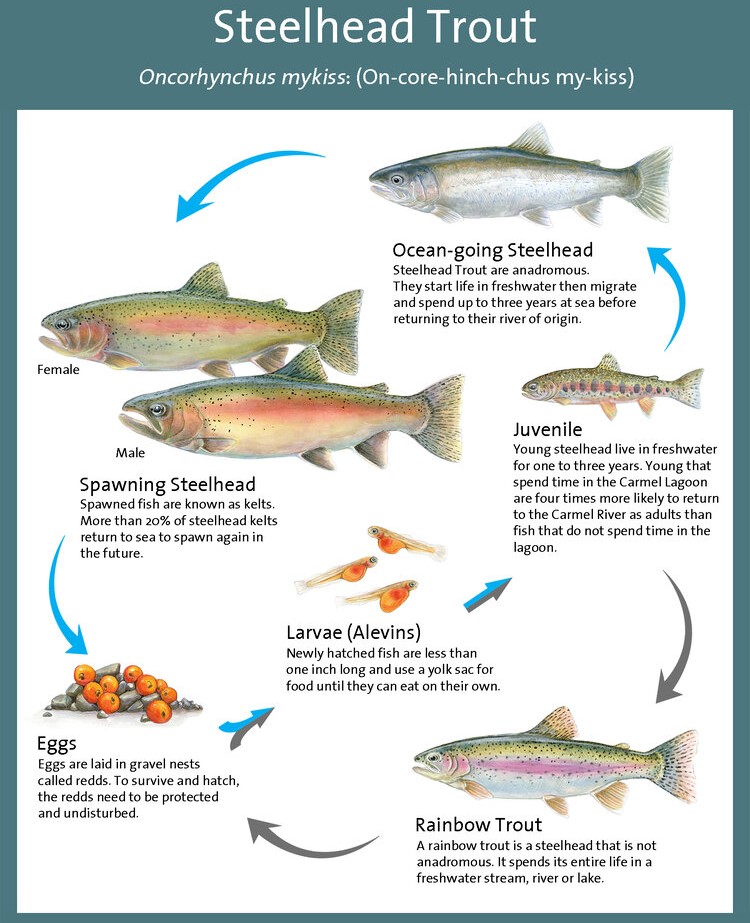 Steelhead are important to the environment for many reasons! One of the reasons is that they connect land and sea. Steelhead trout grow up in the river system and migrate out to the ocean where they can become huge (over 3ft long) by eating mostly krill, shrimp, and anchovies. When steelhead swim upriver to spawn for the last time, their decomposing body returns nutrients from the ocean to the forest ecosystem. Literally! Researchers study how trees benefit from nitrogen in decomposing steelhead carcasses brought on land from bears and raccoons. Steelhead, alive or dead, provide nutrients for hundreds of species and are prey to animals like birds, raccoons, bears, and other fish.

Humans have been fishing and eating steelhead on the California coast for over 10,000 years. Steelhead and salmon continue to be a staple food for many Indigenous communities and are typically fished for near the river mouth, as ocean adults begin migrating upriver to spawn.

The San Lorenzo River used to be regarded as one of the best steelhead rivers in the country. From Indigenous peoples to Spanish settlers and through the Victorian era, the abundance of steelhead trout was one way the San Lorenzo River supported thriving communities. Unfortunately, through unregulated historic industries such as logging, limestone quarries, and leather tanning (to a lesser extent), the San Lorenzo and its steelhead trout sustained an incredible amount of damage. Overfishing of steelhead trout may have also caused an impact, though today’s modern anglers are some of the strongest advocates and supporters for healthy rivers and streams with boots on the ground and eyes on the river!

Cold, deep pools where steelhead hide from predators filled in with loose sediment, sand and silt, because of soil disturbance from logging. The loss of pools decreased habitat and increased water temperatures, which threatened steelhead. The gravel beds steelhead need in order to keep their eggs safe after spawning can also be covered by sand and silt, eliminating water flow between the gravel and suffocating steelhead eggs. This fine sediment can smother habitat for water insects, the main source of food for steelhead, too. Pollution from chemicals and tannins from tanneries made water toxic for wildlife, and in the early 1900s, dams built on the San Lorenzo River for swimming and boating recreation blocked fish passage. This was a bleak time for the San Lorenzo River and the steelhead have not bounced back to anywhere near their previous populations. 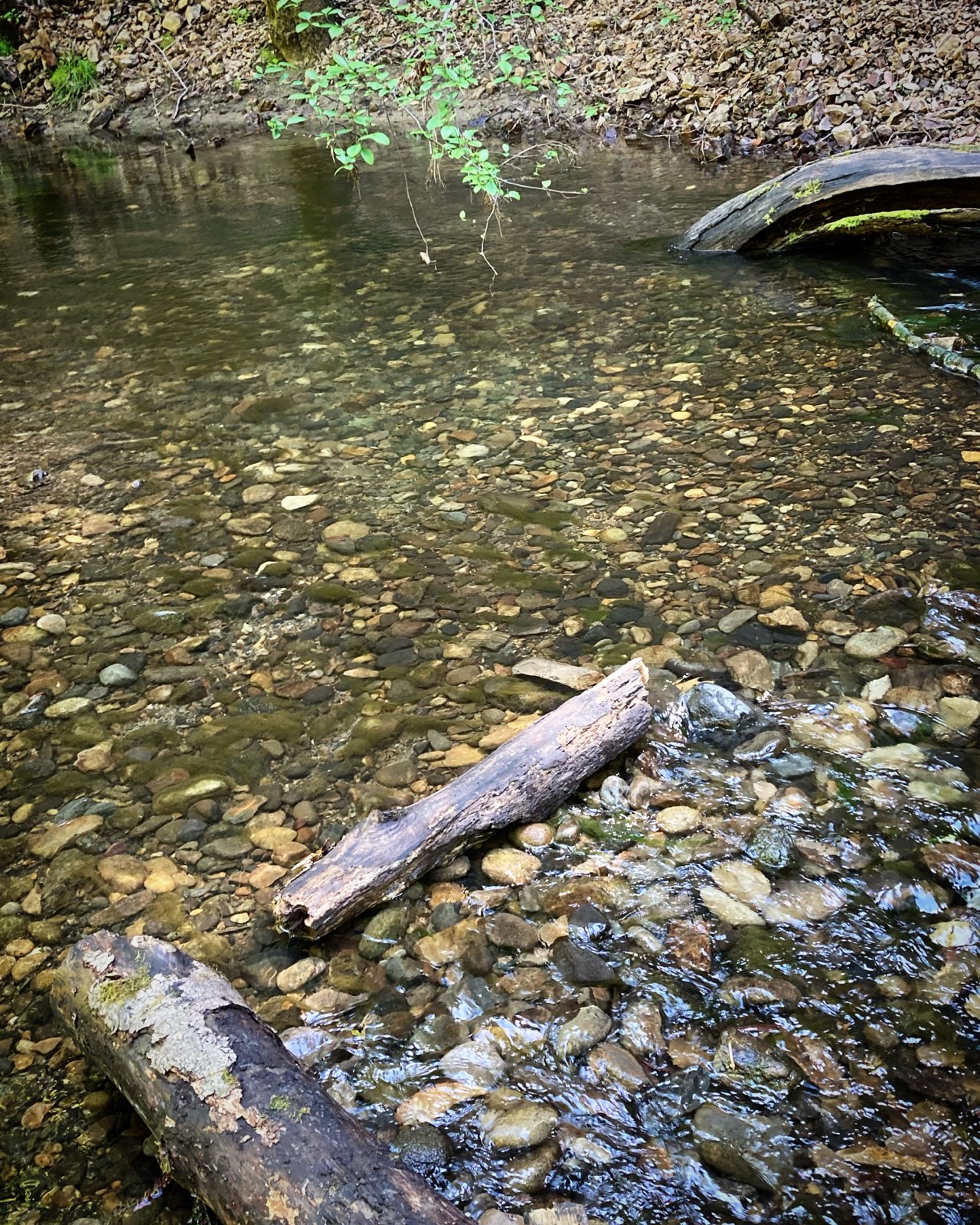 Fishing for steelhead on the San Lorenzo River is now catch and release only, and is carefully regulated due to the low populations and the listing of steelhead as Threatened under the Endangered Species Act. Because steelhead are so resilient and because humans have stepped in to support them, we can be optimistic about their protection and recovery!

It has been said that the San Lorenzo River is cleaner than it’s been in 100 years. We have allowed the mountains to slowly reforest, ceased our impactful extractive industries, and eliminated much of the toxic pollution. Storms continue to pump excess fine sediments out into the ocean, a process that may take hundreds of years or more, but the steelhead aren’t going anywhere. Today’s threats to steelhead trout include the invasive New Zealand Mudsnails which outcompete the water bugs that steelhead trout eat, resulting in less food availability for juvenile fish, and lower stream flows due to factors including population growth and climate change.

You can help protect San Lorenzo River steelhead trout! Conserving water is a great practice- When we save water, there is more water in the river for steelhead! If you have a yard, make sure your soil is covered by plants or mulch to prevent excess sediments from washing into our streams, filling in pools and gravel beds. Leaking sewer laterals connecting houses to the sewer system and septic systems are a major cause for concern- If you are a homeowner please look into getting your sewage pipes and septic system inspected for leaks. Lastly, share what you know about protecting steelhead trout with others!

As a wise 3rd grade Watershed Ranger once said, “We can all be a hero. A hero for fish!”.