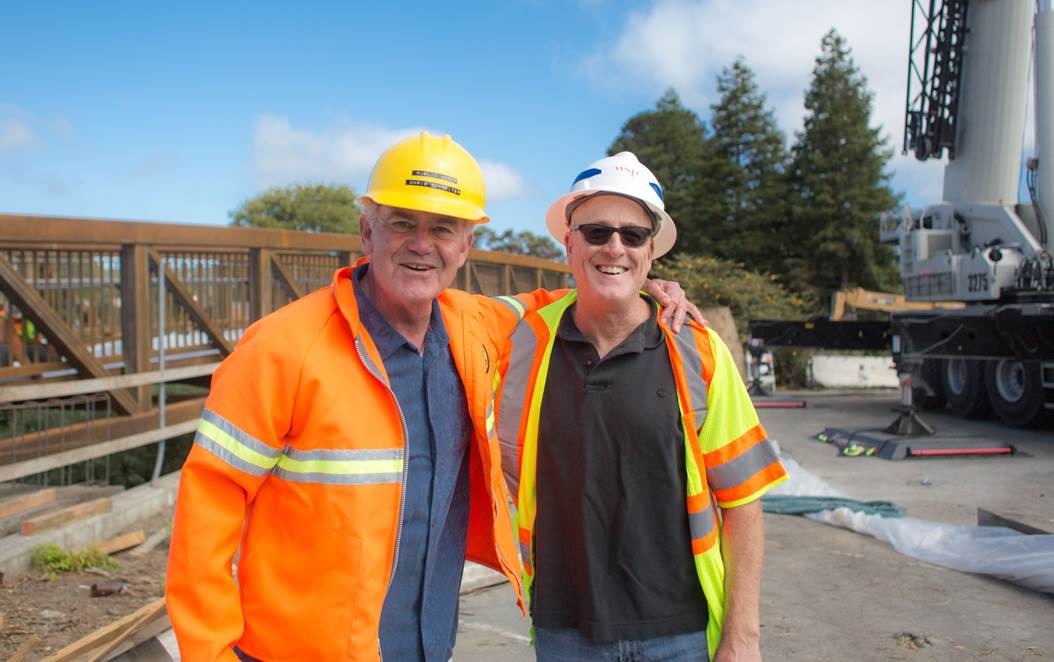 The Santa Cruz Riverwalk’s 5 mile loop was completed in 2017 with the construction of the Branciforte Creek Bicycle Pedestrian Bridge. On January 24, this project and its engineer -City Engineer/Assistant Public Works Director Chris Schneiter (pictured here, left) – each received an American Public Works Association award. Read more in this press release from the City of Santa Cruz Public Works Department:

Public Works Director Mark Dettle is pleased with the double industry recognition. “Chris and his engineering staff have been responsible for hundreds of major improvements in our City over 30 years now—everything from retrofitting and replacing our bridges to the reconstruction of downtown after the Loma Prieta quake to the Branciforte Bike Ped Bridge that earned us 2018 Project of the Year.”

Constructed in 2017, the Branciforte Creek Bicycle Pedestrian Bridge and Multi-Use Trail Project completes the gap in the 5-mile Riverwalk system providing a fully separate pathway for pedestrians and cyclists that keeps them safe from motor vehicle traffic. The project is helping to increase walking, biking and safety in Santa Cruz and supports the City’s new Go Santa Cruz initiative which includes ongoing work to expand active transportation facilities and reduce greenhouse gas emissions. The project construction was funded with a $1.8 million California State Active Transportation Program grant and $400,000 in local Gas Tax funds.

There are no upcoming events at this time.