A Celebration of Exploring the San Lorenzo River this Summer 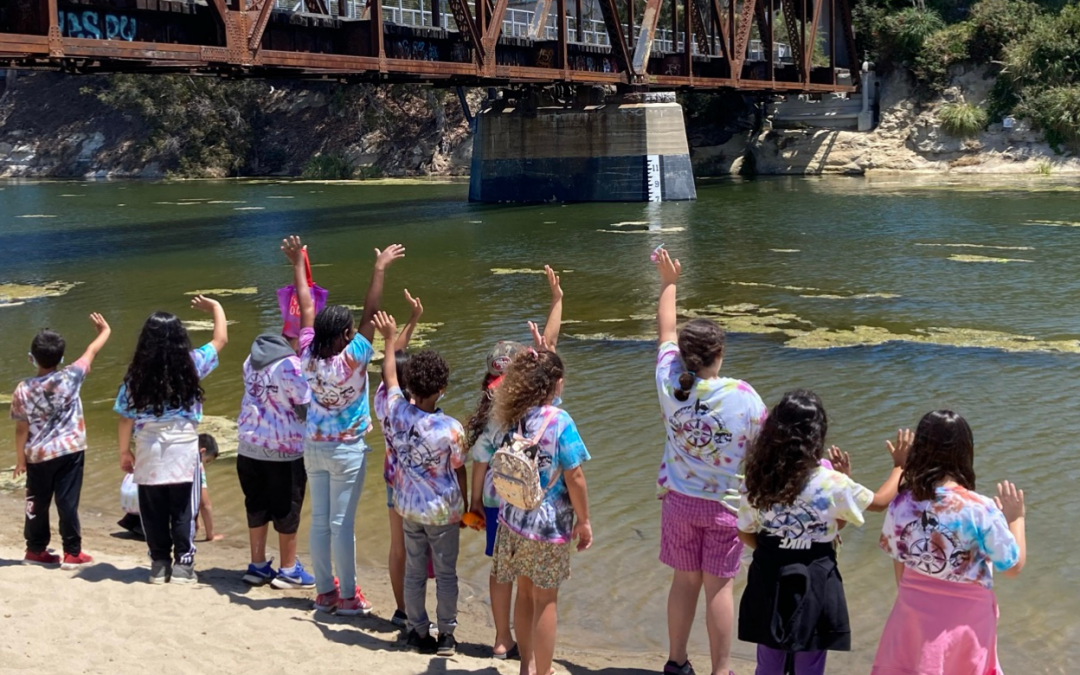 If you walked along the Santa Cruz Riverwalk or the railroad trestle bridge this summer, you might have seen budding scientists investigating the waters of the San Lorenzo River and getting some much needed time outdoors!  This summer, CWC engaged 78 youth in outdoor exploration at the San Lorenzo River. Youth built deeper connections to their local river, built science skills, and enjoyed being out in nature after a year of distance learning.

CWC Environmental Educator Sam Adelson collaborated with the Boys and Girls Club of Santa Cruz County, Nueva Vista Community Resources and the Santa Cruz City School District to lead field trips to the San Lorenzo River. Due to the challenges of the last school year, a key focus of summer camp was supporting student well-being. CWC provided opportunities for students to feel connected to and safe in nature, build social and emotional wellness, and honor youth voice, all while developing science and nature investigation skills. Students chose the activities they were most interested in each day, and this year students:

Youth also focused on supporting the health of the San Lorenzo River and the surrounding community by conducting various forms of environmental stewardship. During the course of the summer, youth contributed to a conversation about why the river is important for animals and nature in general, but also humans. Students shared ways they can protect the river, including using less water, making sure trash and recycling is disposed of properly, riding bikes or using public transportation instead of a personal vehicle, and making sure no chemicals are spilled in nature. Some students took the initiative to pick up trash using a trash grabber along the river’s estuary. While this was not a planned activity, students were so excited to make a difference and asked to pick up litter, that CWC ensured campers had the appropriate tools and training to safely clean up the riverbank.

And of particular note, youth participating in the summer camp at Nueva Vista Community Resources, had a unique opportunity to combine outdoor exploration, environmental science and art to make a lasting difference in their neighborhood. Led by Environmental Educator Sam Adelson, Program Directors Laurie Egan and local artist Irene Juarez O’Connell, campers explored how stormwater moved from their closest park to the river untreated, carrying with its debris and litter. Using worksheets and colored pencils, students brainstormed and drew ideas for a storm drain mural public art project at Poet’s Park. Their ideas were shared with Irene who is designing and painting a mural. You too can help reduce stormwater runoff by helping to paint the mural on August 21st from 12:00-4:00 PM at Poet’s Park. Click here for more information.

The Coastal Watershed Council is grateful for Lidia Montesino (Nueva Vista Community Resources), Katee Freeman (Boys and Girls Club) and Donna Geffken (Santa Cruz City Schools) for their leadership and partnership during this unique summer and their educators who made this summer of exploration possible for the youth in our community. The Coastal Watershed Council would also like to extend appreciation and gratitude to the Moca Foundation and National Oceanic and Atmospheric Administration’s BWET grant program for their generous funding support of the summer programs.